Proposed four-lane road in middle Georgia promoted as traffic reliever for I-20 in Atlanta, helpful to port

Community leaders who advocate for a new highway that would improve access between LaGrange and Macon are pitching the proposed road as a way to ease traffic congestion in Atlanta and freight shipments to and from the state port in Savannah. 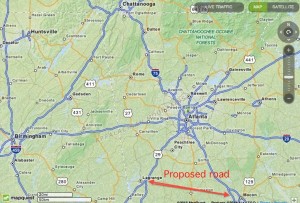 Advocates of this proposed road in middle Georgia say it would promote the state’s economy and ease traffic congestion on I-20 in Atlanta. Credit: Mapquest, David Pendered

The proposed highway earned high marks from the consultant who drafted the recent long-term transportation plan for the Georgia Department of Transportation. For their part, GDOT officials have said the state has scant dollars for major new projects.

But the economic challenge hasn’t stopped two regional commissions – Three Rivers and Middle Georgia – from launching a campaign urging GDOT to conduct a corridor study. Among the reasons they cite for the road is the relief it could provide to I-20 in Atlanta.

“We’ve chosen the tagline, ‘Everybody Wins,’ because this is the one project, along with the port’s deepening, that benefits the entire state and metro Atlanta,” Lanier Boatwright, executive director of Three Rivers Regional Commission, said in a statement.

The proposed highway would be built about 50 miles south of I-20 and parallel to I-20. Advocates have named it the Export/Import Highway. 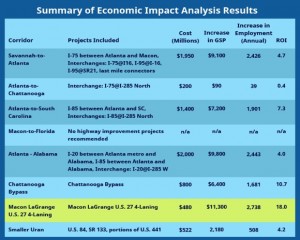 This chart, with the rows enhanced by advocates of the proposed “export highway,” was included in the freight report presented to GDOT. Credit: www.georgiasexportimporthighway.com

A map of the eastern U.S. shows the highway would provide a western bypass around metro Atlanta for long-haul routes between the Midwest and the port of Savannah.

In this scenario, LaGrange could become home to a major new intersection – the new four-lane road and U.S. 27. U.S. 27 would provide a portal to I-20, near the Alabama border, and I-75, near Rome.

Specifically, the road would be a four-lane highway stretching 87.3 miles along an asphalt corridor comprised of Georgia routes 109, 18 and 74. The highway would pass through towns including Greenville, in Meriwether County; Thomaston, in Upson County; and near Culloden, in Monroe County.

The road would cost $480 million to build, in today’s dollars, according to the GDOT report prepared by Cambridge Systematics, Inc. The resulting mobility would provide a return on investment of 18-to-1, by far the highest of eight corridors studied.

The Three Rivers Regional Commission has been working on the project since 2005.

The primary impetus was the Kia Motors Manufacturing Georgia that began production in 2009. Along with creating more than 11,000 jobs in West Point and the surrounding area, the plant has been productive – on July 11, the plant announced a celebration marking the 1 millionth vehicle to roll off the assembly line.

Another driver came in the form of the increased capacity expected to result from the deepening of the Savannah port. More cargo to and from the port is expected from the larger, post Panamax ships that will be built to take advantage of the bigger Panama Canal.

The project was not included in the Three Rivers’ project list to be funded by transportation sales tax because of uncertainty over its inclusion by other districts. The commission included other projects that it could control, while keeping the proposed four-lane highway on the agenda because of its multiple attributes.

“It brings jobs and economic development to middle Georgia and it helps keep freight and truck traffic from increasing the estimated 300 percent on metro Atlanta roads in the next few years,” Boatwright said in the statement.