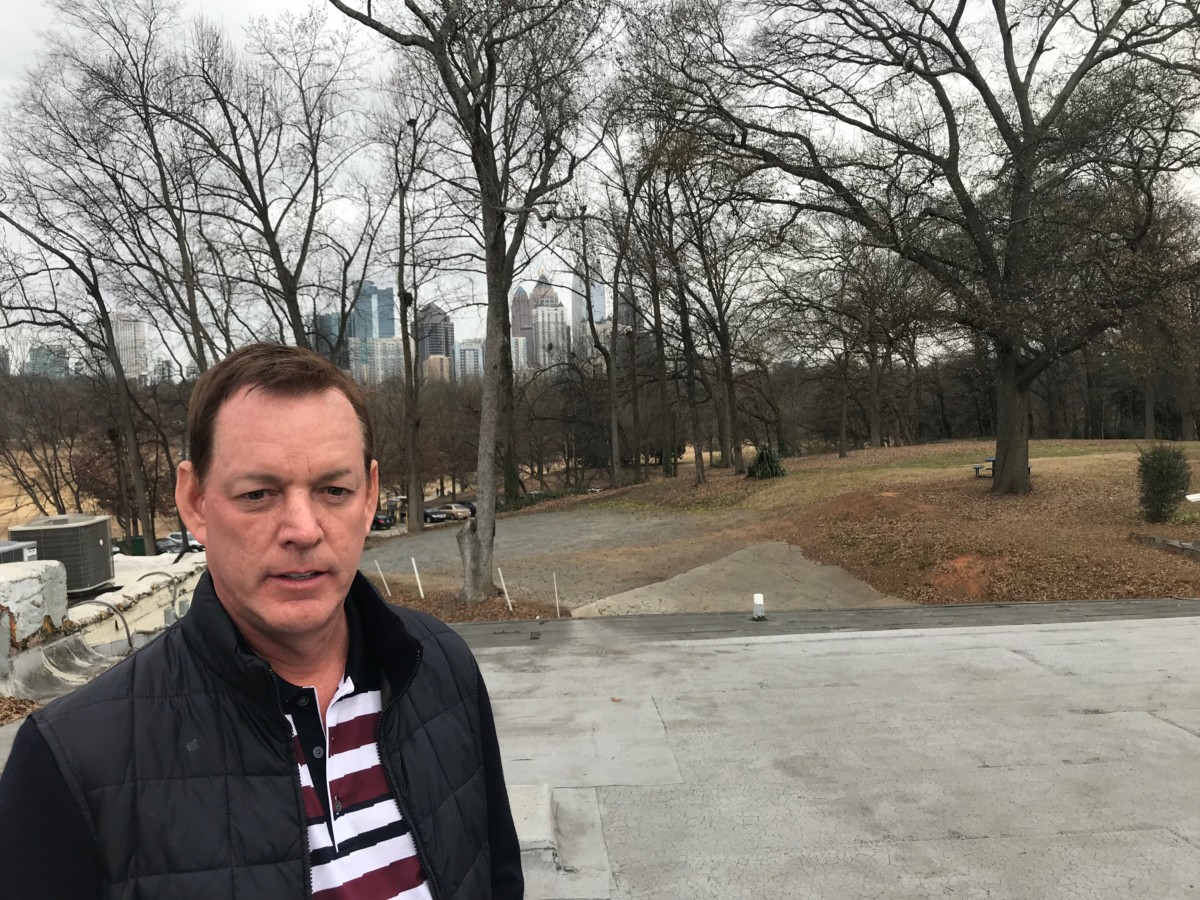 One of the most complicated intersections in Atlanta – where the BeltLine intersects with 10th Street and Monroe Drive – will face even more challenges with a new proposed development on an adjacent 4-acre site.

The plans for the redevelopment became public in December when the Invest Atlanta board approved a memo-of-understanding to sell a 1.47 acre strip of land along the BeltLine to a joint venture of Jim Kegley and Jeff Fuqua for $2.5 million. 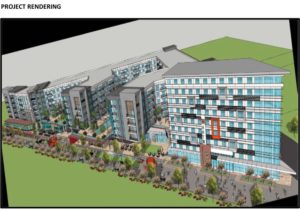 The plans presented at the meeting showed an 11-story hotel with 150 rooms, 351 residential units with 30 percent of them affordable, a 20,000-square-foot grocery store, additional retail and restaurant space as well as 745 parking spaces.

The sale is conditional on the developer getting the property rezoned from single-family to allow for a higher density development.

And the rezoning process will trigger a rigorous public participation process to determine the future of the site – a process that could determine which priorities Atlanta will adopt as it adds population and development.

Already, the impacted neighborhoods around the site (just northeast of the Park Tavern) have pushed back against the proposed plans.

That is not surprising given the history of the site. 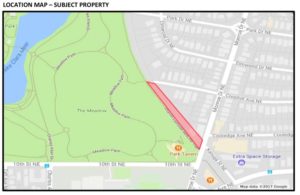 Back in 2008, the city purchased 4.5 miles for the Atlanta BeltLine’s eastside trail for $66 million – largely because of the controversy over a proposal by former owner Wayne Mason and Trammell Crow Residential to build two towers – one 38 stories and the other 39 stories – on this very site.

Every development proposal since then has been unable to garner needed city and community support to become a reality.

Kegley, however, hopes he will have a different result. He and his partners have been buying up land on the triangular site since 2005, and they now own more than a dozen homes, several low-rise buildings along Monroe Drive as well as tree-covered land that abuts the BeltLine trail.

“From a building standpoint, we are still a blank canvas,” said Kegley, who promised to work with the neighborhood and other stakeholders about the development plans for the property. He referred to the proposal presented at the Invest Atlanta meeting as “a placeholder.”

Community leaders have reacted strongly to the proposal that had been presented at Invest Atlanta. 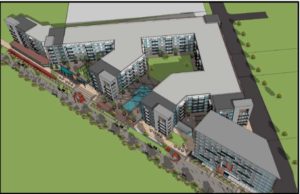 An aerial view of the proposed development (Special: Invest Atlanta)

“Midtown isn’t in support of this project as it is currently proposed,” said Anthony Rizzuto, president of the Midtown Neighbor’s Association. “We were never brought into to the process.”

Most importantly, Rizzuto said it is one of the most “sensitive” sites along the BeltLine because it is next to single-family homes.

Those single-family homes are part of the Virginia-Highland community, which has expressed strong concerns about the original proposal.

“There needs to be a complete re-evaluation of what is realistic,” said Jenifer Keenan, co-chair of the Virginia-Highland Civic Association Planning Committee who lives near the proposed project. “An 11-story hotel is a non-starter. Having 745 parking spaces seems untenable. And this is one of the most dangerous and congested intersections in the entire city.” 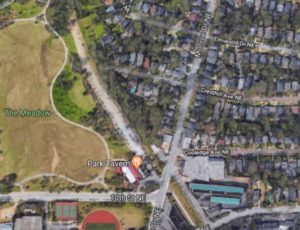 Keenan said the proposed development is not consistent with what had been proposed in the BeltLine’s “Subarea 6” master plan, which had included widespread community participation. A land-used map shows the site as being single-family with medium and higher density along the BeltLine on the east side of Monroe Drive.

Keenan noted that the BeltLine Redevelopment Plan stated that “the majority of residents favor the retention of of this site as greenspace.”  She added that “this proposal is contrary to all the planning that’s taken place.”

Councilmember Jennifer Ide, who represents the district and has heard from her constituents, said she’s trying to remain open minded. She met with Kegley on Friday to tour the site and hear his thoughts.

“Monroe is a busy, dangerous road, and that is a dangerous intersection,” Ide said. “It’s already a problem, and to add more development there without some relief would be a concern.”

Westmoreland said the area already has plenty of grocery stores, and it doesn’t need a 700-space garage. 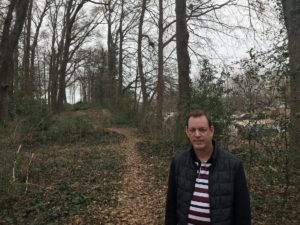 “I’m a firm believer in preserving single-family residences,” Westmoreland said. “We just spent a year going through the City Design process. And it placed a high level of importance in protecting Atlanta’s tree canopy, and I share that desire.”

Kegley did not know how many trees would be cut down for the development, but he acknowledged that nearly all of them would have to go.

“My gut tells me it’s going to be very difficult to save the trees and do anything of consequence,” Kegley said. “This site demands something iconic.”

But Kegley said everything is on the table except his commitment to have nearly one-third of the units being set aside for affordable housing.

“The interest in creating affordable units at the city level is going to drive density. The trees probably don’t survive,” said Kegley, who added they are entering the process with their eyes wide open.

During a tour of the property, Kegley proudly pointed out that it is an incredible site on a hill with great views of Midtown and the park. But few people even know the site is there. 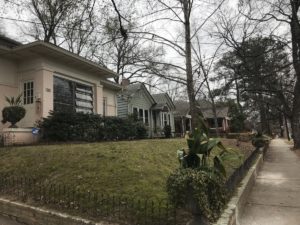 “How do you invite more people to be able to have this experience? How do we create something that’s accessible to everybody,” Kegley said. “For us, this will be our legacy project. I want to leave something that people would say: ‘Wow.’”

But designing such a project with community buy-in will be a delicate balancing act.

“In my opinion, there’s a very small margin of error for a project in this location – if it’s going to be done right,” Farokhi said. “In theory, you want to avoid super-high density next to single-family homes. And we should be mindful of the value that old growth trees have in our city. First and foremost, Virginia-Highland residents need to be heard.”

Another wrinkle is that when this land deal got the greenlight from Invest Atlanta, the City of Atlanta announced it was purchasing about 5 acres at Monroe and Piedmont to expand Piedmont Park to the north.

Coincidentally the BeltLine land-use plan calls for that property to be designated for medium- to high-density development. 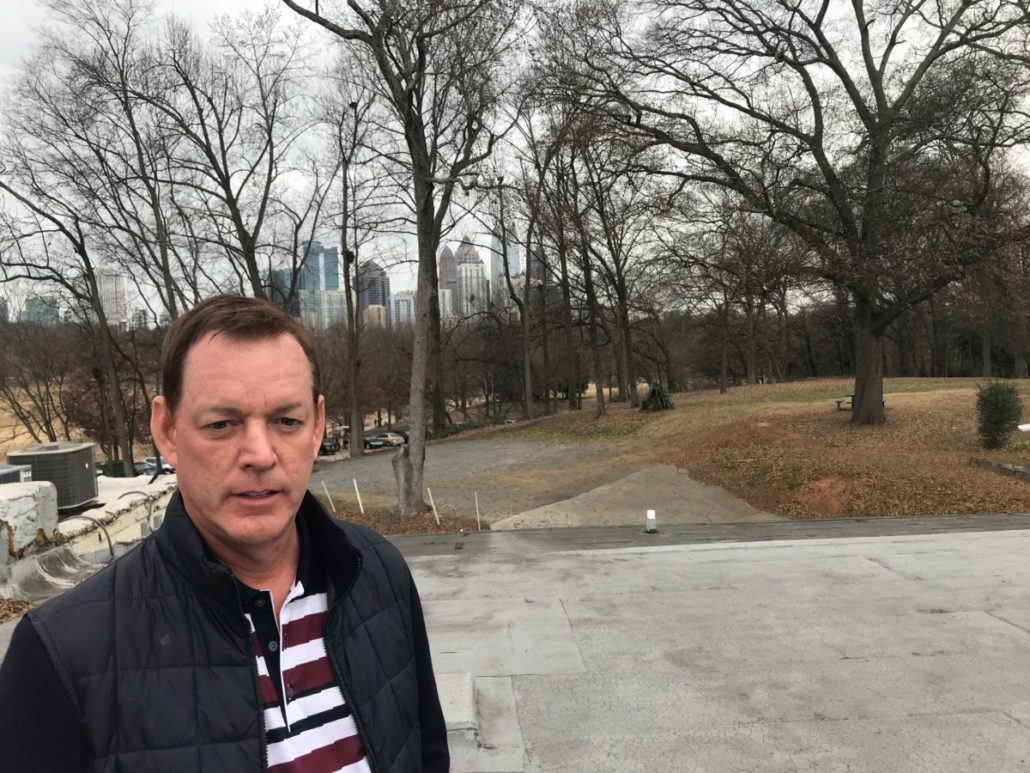 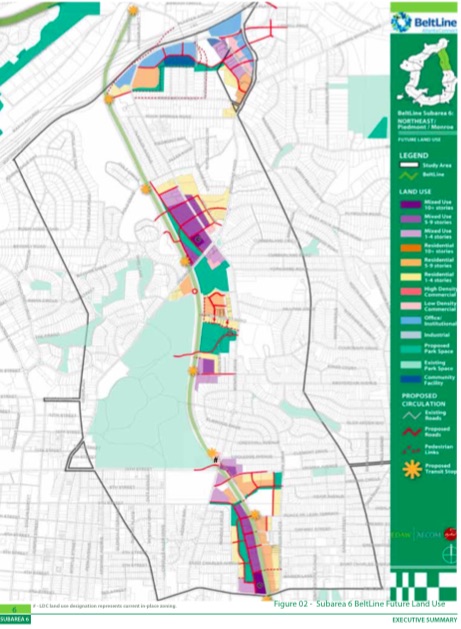 Developers say planned BeltLine project at 10th, Monroe is a chance to ‘get it right’
Jason Marshall February 4, 2018 5:53 pm

Developers say planned BeltLine project at 10th, Monroe is a chance to ‘get it right’