Proud day for future pipefitter: She was graduated and hugged her son

Jacquelyn Treadville-Samuels is on her way to becoming a pipefitter. After commencement Thursday, the single mom hugged her 8-year-old son and said she’s considering a career in underwater welding. 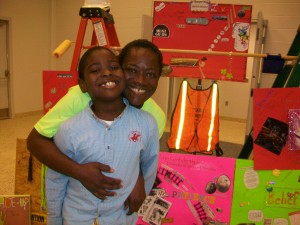 “The pay’s good, and it would allow me the time to do other things, to give back,” Treadville-Samuels said in an auditorium bustling with beaming graduates and their families.

In a sense, these women are front line warriors in the ongoing battle to prove that not all those who are down are their luck are just plain down.

This refrain has reemerged during the debate over the community benefits deal for the Falcons stadium, which is receiving $200 million in construction funds from Atlanta’s hotel/motel tax. According to the refrain, many who live in the downtrodden neighborhoods near the stadium don’t have what it takes to handle a construction job or other work related to the stadium. 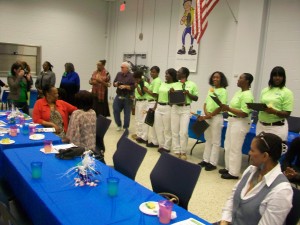 Setting aside jobs for them is pointless, or so goes the refrain.

The pre-apprenticeship program is designed for disadvantaged people who need supportive services. The Trade-Up program is funded by Goodwill Industries International, which in turn received the funding through the Department of Labor’s Women in Apprenticeship and Nontraditional Occupations program.

Georgia is the only southeast state to share in $1.8 million awarded nationally in 2012. Trade-Up’s program has drawn the attention of Emerald Cities Collaborative, a national non-profit working in 10 U.S. cities to promote sustainability and greater economic opportunity. 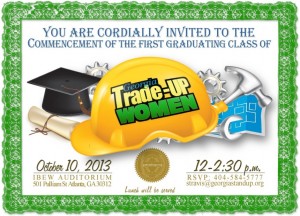 The Trade-Up commencement was a gala affair to celebrate the first all-female class of graduates. Credit: Trade-Up

Some of the social challenges facing the women in the recent Trade-Up class seem endless, which may be why Scott said the organization’s approach is unconventional.

“This is a different kind of program,” Scott told the graduates. “Our first obligation is to give love. Sometimes people say we’re doing too much touchy feely, or too much soft skills. But sometimes we get broken down by the world. We love you, and we are so proud of you. When you educate a woman, you educate an entire community.”

Lisa Brooks, who was the STAR student, described the family challenges created by her taking the class. Her husband stepped up to help with their two children, ages 9 and 4.

Precious Williams made a simple promise to her supporters: “Thank you for all your hard work. It will pay off.”

Britanee Copeland already sees her prospects improving: “Thank you for giving me the skills I’ll need to keep a trade that I’ll have for my entire life.”

Jaynee Roberts said her mentors and classmates saw more potential in her than she saw in herself: “Thank you for believing in me and thinking I could do something that I did not think I could do myself because I’m the girlie girl. Thank you for the many, many, many encouraging words.”

Treadville-Samuels was homeless before she began the eight-week program. She had developed a career in forensic science and had a good job with the Fulton County Medical Examiner before taking a similar job in Alabama, where she moved to care for her mom who had cancer. After her mother died, she returned to Atlanta with her son and became homeless while looking for work.

After the ceremony, Treadville-Samuels’ spirits were as high as anyone who finally sees the horizon after looking at a lot of walls.