PSC Commissioner Tim Echols, who normally helps set utility rates, recently convened a panel of state and regional leaders to discuss the trafficking of children and look ahead to solutions. 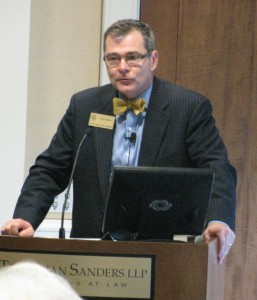 “There is no nexus between the PSC and the sexual exploitation of children, but as a constitutional officer in the state of Georgia I believe it is my duty to uphold the constitution that says, ‘Wisdom, Justice, Moderation,” Echols said after the Lunch and Learn event he hosted May 9 at the Troutman Sanders law office in Atlanta.

During the two-hour discussion, GBI Director Vernon Keenan said metro Atlanta has a high national ranking for prostitution because the state takes the crime seriously. Sen. Renee Unterman (R-Toccoa) said the Legislature will resume its law-making on the topic next year, after it “stepped back” in this election year.

There is reason to think the future can be better than the past when it comes to the trafficking of children, according to several speakers on a panel that included a federal judge, a district attorney, and leaders of several civic organizations. Sen. Mike Crane (R-Newnan) spoke and his daughter, Caitlin Crane, performed her just-released song, “Break the Chains,” which aims to raise awareness of human trafficking as part of the Just1 campaign she started.

“This is not a new topic; what is new is that we are going at it methodically to actually change it, and this change is sustainable,” said Cheryl DeLuca-Johnson, president/CEO of Street Grace, a faith-based organization based in Norcross that’s working to end the trafficking of young people in metro Atlanta and across the nation. 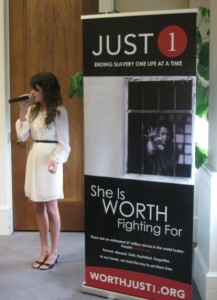 Another reason for hope is the strength of the victims, according to Mary Frances Bowley, president and founder of Wellspring Living, an Atlanta-based organization that helps victims recover from the trauma of their experience. Bowden described success stories of the many victims who receive counseling continue their education, graduate from college and go on to lead productive lives.

Children are the victims in this criminal enterprise and their protection is the focus of Georgia’s law enforcement efforts, Keenan said. The Georgia Bureau of Investigation is promoting specific language to reflect the evolution in thought about child exploitation, he said.

Echols had begun arranging the event months before the recent kidnappings in Nigeria seemed to focus the world’s attention on the human trafficking of children. The event coincides with the recognition the Rotary Club of Atlanta recently received from U.S. District Attorney Sally Yates for its work in the trafficking arena, as well as a recent day-long seminar on trafficking convened by two area chapters of Delta Sigma Theta Sorority, Inc.

Echols, elected to the Public Service Commission in 2010, said his interest in the issue stems from being the father of seven children and his desire to continue in the anti-slavery footsteps of an 18th century British politician. 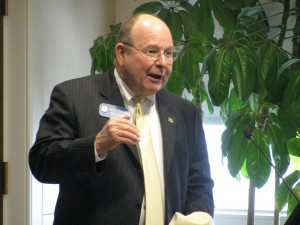 “William Wilberforce built a larger and larger consensus of people to fight the slave trade in Great Britain,” Echols said. “He worked with charities and abolitionists. We have gathered many different people here today. … It’s worth my time, my personal support, my political capital to pull people together to fight this.”

U.S. District Court Judge Timothy Batten said he’s has no expectation that child sex traffickers can be rehabilitated, and only a grim conclusion concerning the best way to punish them.

“People who do this are sociopaths,” Batten said. “They cannot be corrected and they cannot be fixed. My job is to be a blunt instrument and get them off the street. I wish I could say I have a solution. It’s going to take resolve on the part of good people to stop this. Because there is no good, at all, in the hearts of some people.”