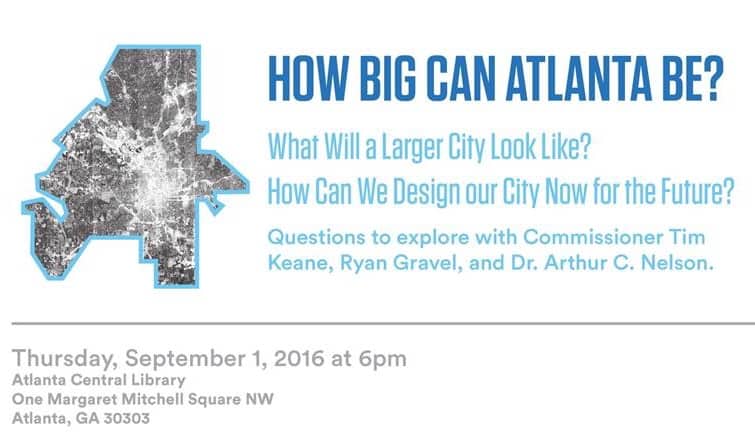 The Atlanta City Design Project will invite local residents to hear a national perspective from an outsider.

On Sept. 1 at 6 p.m. at Atlanta’s Central Library, Arthur C. Nelson, a professor of urban planning and real estate development at the University of Arizona, will help Atlanta answer several key questions as part of the City Design Project.

How big can Atlanta be?

How can we design our city now for the future?

Just for the record, Nelson is not really a total outsider.

From 1987 to 2002, Nelson was was Professor of City and Regional Planning in the College of Architecture at Georgia Tech . He also was a Professor of Public Policy in the Ivan Allen College of Liberal Arts at the Georgia Institute of Technology. During his last two years in Atlanta, from 2000 to 2002, Nelson also served as an Adjunct Professor of Law at Georgia State University. He co-founded the nation’s only bi-university dual master of planning (Georgia Tech) and juris doctor (Georgia State) degree program. 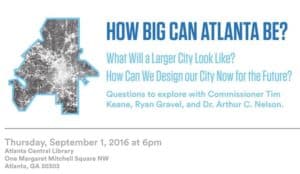 In 2002, he went to Virginia Tech to become the university’s Director of the Urban Affairs and Planning program, where he stayed until 2008. That’s when Nelson went to the University of Utah, serving as a Presidential Professor of City and Metropolitan Planning at the University of Utah, serving as the founding director of the Metropolitan Research Center. from 2008 to 20014. He’s been in Arizona since 2004.

Tim Keane, Atlanta’s Commissioner for Planning and Community Development, said the Sept. 1 event will serve as the kick-off to a series of meetings to get people involved in the City Design Project. Both he and Ryan Gravel, who is coordinating the City Design Project for the city, will be part of the program on Sept. 1 along with Nelson.

“We had talked from the beginning how it would be good to get someone from outside of Atlanta to critique what we are proposing to do,” Keane said.

In short, Keane said the city expects to more than double its population from its current population of 460,000 in the next 20 to 25 years. The Atlanta region is expected to add 2.5 million people in that time frame, and Keane said societal circumstances are driving  more people to live in the center of the region.

Atlanta has the opportunity to design the kind of city it wants to be with such an increase in population.

“If we keep growing like we have for the past 50 or 60 years, Atlanta will be less appealing,” Keane said.

Several large cities already have much of their design in tact – San Francisco, Chicago and New York.

“We kind of know what some cities are going to be like 20 to 25 years from now,” Keane said. “Thinking about Atlanta, you can reasonably say: ‘I don’t know how Atlanta is going to be.’”

The Atlanta City Design Project will be a multi-layered initiative – beginning with the natural ecological profile of the area. It will then seek to figure out how transportation, infrastructure, green space and development will impact the city’s design. Georgia Tech’s Center for GIS will help model the different design options for Atlanta.

Keane hopes Nelson will address whether City Design Project is a “reasonable endeavor” for Atlanta.

“I don’t know what he’s going to say,” Keane said. “I’ve never talked to him before. I think it’s going to be fascinating for the City of Atlanta.”

The effort also will tackle difficult issues from parking, green space, preservation, balanced geographic growth, diversity of Atlanta’s population as well as making sure the city is more equitable for all its citizens.

The City Design Project is expected to take about a year to complete, and it likely will serve as the foundation for updating and replacing Atlanta’s existing zoning ordinance.