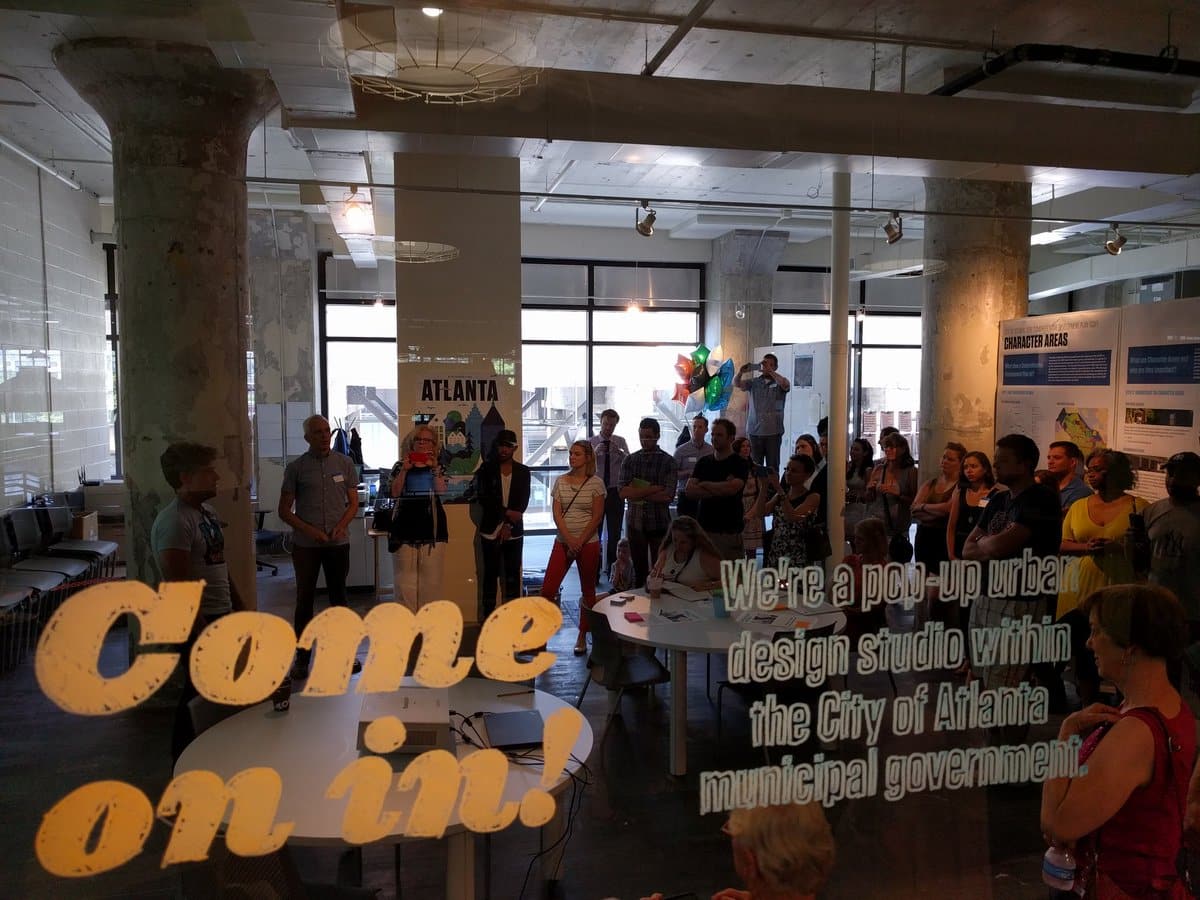 "Come on in" - the public is welcome to help in the design of Atlanta's future (Photo: Atlanta City Design Studio)

The public is invited.

Atlanta is undergoing an unprecedented planning effort – to envision a city with twice as many residents.

The Atlanta City Design Studio, located above the food market at Ponce City Market, wants people to participate on how the we want to grow our city.. The twitter account is @ATLCityStudio.

Atlanta residents are being asked a series of questions (see below) to get as much public participation as possible.

“We want to engage the residents on what is really great design,” said Tim Keane, the city’s planning commissioner. “We have no interest in making Atlanta into something it isn’t. The city is growing. We know it. We see it. We want to use this space – the Studio – as the community’s space in issues around design.” 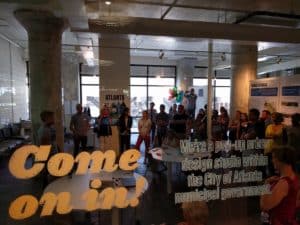 Ryan Gravel, who is leading the design effort, said he would like the public to share with the city its thoughts on what makes Atlanta special.

The city will then take those thoughts and incorporate them into an overall design for the city, and that also will help the city in drafting a new zoning ordinance.

Meanwhile, a parallel planning effort is underway in the westside – in the communities west of the new Mercedes-Benz Stadium that is now under construction.

The Westside Future Fund has hired Dhiru Thadani, an internationally-respected architect and urbanist, to conduct a deep dive on several communities – including, Vine City, English Avenue, the Atlanta University Center, Ashview Heights, Washington Park and a small community known as “Just Us” neighborhood.

That planning effort also has been working with community residents to help design their future.

On Friday, July 1, Thadani made one of several presentations that he will be making at the Transform Westside Summit.

“There really is wonderful building stock all over the westside and with just a little tender love and car, they can be brought back,” Thadani said.

He went on to describe ways to improve pedestrian and bicycle mobility in those communities. Some communities are in greater need than others. As Thadani said, Just Us is “really in-tact” that only needs minor improvements, such as better street lighting and sidewalk repair.

“We have not forgotten about you,” Thadani told one resident who wanted to know whether the plans would change on of the neighborhood’s features – its concrete streets. “There are other areas that need more attention.”

For the past two or three decades, Atlanta has not excelled at getting public involvement in its planning process. The 1996 Summer Olympic Games was largely a top-down planning effort.

The Atlanta BeltLine has had a series of planning efforts – some that involved the public better than others. 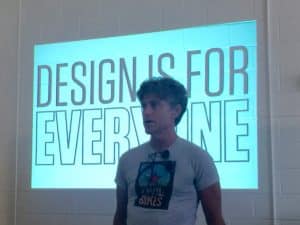 There was virtually no public involvement in the decision to sell 330 acres at Fort McPherson to movie maker Tyler Perry. And the Turner Field redevelopment for Georgia State University was pretty much decided before the community was brought in.

(After this column was published, I got an email from Andrew Scott Dietz, who works with Perkins + Will, asking for a clarification on what I wrote about Turner Field. His email is in italics at the end of this column).

But now we have an open invitation to help in Atlanta’s redesign. We need to share our views, our thoughts, our preferences – letting people help mold the way our city will grow in the future.

The Atlanta Design Studio will be based at Ponce City Market for the next six months – thanks to donated space from Jamestown. Keane said the studio will be moved to other spots around the city “because we know design is for everyone.”

The design process will continue through September, 2017 – about three months before Atlanta elects its next mayor and city council members.

The goal of community leaders is that the process is embraced by those running for mayor so all this will be able to continue beyond Mayor Kasim Reed’s administration.

When asked about the questions being presented to the public, Gravel said the specific questions “are less important than hearing ideas about Atlanta’s future that resonate with lots of people.”

The questions will be presented to communities through formal channels – including the Neighborhood Planning Unit network. And Gravel said new questions may be added to the list.

Here are the questions:

Email from Andrew Scott Dietz of Creative Growth Group, Inc.
Hi Maria,
While I am always appreciative of your scrutinizing eye on the developments in our city, there is a statement you made in today’s article about public participation in the des that obscures the truth:  “And the Turner Field redevelopment for Georgia State University was pretty much decided before the community was brought in.”
You are correct that the public was not consulted in the decision to sell the Turner Field property. Nevertheless, the sale was conditioned on the bidder’s commitment to engage in the community-driven LCI process and the design ideas it would generate. The development RFP language specifically makes reference to this commitment, to incorporation of the LCI results into the final proposal, and to respondent participation in the LCI process.
The Perkins+Will team (my client) had been selected to organize an intensive and collaborative LCI design process prior to the preliminary section of Carter / GSU. That design process eventually included participation from hundreds of citizens living in the affected neighborhoods, as well as representatives from GSU and Carter.  More Atlantans voiced their design preferences at Streets Alive. The high degree of public involvement and collaboration led to the city’s request to feature LCI interactive tools and design concepts at the City Studio, which you certainly must have seen.
It is exciting that so much positive planning and design is happening in the city. It is also reassuring that many of the city’s less visible but no less talented practitioners that are in the trenches daily are elevating the dialogue and breaking new professional ground.
Thank you,
Andrew
Share228
Tweet17
Share59
Pin
Pocket
WhatsApp
Buffer4
Email
Reddit
308 Shares