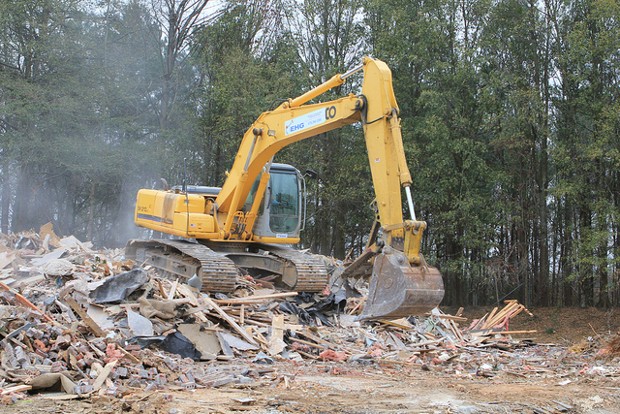 The city of Marietta marked the tearing down of the last building at the Preston Chase apartment complex on Franklin Road Dec. 15, 2010, to make way for a new city park. Photo courtesy of the City of Marietta.

In Atlanta’s northern suburbs, thousands of renters have been displaced due to apartment demolitions during the last eight years. In an essay published last week by local web journal Atlanta Studies, Scott Markley demonstrates that these demolitions—including several complexes in Brookhaven, Sandy Springs, and Marietta—have an outsized impact on nonwhite residents, particularly Hispanic renters.

Markley, a PhD student at the University of Georgia, contextualizes the demolitions within the region’s long history of white flight and residential discrimination and argues that municipal strategies have recently shifted from using exclusionary tools like certain zoning restrictions to actively removing residents—“the latest chapter in an ongoing saga wherein white suburban leaders limit nonwhite access to space by implementing policies that enhance white residential exclusivity.”

I chatted with Markley about his essay, “From Exclusion to Expulsion: Demolition, Displacement, and Race in Atlanta’s Northern Suburbs,” and what suburban apartment demolitions mean for the region. (Note: This interview has been edited and condensed for clarity.) 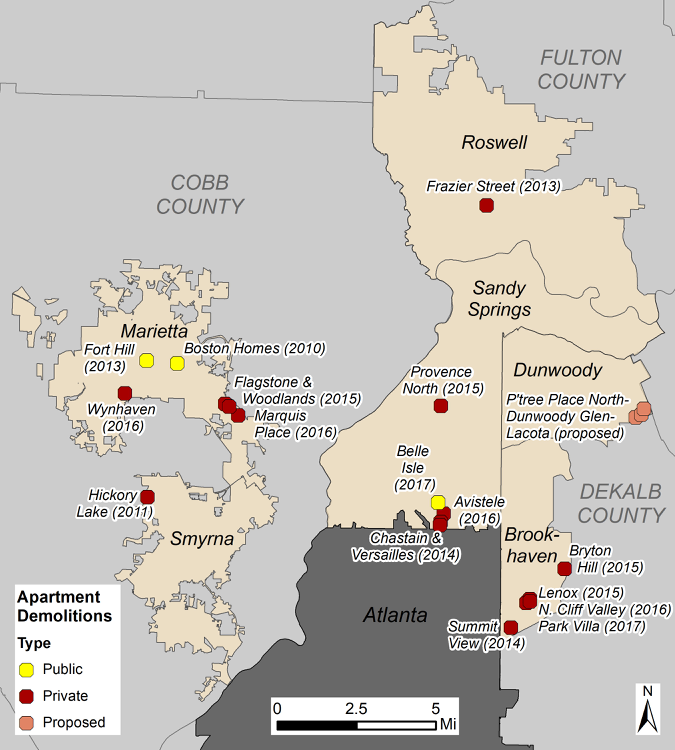 The essay connects the demolitions—which are along major thoroughfares like Buford Highway and Roswell Road—to Kevin Kruse’s book White Flight, which explains the racist roots of the region’s housing segregation. How do these demolitions fit into Atlanta’s larger history?

Scott Markley: The history of this, particularly in the suburbs goes back quite a while with the way zoning ordinances are written. Over the past half century, as suburbanization in Atlanta started taking off in full flight, zoning ordinances, for example, have been written in ways that implicitly exclude certain racial groups. When these areas were receiving large increases in population in the mid–20th century, they were simultaneously writing into the laws ordinances like minimum lot sizes and segregating land uses, like segregating apartment complexes away from other single family homes in ways that more or less contained the residents in those areas and excluded racial minorities from other areas.

Later on, this comes up in the motions to expand MARTA and transit, which has historically been denied, famously in counties outside of Fulton and DeKalb, because of all the racial undertones in that discussion and talking about how transit expansion will bring crime, etc. And so, we’ve got these different iterations through history, these different policy vehicles that have been employed that have implicitly excluded racial groups. Now, in this more recent era, I’m arguing that apartment demolitions is a new chapter in this story where, instead of excluding racial groups, it’s actively removing them from municipalities. I think this most recent chapter needs to be understood in the context of that longer history of trying to pass legislation that excludes groups in order to fully be appreciated.

Your essay analyzes the racial composition of those apartments that have been demolished and finds that Hispanic renters comprised nearly 60 percent of the 9,000 people displaced. While this may not affect all of those renters, especially in areas in DeKalb County—which has the second-largest number of ICE arrests in the country—how might a tenant’s immigration status play into this issue?

SM: Across these places, why is it predominantly Hispanic-occupied apartments that are being demolished? Why are they the ones being targeted? One answer that I don’t know can be proved but is worth considering is that, at least from a political standpoint, those groups are the line of least resistance. I could imagine that, because those populations are more precarious in general, there’s probably a perception that if you evict people, they’re not going to have recourse, particularly if they’re undocumented. So, I certainly think that the respective city council members approving the demolitions are at least aware of that and are aware that the populations are probably immigrant populations that are less able to mount a political opposition.

What’s the reasoning for demolishing these apartments, many of which are aging or in need of maintenance? Is tenant safety a major factor?

SM: I see safety coming into play sometimes, thought not in every case in general. When I see safety raised, I often read it almost cynically: The main reasons being discussed are economic development, reduction in crime, etc. And then someone might raise the point of, “Hey, what about these residents?” And they’ll say, “Well, it’s actually for them, too, because you have to think about their safety. We’re actually doing them a favor.” And so, I’ve seen that deployed in a way that I read as cynical. 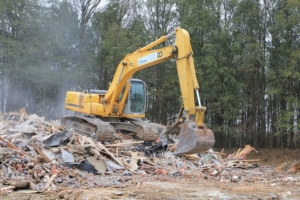 The last building of the Preston Chase apartment complex on Franklin Road was torn down on Dec. 15, 2010, to make way for a new city park. Photo courtesy of the City of Marietta.

But as far as places like those in Dunwoody, there are some work code violations, and some of these places actually have conditions that could be  considered hazardous for the residents that live there. I think that is a real concern that should be taken into account, but I don’t think demolishing them is the answer there. I think that’s using that as an excuse to say you’re actually doing the residents a favor.

Why is the outsized racial impact rarely at the forefront of discussions about demolition?

SM: The best explanation I have is that people, particularly city council members, are generally very uncomfortable discussing race. And when an issue like apartment demolitions, which is very racial, comes up, it’s much easier to gloss over that and talk about it in other terms that obscure the racial dimensions—terms such as economics, crime, school quality, all of these other things which kind of function as a proxy for race or signal race. I think people and, in general, policymakers are much more comfortable with speaking in that language because it’s generally accepted, and there’s not as much pushback when you don’t explicitly discuss race. That’s not a new thing. That’s been the way race has generally been discussed in the United States, at least over the last 50 years. The tendency is to not bring up race.

A lot of times, when people talk about gentrification or redevelopment or whatever you want to call it in these places, they treat a displacement as some sort of unfortunate byproduct. But I think what some of these apartment demolitions show, what I’m really trying to illustrate, is that the displacement of people is actually central in that project. A redevelopment project in some of these places that does not displace people would not be considered a fully completed project. I think it’s important to think about the displacement and expulsion of people from these communities as central to the project—not just as an unfortunate byproduct.