Two spirited Georgia women of the post-Civil War era are remarkable for the clarity of their voices, their roots in the state, and their achievements. If in some ways they are alike, they are also profoundly different.

Eliza Frances (“Fanny”) Andrews was born in 1840 in Wilkes County; Kathryn Du Pre Lumpkin was born in 1897 in neighboring Oglethorpe County. Each benefited from the prominence of their families. Each lived long and productive lives of much consequence — lives bound up with place and time that make them uniquely southern and Georgian. But they came to different conclusions on race, one of the burning issues of their day. Andrews was a white supremacist; Lumpkin was an advocate of racial equality.

How do we explain such variances as we look back on the paths taken in personal lives, and paths not taken?

Fanny Andrews enjoyed the carefree childhood of one born into the pre-Civil War world of southern privilege. Her father was a highly regarded judge; he also owned 200 slaves, a cotton plantation, and “big house” in the influential community of Washington, in Wilkes County. There, Andrews received a classical education at the local academy and afterward, earned a degree from LaGrange Female College (today LaGrange College). She read French, Greek, and Latin, and had close familiarity with the classics of English, French, and American literature.

The Andrews family associated with the elite of the countryside — the Toombses, Semmeses, Tuppers, Barnetts, and Ficklens, Georgia’s ruling class.

Eliza Andrews’s diary is an important first-hand account of the Civil War home front in Georgia.

The state’s secession from the Union divided her family, as it did many in Georgia. Her father opposed secession, believing it would be the ruination of the South and of their privileged lives, a position he never veered from. Nevertheless, secession fever swept up the rest of their household, including Andrews and her siblings (three of whom served in the Confederacy).

Near the end of the war, Andrews began keeping a diary, one that in time made her famous. With an insider’s view, she proved a talented writer and astute observer. Her War-Time Journal of a Georgia Girl, 1864-1865 is one of the truly important published diaries of the Civil War home front. Filled with equal parts praise and vitriol, she sang the virtues of the Confederacy and the slaveholding South and damned the Yankees as she painted a picture of a war-torn home front.

In the words of New Georgia Encyclopedia editor John Inscoe, her diary is especially notable for the description of “her harrowing retreat from her home in Washington; as [Sherman’s] Union forces approached, she moved across ravaged areas to find refuge at her sister’s plantation in the southwestern part of the state.”

Returning home in April 1865, she documented Confederate president Jefferson Davis’s passage through Washington while being pursued by federals, the eventual Union occupation of her town, and the freedmen of the county who flocked to the Union encampment, leaving behind their former masters. And she describes the wandering masses of Confederate soldiers after Lee’s surrender, passing literally through their back yard, most on foot with no provisions, tattered clothes, and homes as far away as Texas. 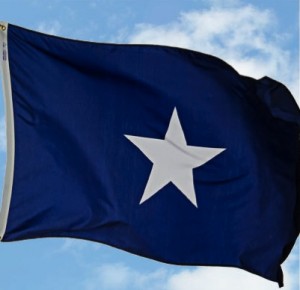 Eliza Andrews and her friends secretly sewed a Bonnie Blue flag in the days before secession.

The diary is filled with Andrews’s fiery, spirited persona that surely contributed to Margaret Mitchell’s depiction of the character Scarlett O’Hara (Andrews’s hair was red, incidentally). It is hard to imagine that Mitchell, a journalist and writer, would not have read War-Time Journal (published in 1908), a well-known book written by a respected female author from her own state.

After the war, with her family “near-penniless,” Andrews (also not unlike Scarlett) set out on her own. In her diary she announces that marriage “is incompatible with the career I’ve marked out for myself.” Never mind that there were few males of marriageable age; the former antebellum belle was about to create for herself a new kind of southern life, one of almost defiant independence outside of one of society’s most sacred institutions.

For a time she lived near a brother in Alabama, teaching school. She moved back to Washington to recuperate from a serious illness, and then took a job as a newspaper editor, only to be fired later when the owner discovered she was a woman (she had used a pen name).

By this time she was already writing with some earnestness, placing articles in regional and national journals and newspapers on topics humorous and witty but also serious. She even completed two novels and had started work on a third.

Then Wesleyan Female College in Macon (today’s Wesleyan College), the world’s first degree-granting institution for women, conferred on her an honorary degree for her expertise in Latin, French, and literature. An invitation to teach at Wesleyan followed, which she gladly accepted in 1885.

By now she was gaining literary notice not only in the South, but also nationally. With a modest financial independence from her books, she retired in 1896 to focus on her love of botany, writing textbooks as well as scholarly articles on the subject. She also occasionally taught in Washington’s local academy.

In 1911 she relocated to Rome, Georgia, to be near a brother and to continue her work in botany. In 1927 the International Academy of Literature and Science nominated her as a fellow, the first American woman accorded that honor. She died in 1931, at the age of 90.

Andrews’s long and remarkably productive life spanned antebellum Georgia to the eve of the New Deal (1840-1931). It also abounded with contradictions. Living out a professional career as a single woman, giving her the freedom she craved, she opposed ratification of the 19th Amendment (1920), which gave women the freedom to vote.

She was educated and cosmopolitan, traveling around the United States and in Europe, yet like many in her day, remained strongly bigoted. Fears of race war consumed her, and she actively promoted separation of the races and black disfranchisement, which became a reality when Georgia amended its state constitution in 1908. 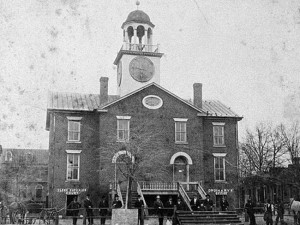 The Wilkes County courthouse was built in 1817. When Georgia seceded, Eliza Andrews’s Bonnie Blue flag of rebellion was hoisted outside the courthouse.

She never tired of praising the aristocratic gentility of the Old South, though she identified herself (as did Who’s Who) as a “Socialist.” Indeed, she mocked the rise of Henry Grady’s “New South” as just another ploy of northern industrialists to accomplish their true Civil War goal of making “wage slaves” of everyone. (Like a good Marxian, she saw the elimination of chattel slavery as just the first step).

Perhaps the biggest paradox of all is that one of such a keen mind and independent spirit, one who was so immersed in the classics of Western civilization and who thrived on freedom, would be so unwilling to see freedom extended to others like her, white and black.

But perhaps this is not a matter of paradox at all, but a universal story in its local setting. Her fondest lifelong memory was the thrilling “secret” that she kept from her pro-Unionist father. In the days before Georgia officially seceded, she and her young friends secretly stitched a “Bonnie Blue” flag of rebellion. It was this flag that townspeople joyfully hoisted atop the county courthouse the day secession was announced, as she proudly looked on.

Some secrets can torment. For her, it was defining. For all of Andrews’s extraordinary “modern” ambition and supreme scientific accomplishment, she remained an unapologetic voice for an Old South. She would not, or could not, emerge from under the plantation’s long shadow of patrician class and racism.

In the next column we’ll look at Katherine Du Pre Lumpkin, whose experience of Georgia and the South led her in a different direction, one that included transformative possibilities.

Previous Article
At Beatles v. Stones, the anchoring power of music and memory
Next Article
Election year set to start with a bang