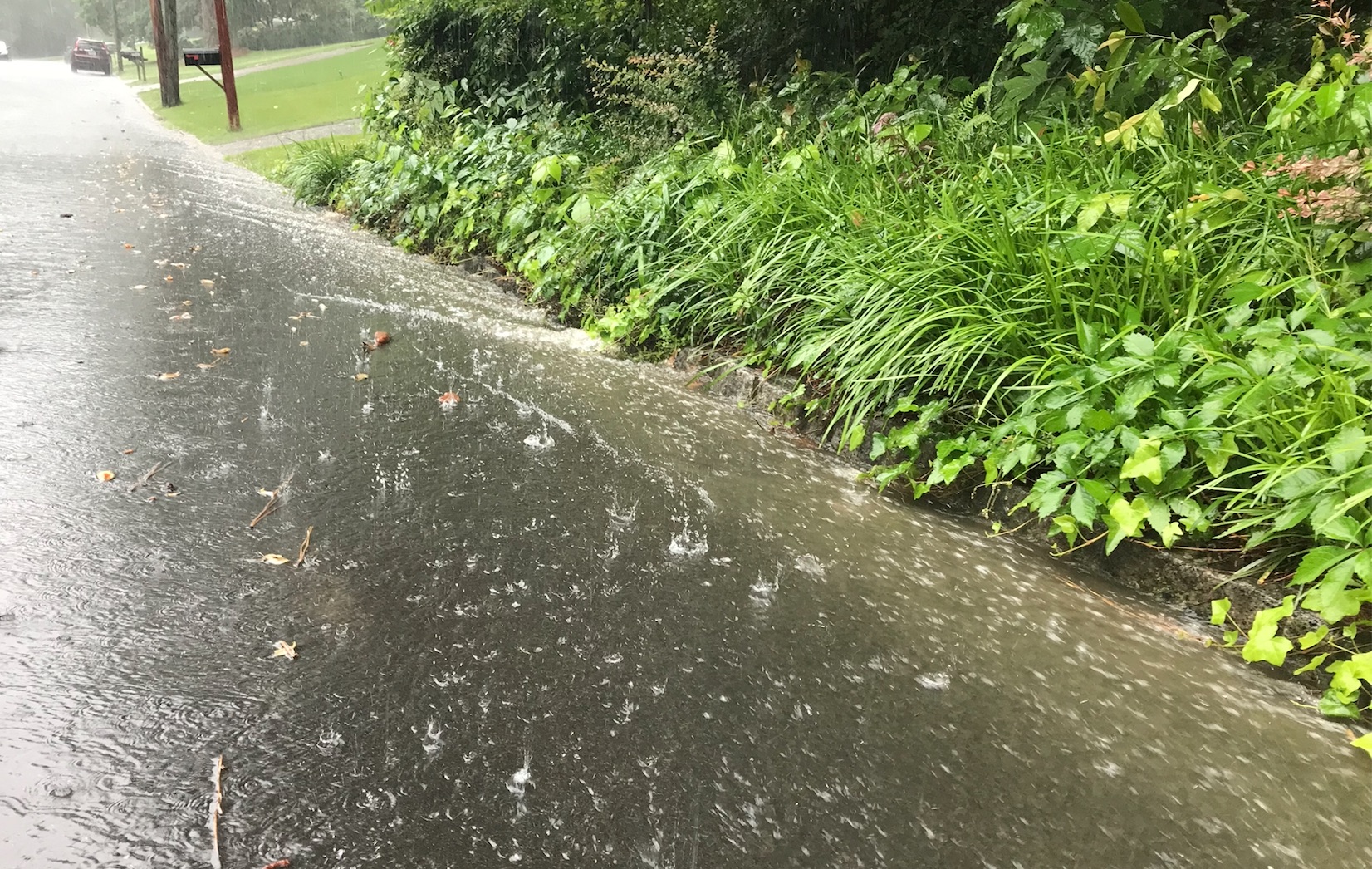 As amazing as it may seem after heavy rain on Sunday and previous weekends, federal reports show the cumulative rainfall in metro Atlanta is about on track for this time of year, while moderate drought conditions are emerging in portions of Middle and South Georgia. 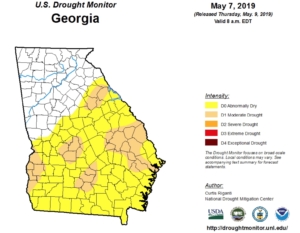 Conditions of moderate drought and abnormally dry were reported across Middle and South Georgia in the May 7 edition of the U.S. Drought Monitor. Credit: droughtmonitor.unl.edu

This dry area includes farmland where crops were devastated by wind and rain from Hurricane Michael in October 2018. The dry conditions are evident in soil moisture reports, where the May 6 report by the U.S. Department of Agriculture observes the soil moisture is short or very short in a third of the area covered.

Rainfall amounts are more typical in metro Atlanta. Parts of North Georgia have recorded rainfall amounts well above average. That includes Union County, where more than 8 inches of rain above the mean was recorded during the first three months of the year.

Here are the anomalies of rainfall for the January through March period for the five counties that comprise metro Atlanta’s urban core. The figures represent inches above or below the mean rainfall recorded from 1901 through 2000:

This climate information, and more, is available from a fairly new website provided by NOAA. NOAA’s newly formed National Centers for Environmental Information began providing in November 2018 a Climate at a Glance report for each of the nation’s counties. 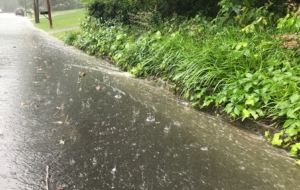 Pam Knox, an agriculture climatologist with the University of Georgia’s Department of Crop and Soil Sciences, highlighted NOAA’s site in her post on May 7.

Knox also provided a weekend forecast in her May 11 report that summarized both the potential for heavy rainfall and the relief it could provide areas of Georgia that are approaching drought conditions. Knox reported:

Moderate drought conditions affect roughly 40 counties in Middle and South Georgia, according to a count of counties in the latest report from the U.S. Drought Monitor.

Abnormally dry conditions affect all remaining counties in Middle and South Georgia, according to the report.

All the afflicted counties are located south of the Fall Line, the former coastline of Georgia that stretches from Augusta to Macon to Columbus along a corridor that’s about 20 miles wide, according to a report by georgiaencyclopedia.org.

At a big box home supply store in Chamblee, children pulled carts while adults filled them with a few plants and bags of fertilizer. It wasn’t a big shopping trip for most, and they arrived well in time to get what may be their last plants of the season in the ground before dark. 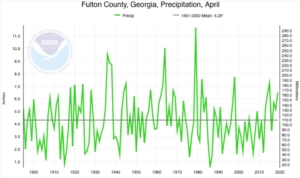 The green line shows the rainfall recorded in Fulton County in the month of April for the years 1895 through 2019. The horizontal line represents the mean rainfall in April during the period. The website provides similar reports for every county in the nation. Credit: ncdc.noaa.gov