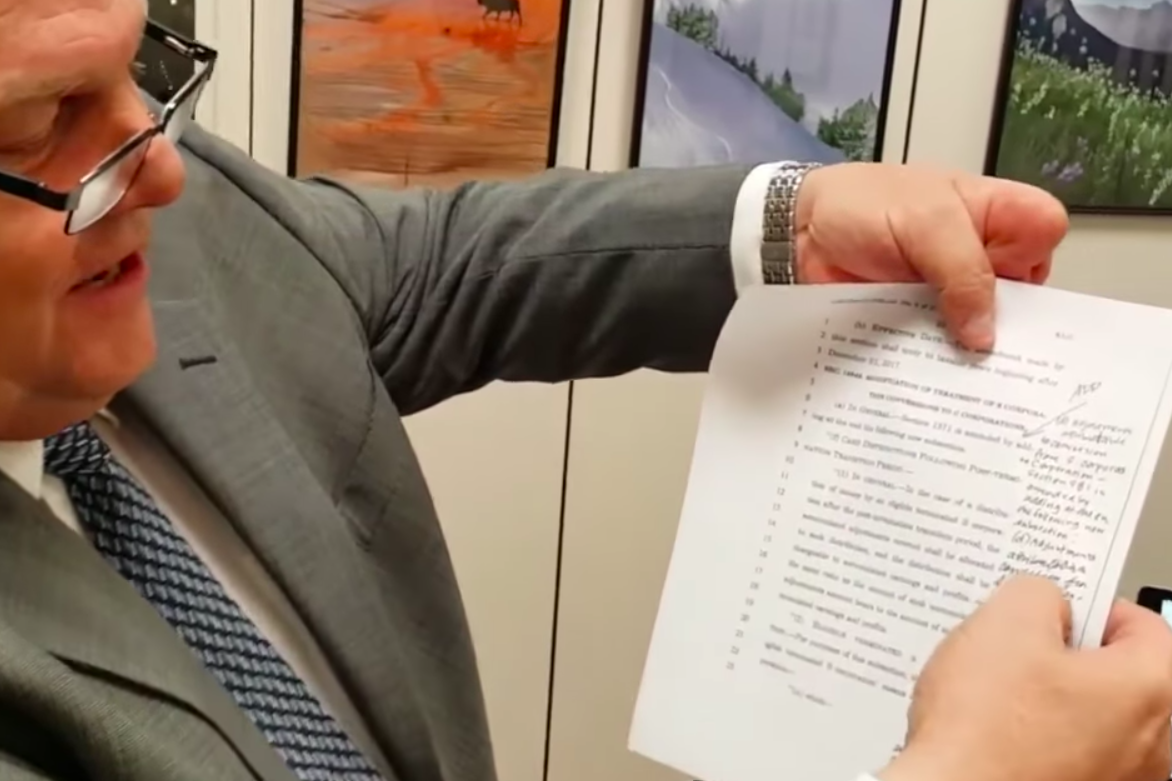 In that great gettin’-up evening, when the Republican Party’s biggest check writers at last got what they thought they’d already paid for, there were a lot of scenes you’re likely to see revisited in political battles across the country next year.

As the most far-reaching legislation, at least since the passage of ObamaCare and maybe longer, neared passage Friday night, a sine die-like mood seems to have swept over that august body, the United States Senate.

It’s a staple of conservative think tanks that government should not be in the business of choosing winners and losers. As the long-awaited hour approached, there was so much choosing going on that K Street lobbyists wrote their wish lists in the margins of the bill and transmitted them directly to the Senate Republican leadership.

The dead of night is not as dead as it used to be. Twitter quickly lit up over language which appeared in the concluding hours giving owners of private planes an exemption for their maintenance and fuel expenses. Rest assured, however: in a bill this massive, passed in this sort of triumphant hurry, the biggest surprises are yet to come, and the choicest outrages will be a long time tumbling out.

“Where I come from, you call somebody up at 2:30 in the morning, you’re up to no good,” Sen. Lindsey Graham said during Bill Clinton’s impeachment trial about the president’s late-night call to Monica Lewinsky. Much the same could be said about tax bills passed in the same hour.

Sen. Charles Grassley of Iowa is known for his Reader’s Digest-ready quotes, and is an outspoken opponent of the inheritance tax, which he believes penalizes the family farmers and small business people he represents, people who put their capital back into their businesses rather than squandering it like some others. According to one study, only 80 family farms and closely held businesses would benefit from the elimination, but for Grassley this is an issue of heartland values.

A quote Grassley gave the Des Moines Register the week before the bill’s passage has become the most widely repeated line of the tax cut rapture.

“I think not having the estate tax recognizes the people that are investing, as opposed to those that are just spending every darn penny they have, whether it’s on booze or women or movies,” Grassley said.

Some have taken him to mean that the rich deserve their money more than the poor, but there is a more Midwestern nuance to it. He said in another interview a couple of months ago that he gets “sick and tired of people that make millions and millions of dollars and probably live high on the hog and spend it and maybe don’t save a penny compared to the family farmer and the small business person that works day and night…”

It’s a little unclear from that fulmination whether Grassley thinks the poor aren’t really poor, a la the welfare queens of the Reagan era, or he’s distinguishing between his deserving, rural rich and a more profligate, urban rich. The most striking sign of social disconnection may be his idea that the underserving go out to movies anymore.

With the end so near in sight, Republicans have renewed confidence they can iron out the differences between the House and Senate versions of the bill and have it done by the end of the year. It may be a little soon to say whether that confidence is entirely justified, but already we are seeing the beginning of a series of seismic shifts in the wake of the Senate’s action in the wee hours of Saturday morning.

Already, with Grassley’s comments and those of Sen. Orrin Hatch about people who “won’t lift a finger and expect the federal government to do everything,” we’re seeing the shift to a new Republican line of attack, shifting responsibility for the now skyrocketing deficit to the cost of the social safety net. We will see that next year as well.

This was also, of course, the day Gen. Michael Flynn formally agreed to a plea deal, making this an even more momentous turning point. With a tax bill passed, would Congressional Republicans feel less beholden to President Trump?

Will the realization of the tax cut be as big a boost to the stock market as the anticipation has been? Most important, will the public, which so far gives this tax cut as low a mark as tax cuts get, like it any better when they find out more about it?