A scene from "Story of Women"

Based solely on body count, a movie about Batman is apparently more dangerous than a movie about abortion.  Not to be flip, but let’s not forget the infamous midnight screening of “The Dark Knight Rises” in Aurora, Colorado, that left 12 dead and 70 wounded.

Still, abortion has always been an inflammatory issue.  More now than ever in these days of a conservative Supreme Court and their recent vote to overturn Roe v. Wade.

Certainly no one will be surprised that most movies (and most movie reviewers) are pro-choice. So, with a few exceptions, the following list is most definitely slanted.  But maybe these films will give you something to think about or talk about or argue about or… 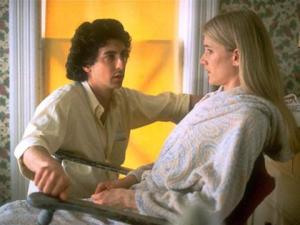 A scene from “Citizen Ruth”

“Citizen Ruth”: See it if only for Laura Dern’s fresh, funny, gutsy performance. She’s a dim-witted glue-sniffer, pregnant for the fifth time (the previous four are in foster homes), who becomes a clueless pawn in the struggle between pro-choice and pro-life advocates. An early effort by Alexander Payne, the movie isn’t as even-handed as it strives to be (the pro-lifers get the short end of the stick). Still, Dern is phenomenal. Her slattern-heroine doesn’t give a rat’s ass for anyone (born or unborn) but herself.  Note the way her eyes light up at the prospect of a new stimulant (patio sealer!).

“Story of Women”: Based on the true story of a back-alley abortionist (Isabelle Huppert) who was executed by the French government in 1943, Claude Chabrol’s film is devastatingly complex and eloquently ambiguous. A pragmatic opportunist for whom abortion is neither a moral dilemma nor a political agenda, Huppert’s small-town housewife (with two kids) begins her kitchen-table career simply as a means to buy a better life for her family. At its core, the movie is less about abortion, perhaps, than the amoral quagmire of Occupied France. Huppert, of course, is beyond brilliant. 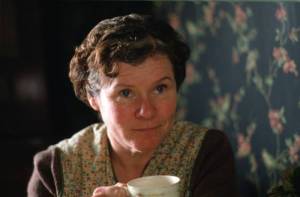 A scene from “Vera Drake”

“Vera Drake”: Crossing the Channel and trading France for England, Mike Leigh’s complicated, compassionate picture is anchored by Imelda Staunton’s tremendous portrayal of a middle-aged cleaning woman in ‘50s London who performs illegal abortions.  She’s motivated by neither money nor morals, but by the belief she’s providing a desperately needed service to desperately needy women. In a way, she’s just, well, tidying up. The movie is not an easy one, but it helps a lot that it opts for warmth and charm over grandstanding and point-making. And if Staunton looks familiar, well, you’ve seen her at both Hogwarts and Downton Abbey.

“Juno”: Our teenage protagonist (Ellen, now Elliot Page) finds herself unexpectedly pregnant and, in a rarity for movies, opts to have the child. That doesn’t mean it’s an easy decision, but the film is more interested in her relationship with the couple (Jennifer Garner and Jason Bateman) who are going to adopt her baby than her personal should-I-or-shouldn’t-I struggle. In its own way, it’s exactly what a pro-choice movie should be. 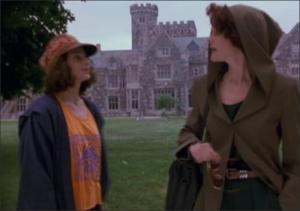 “Rain Without Thunder”: This little-seen indie, made in 1992 and set in 2042, posits a time in the near future when Roe v. Wade has been overturned (hmmmm, only off by 20 years). Women are being sent to prison for attempting to terminate a pregnancy. And the government isn’t kidding around (It’s called the Unborn Child Kidnapping Act). There are pregnancy detectors at airports to stop pregnant women headed to other countries where abortion is still legal. The title comes from a speech by Frederick Douglass and the cast includes Jeff Daniels, Betty Buckley, Steve Zahn and Linda Hunt.

“Borat Subsequent Moviefilm: Delivery of Prodigious Bribe to American Regime for Make Benefit Once Glorious Nation of Kazkhstan”: Oh, yes, it’s got everything from a Mike Pence rally to a Rudy Giuliani, um, interview. But one of the stops in Sacha Baron Cohen’s hilarious American odyssey includes a visit to a pro-life Women’s Health Center, posing as an abortion clinic. Borat’s teenage daughter, Tutar (Maria Bakalova, brilliant), has accidentally swallowed a tiny plastic doll that was on a cupcake her father gave her. What ensues is a chaotic confrontation between an apologetic Borat (‘Yes, I put it in her”) and an appalled pastor. Phew….