Mandy Mahoney (rear, right) and son Paul are joined by Nichole and Ferris Vickers during Mahoney’s 2021 campaign to serve District 5 on the Atlanta City Council. (Photo by Mandy4Atl)

The South has long been defined by its heat and humidity, so much so that bragging about the heat has even become something of a punch line in certain circles. Yet heat will be perhaps the most significant threat to the health and well-being of Southern communities in the coming decades. As the global climate warms, extreme heat is growing more common in the South, and that is putting low-income people and communities of color at the highest risk of heat-related illness and even death. 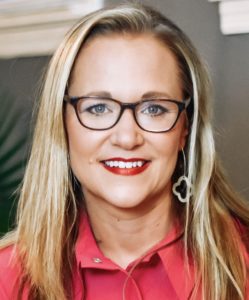 Since my days as the City of Atlanta’s first sustainability director, I have been dedicated to helping our community face climate change. Last year, I ran for Atlanta’s District 5 City Council seat on a climate-change platform. I was motivated to run by wanting to address the underlying drivers of our biggest challenges that are also climate change problems. The No. 1 item on that list for me: affordable housing.

I knocked on doors six days a week from July through the runoff in early December. It gave me the opportunity to hear what was in the hearts of our community. Atlantans want real solutions to affordable housing, helping seniors age in place, public safety and climate change.

Yes, the majority of people I met wanted to talk about climate change. They expressed feelings of fear, uncertainty and the inability to do anything to address it. They know climate change is real, causing harm to our world and threatening the future of their children and grandchildren. They were curious as to how climate change is going to impact their specific neighborhood and our city. They also felt that we cannot do anything at the local level, but that rather this is an issue that “they” have to address in Washington.

These feelings and questions opened the door to exploring how climate change is real in their lives today. We intuitively know the climate is changing around us. Residents are aware that the summers feel hotter, more humid and longer and that major storms are more frequent and severe. They experience their streets, parks, and yards being flooded more often. Even residents who live in modern, more energy-efficient housing know that they are having to run their air conditioning longer and their energy bills are higher. And residents who live in older homes in need of some TLC know that air leaks are causing cooled air to escape and humidity to get in. It can be a miserable experience to be at home on a hot day when the window AC unit simply cannot keep up. More rain and humidity bring another risk to these households: mold and mildew, which can cause asthma and other illnesses.

We have failed to face the reason for the substandard level of existing affordable housing: Historic racist policy, namely the segregation of neighborhoods through redlining and other racist housing policies in the late 19th and 20th centuries. Today, residents of formerly redlined areas are more likely to face higher temperatures in their neighborhoods relative to other areas of a city. Segregated neighborhoods often had limited access to green space and were more likely to have concentrations of roadways and large buildings, which tend to radiate heat and prevent neighborhoods from cooling during the evening.

The result is that the legacies of segregation are still evident in the uneven exposure to heat faced by urban residents throughout the nation. According to a recent study, neighborhoods that have been historically redlined are on average 5 degrees warmer than other neighborhoods, though in periods of extreme heat the temperature disparity can be as high as 20 degrees. The biggest temperature swings were in Southern and Midwestern cities.

Atlanta is a case in point. The city’s former redlined neighborhoods are on average 9 degrees hotter than other neighborhoods, placing residents at an elevated risk for heat-related illnesses and even death during periods of extreme heat.

The redlined neighborhoods of the past are the gentrifying neighborhoods of today. East Lake, Edgewood, Kirkwood, Reynoldstown – all places where I knocked on doors during my campaign – are clear evidence of that. I talked with many African American families who have lived in their homes for decades. They want to remain in the neighborhoods they love deeply. Yet too often their homes are crumbling around them and they do not have the resources for repair and maintenance. As climate change worsens, their houses may become unlivable. It’s the last straw that forces them to sell to one of the dozens of unsolicited calls a week they get from flippers looking to buy their house for a song.

But there is also hope in this story: Funding and resources exist to upgrade homes. A few examples include the U.S. Department of Energy’s Weatherization Assistance Program, the City of Atlanta’s Care and Conserve Program, and Georgia Power’s Home Energy Efficiency Assistance Program. Local grassroots organizations like Neighborhood in Need make emergency repairs for seniors. Additional federal funding will also be available this year through the American Recovery Act and the Infrastructure Investment and Jobs Act.

The bad news is that the need far outweighs the resources available through these programs. On the face of it, it seems that it is a simple problem of the demand outstripping the supply of funds. That is not the full story. We have a basic business problem: These programs are not coordinated, and many of them make it very difficult for residents to access their resources. We are wasting a tremendous amount of funding on the wrong thing, the intake and application process, rather than on investing directly in home upgrades. Additionally, Atlanta is leaving money on the table because many of the government programs are poorly run.

This is a solvable problem. But it requires the political will of Mayor Andre Dickens to lift up the preservation of existing affordable housing as a priority. He can convene the agencies and organizations that work on these issues and call them to work together effectively. We need to create a simple and shared application process among service providers and require programs to collaborate to leverage their funding. If we do that, we will create a win-win-win: Tax dollars will be used effectively, we will maintain affordable housing stock, and we will address the warming climate.

Atlanta’s summers are hot, and they’re going to stay that way, regardless of the impact of climate change. But with a comprehensive approach like the one I’ve described here, the burden of that summer heat doesn’t have to fall on the people who can least afford it.

Author’s note: A special thank you to William D. Bryan, PhD, director of research for the Southeast Energy Efficiency Alliance, for his thought leadership and research on the issues discussed here.