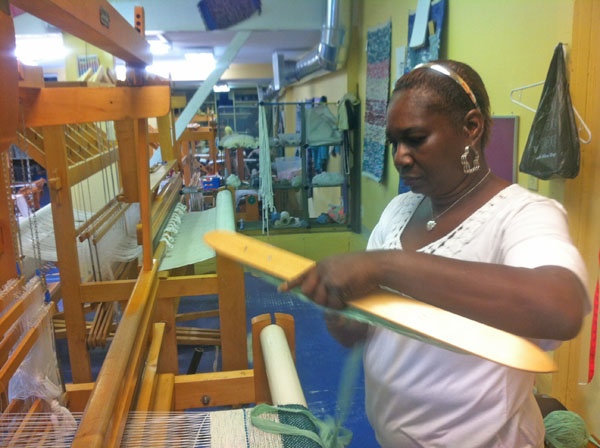 When Fred Brown’s ex-girlfriend went to prison in 2011 and left their son in his care, he knew he had to change the pattern of his life. 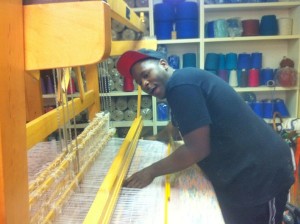 Fred Brown, 29, weaves a rug at re:loom. First the warp fibers are set up taut on the loom, then Brown interlaces the weft fibers to create the rug. Two years ago Brown was living in an abandoned building with his infant son. Now he has an apartment, a job at re:loom and daycare for his 3-year-old.

Brown was homeless and surviving in “The Bluff,” a high crime area in west Atlanta. He didn’t want Damari, then only 9 months old, to grow up like he did—seeing his first dead body on the street at six years old and getting so used to the sight that it “was no big deal” by the time he was an adult. Brown didn’t want to have to pack a pistol when he took Damari to the grocery store or park.

Last week, Brown told his story from the headquarters of re:loom, where he turns recycled clothing and textiles into rugs and other items. re:loom is nonprofit that helped him find his way back by teaching him the ancient art of weaving, interlacing weft threads over warp. Brown and his co-workers recently got a big boost when another grassroots Atlanta business—Spanx—began globally promoting re:loom.

One million Spanx catalogs went out late last month with the news that re:loom had won a Leg Up Award, and the re:loom web store (which has no marketing budget) was flooded with more than 1000 views (up from a typical two dozen a week) and sales doubled.

“My big break came when Oprah named Spanx a ‘Favorite Thing’,” said Spanx founder Sara Blakely said of her product that uplifts and unjiggles the backsides of women all over the world. “At Spanx, we love women supporting women, and that’s what these [Leg Up winners] are all about.”

The woman at re:loom is founder Lisa Wise, who as executive director of Initiative for Affordable Housing (IAH) had long pondered how to break the cycle of poverty. One small aspect of that solution was providing work for the low-income person to practice, over and over, a stable life. Weaving offered repetition, structure and a destination for the endless supply of surplus clothes donated to IAH. 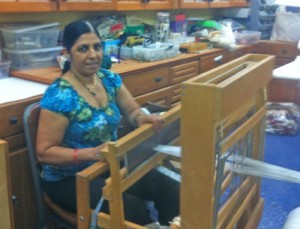 Dibya Khanal, one of three re:loom workers from Nepal, weaves straps for purses.

“re:loom is about people changing,” Wise says. “We make attractive, sturdy, machine washable items, and for our customers, the weavers’ story often seals the deal… That’s why our tagline is, ‘Weaving a better life.’ ”

Donna Scott, 41, came to re:loom from a domestic violence shelter, her refuge from an abusive relationship with her ex-boyfriend. Leila Wright, 52, had been in and out of homeless shelters for several years. Robin Upshur, a former banker, had been laid off from her job and lost her home. Damber Pulami, 43, and Dibya Khamal, 43, from Nepal, were looking for a new life. (More on their stories here).

Out of looms the size of small upright pianos, they weave, rugs, purses, pocketbooks, hammocks, placemats, among other products, out of donated materials ranging from T-shirts to old dresses to plastic bags.

“This work is enlightening,” Scott said. “I didn’t think I could do anything like this. It feels great to know that I made something that people are going to wear and have and use in their homes.” 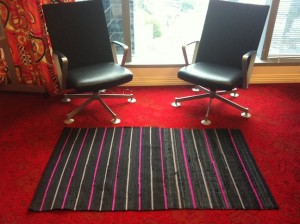 The weavers at re:Loom made this rug out of material discarded by Spanx, the Atlanta-based maker of body-shaping undergarments. Spanx leaders were impressed with the recycled, practical, and modern design by re:Loom weavers, who had learned this ancient skill as a way to return to the job market. Re:loom, which is based in Scottdale, is a featured nonprofit in the most recent Spanx catalog, and its one of a kind goods are selling well online.“It’s inspiring to see how art and need were woven together into a business that is changing lives,” Spanx founder Sara Blakely said. (Photo: Spanx).

Wise set up re:loom’s “weave house” in Scottdale through a grant from the Department of Health and Human Services. Re:loom’s focus on sustainability attracted Delta Airlines, for once. “They gave us safety vests worn on the tarmac, and we made lanyards and passport holders out of them for employee gifts,” Wise said. “You can see the reflective strips in it.”

Special commissions connected re:loom to personal stories. Weavers made a a rug out of work uniforms from a man who had recently retired, and a table runner out of a blouse and other clothing worn by a beloved parent.

The connection with Spanx began with a chance meeting at an eco-friendly festival at a Buckhead church. To help tell the story of the weavers, Wise set up her festival booth with a little loom.

“People really don’t know that this is the way most of our clothes come about,” she notes. “All fabric is woven on some type of loom.”

Her demo attracted a Spanx employee, who mentioned that the company’s office near Lenox had leftover fabric. Re:loom volunteers followed up, and the box of remnants stood out from typical salvage.

“It feels very flexible and malleable, and it moved really well,” Wise said. “We made a scarf and rug, and sent it up to them with a thank you and encouragement to keep sending extra fabric.”

A Spanx contact suggested Re:loom apply for the Leg Up award. “It’s inspiring to see how art and need were woven together into a business that is changing lives,” Blakely said about honoring re:loom. “I love shopping with a purpose.” 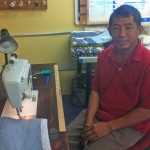 Damber Pulami, originally from Nepal, wove the re:loom rug and scarf from Spanx remnants. Spanx is helping market re:loom’s handcrafted items, such as hammocks and more.

At re:loom, weavers who once lived on the edge now move their loom shuttles from edge to edge, creating one-of-a-kind handcrafts. The work has stabilized them. Wright said she spends weekends working with Hosea Feed the Hungry ministry. ”I want to give back,” she said.

For Fred Brown, who dropped out of public school, this work is his first real job, and it separates him from the harsh neighborhood of his youth.

“Over there they can’t buy groceries. They’re using T-shirts for Pampers,” he said. He recalled the helplessness he felt when his son “was looking up at me crying for Similac and I’ve got nothing for him.” Sometimes the pair found shelter in abandoned buildings.

“I did what I could to take care of my son, if you get my drift,” Brown said.

Now he wants to get his GED. As every swing of his loom makes a gentle hammering sound, Brown makes this promise about his old life: “I ain’t ever going back.”

Previous Article
Celebrating 20 years in town, CARE seeking to raise profile in Atlanta
Next Article
Why Enlisting a Realtor’s Assistance is Still A Necessity for Buyers