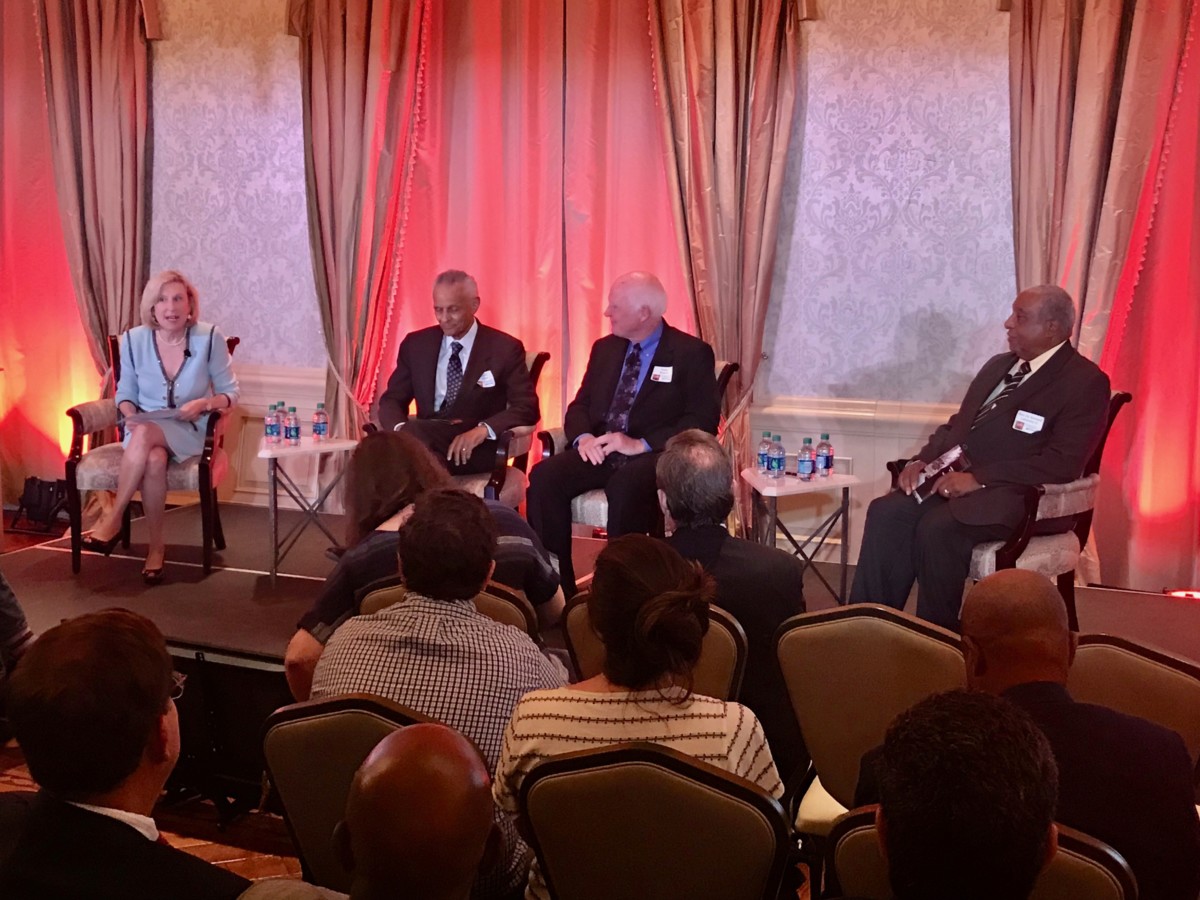 Sometimes we take for granted Atlanta’s living history as the home of civil rights.

That was reinforced to me on the evening of Wednesday, Sept. 5 when the Arthur M. Blank Family Foundation hosted a program featuring the documentary – King in the Wilderness – on the last three years of Martin Luther King Jr.’s life. 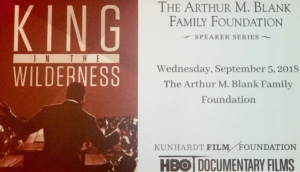 “King in the Wilderness” documentary and panel discussion at the Arthur M. Blank Family Foundation (Photo by Maria Saporta)

The documentary was co-produced by HBO and the Kunhardt Film Foundation.

On the panel were two civil rights icons – C.T. Vivian and Bernard Lafayette – leaders who worked alongside King and who are living in our midst. King biographer Taylor Branch also spoke.

But unlike most documentaries where hours of interviews are rarely seen by the public, the “King in the Wilderness” interviews are being made available to high schools and universities for educational purposes as well as to the public at large thanks to a partnership between the Kunhardt Film Foundation and the Blank Foundation

Peter Kunhardt, director of the Kunhardt Foundation, said that less than 5 percent of the interviews and research made it into the documentary. There now will be more than “39 hours of personal memories” in the interviews it had with 19 people that will be available digitally to public at large.

The Blank Foundation provided $50,000 to the Kurnhardt Foundation tocreate a free public archive of the interviews as well as to design the curriculum, that focuses on several issues – such as the movement’s struggle with adopting and keeping a commitment to nonviolence. 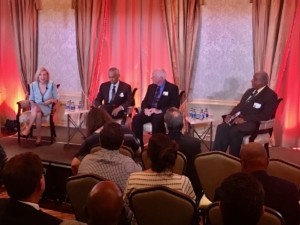 After seeing the documentary at the Sundance Film Festival, the Blank Foundation’s John Bare connected Kunhardt with Blueshift, a media educational group founded in 2015, to link documentaries with educational offerings.

The official website for the educational initiative was launched in Atlanta because of King’s ties to the city as well as the Blank Foundation. The Atlanta Public Schools is the first school district to incorporate the documentary and the additional research into its curriculum.

Again, we in Atlanta often don’t appreciate the special place we have in the history of the Civil Rights Movement. It often takes people from outside our city to remind us about our unique historical role.

Listening to the stories of C.T. Vivian and Bernard Lafayette last week helped bring King back to life – and the discussion answered a question that has haunted me for more than 50 years.

Vivian opened it up by saying King “was really a person like very few others.”

As Lafayette described him, King was often broke because on his walks to work or to church, he would give his money away to whoever asked for cash. 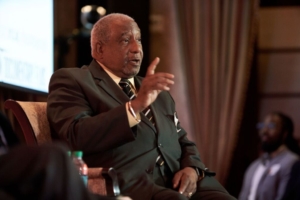 And King was unusual in the way he related to situations.

“One time he was in the office, and MLK came into the board room, and he stepped on one of the chair legs, and he said: ‘Excuse me,’” Lafayette recalled laughing about King apologizing to a chair leg.

Both Vivian and Lafayette said King understood the gravity of their work.

“We were bringing forth a new society,” Vivian said. “That’s what kept us going so we didn’t care about dying. We knew that what we were about was more important than the piddling thing we call life. Daily we were thinking about how we can change the world.”

Lafayette put it into context saying that King was only in the movement for 12 years until he was assassinated on April 4, 1968.

“He was surprised he lived as long as he did,” Lafayette said. “When he saw the Kennedy assassination, he said that’s what is going to happen to me.”

But my interest was piqued when Lafayette said King had made Ebenezer Baptist Church a sanctuary for those refusing to go to the military. 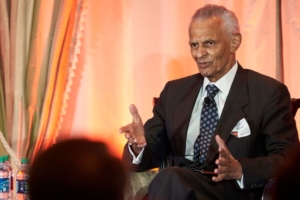 C.T. Vivian during the panel discussion on “King in the Wilderness” (Special: Hales Photo)

As I have written several times before, I had the most amazing period of my life when I was 11 and 12 years old. The eldest daughter of MLK and Coretta Scott King – Yolanda – became my best friend.

I was lucky enough to spend Saturday nights at her home and go with the family to church Sunday morning to hear her father speak. I was totally mesmerized by King and his messages.

One Sunday, I was sitting up in the balcony with Yolanda, and King delivered a powerful sermon against the war in Vietnam. My parents, my sister and I already were already against the war, but King sealed my beliefs.

At the end of the sermon, King asked anyone with a draft card to come tear it up in front of the congregation. For a minute or so, King waited for someone to tear up his draft card. But no one did.

I remembered wishing at the time that I had a draft card I could tear up to show how moved I had been by his sermon.

Because the war was so controversial (this had to have been in May, 1967) during those days and because King asking people to tear up their draft cards was so bold, I began to question my own memory of that sermon. 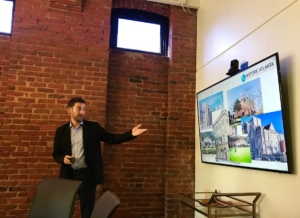 Over the years, I’ve asked people whether that had really happened, and I never could find the answer.

After the panel discussion, I went to Lafayette to ask whether King had actually asked young men to tear up their draft cards.

Lafayette, who was not at that sermon, confirmed that he knew King supported “tearing up draft cards and making the church a sanctuary after the speech he made in New York” in April, 1967 – exactly one year before he was killed.

That period of history was so rich and world changing that we owe it to Atlanta to preserve it – through oral histories and documentaries.

But more importantly, we owe it to our city and our nation to preserve the physical places where that history was made – places like the original Paschal’s Motor Lodge, Gaines Hall, the beautiful Atlanta Life headquarters on Auburn Avenue and so many places.

Once it’s gone, we’ll never get it back. 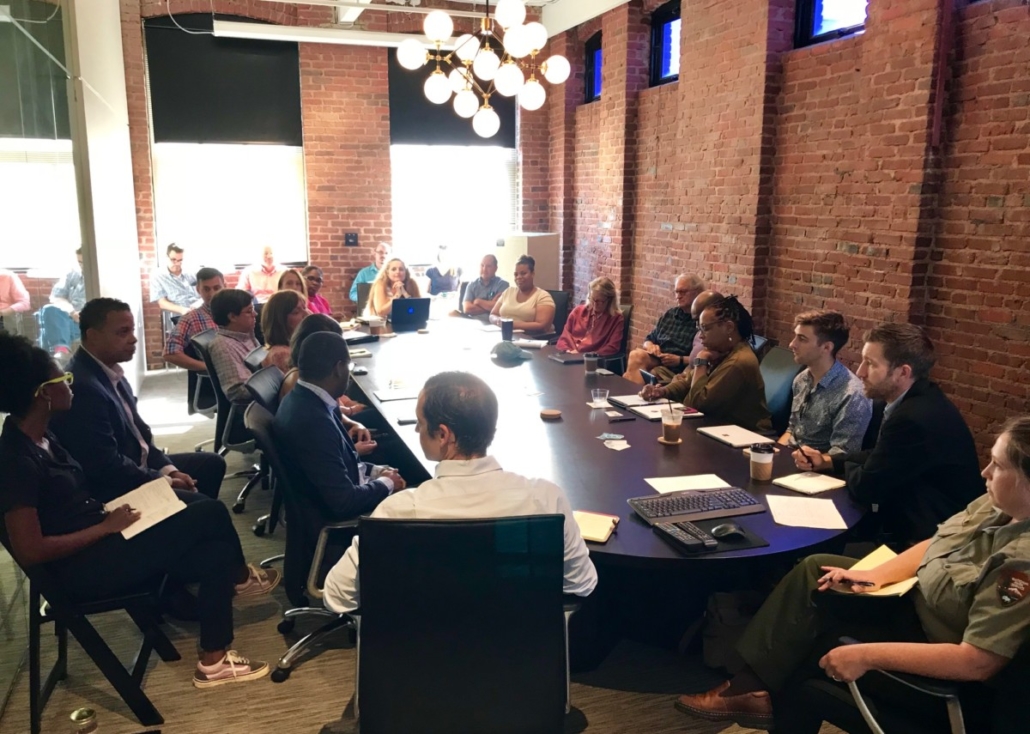 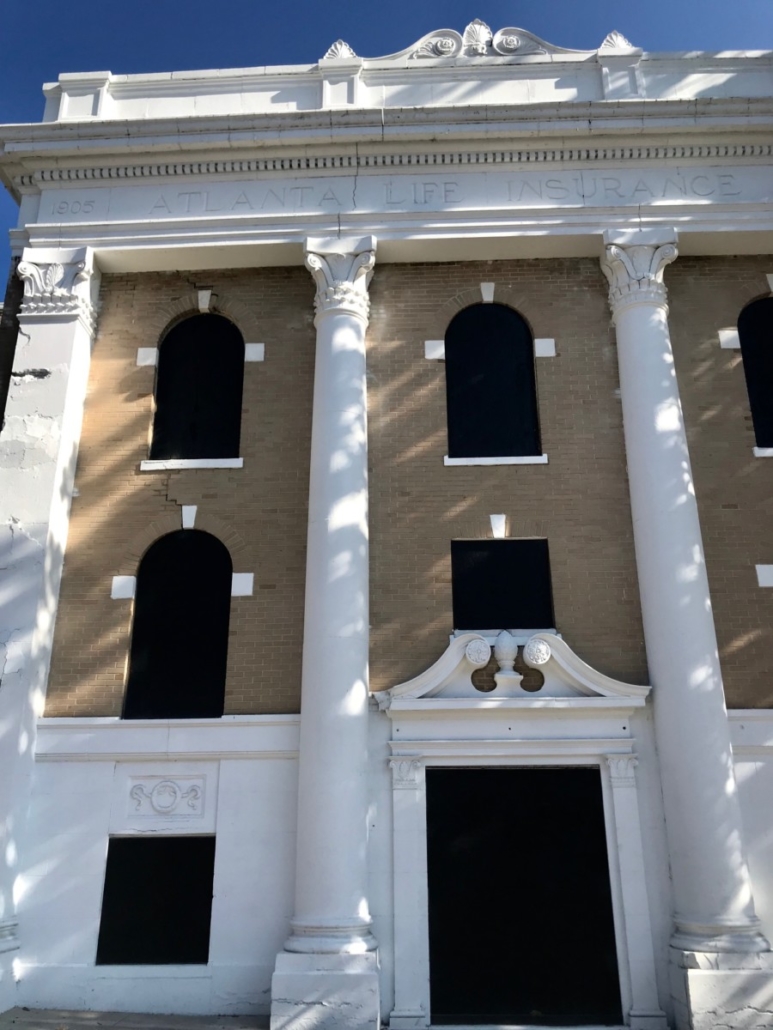