By Guest Columnist MARK ALDREN, a member of the team that launched CNN and past president/board member, Atlanta Press Club

Skeptics, and there were plenty of them at the time, called it the “Chicken Noodle Network.” But 40 years ago, Atlanta was the birthplace of a revolution in news reporting. On June 1st, 1980, Ted Turner launched the Cable News Network, CNN. It was a bold experiment no one had dared try before – 24- hour news, seven days a week, beamed skyward to orbiting satellites. 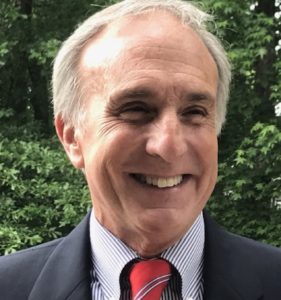 That Sunday afternoon, I was part of the team working as part of Day One, Shift One in the basement newsroom at CNN headquarters on Techwood Drive. Top to bottom, there were only a total of 243 people in the entire network. Finishing touches on construction to the Techwood newsroom continued right up until the premier.

To me, that facility seemed modern and luxurious compared to where CNN had started just a few months back – a creaky old house on West Peachtree Street that many of us had laughingly called the haunted house. Outside at Techwood, seven satellite dishes pointed skyward, creating a scene only akin to something that I had observed in Buck Rogers comic books. It was enough to make my heart beat faster every time I pulled into the employee parking lot.

Of course, we had our share of last minute problems and glitches. Among them: Our computer system crashed too many times during weeks of rehearsals, so just days before launch we deemed it unreliable for on-air use and went back to typewriters and carbon copies for newscast scripts. Camera gear was stolen from the Los Angeles bureau, forcing that team to scramble for replacements. 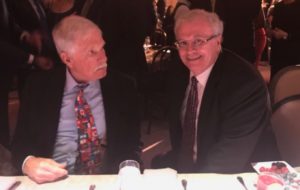 Ted Turner (left) sits at a celebration of his 80th birthday with Tom Johnson, who served as CNN’s president in the 1990s. Credit: Maria Saporta

Ted Turner confidently declared CNN was signing on and would not be signing off until the end of the world. Critics thought Ted would quickly lose both money and interest. Who would watch 24 hours of news? And how would we fill all that time? Would the Big Three networks muscle little CNN out of major events? But the critics didn’t know Ted. Nor did they know the dedication of the team he had assembled.

It was never about money. Turner could have easily invested in far less risky pursuits. And most of the people working there could have placed themselves in more stable environments making bigger paychecks. Ted Turner wanted to change the world. His team relished the challenge. And we knew that, succeed or fail, we were making history.

Over the past four decades, a lot has happened. CNN has undergone a number of ownership and management changes.

But back in 1980, on the day he dedicated the Cable News Network, he shared a vision. Ted Turner said he hoped that, “CNN’s international coverage and greater-depth coverage will bring, both in the country and in the world, a better understanding of how people from different nations live and work and, hopefully, bring together in brotherhood and kindness and friendship and in peace, the people of this nation and this world.”

And who wouldn’t want to be a part of that?

Note to readers: After serving on the team that successfully launched CNN, Mark Aldren went on to work with the local Atlanta news departments of WXIA-TV and WGNX-TV. Aldren returned to CNN International in 2008, and served there 11 years there as a senior copy editor before accepting a buyout from AT&T in the summer of 2019. Aldren is a past president and current board member of the Atlanta Press Club. 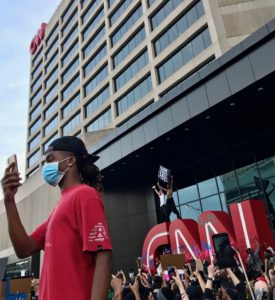 The CNN sign in Downtown Atlanta was a central image for selfies and photos taken during the May 29 events to mark the death of George Floyd, who died when held down by police officers in Minneapolis, and other African Americans who died in incidents with police. Credit: Kelly Jordan 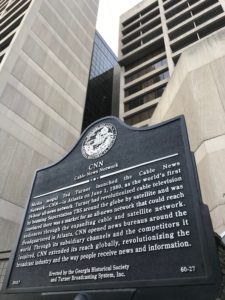 CNN’s role in setting the bar for the global news industry is recognized in a marker established by the Georgia Historical Society and Turner Broadcasting System. Credit: Kelly Jordan 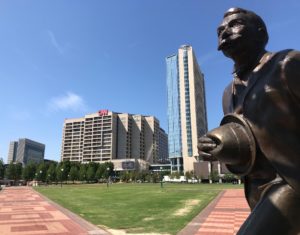 The CNN brand is central to views of Centennial Olympic Park, established for the 1996 Summer Olympic Games and still a central gathering spot for regional events. Credit: Kelly Jordan 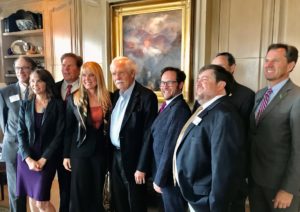 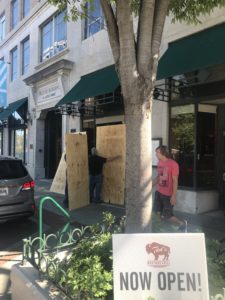 Worker replace broken glass on Saturday morning at Ted’s Montana Grill and the Turner building, the base of Ted Turner’s current enterprises (Photo by Maria Saporta)