The basin of the Chattahoochee River is threatened by stormwater runoff that carries hazardous materials from industrial sites into the water system, a new report shows. 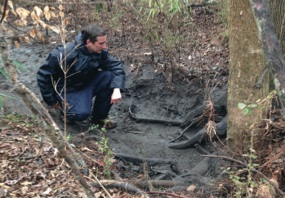 Tributaries of the Chattahoochee River are tainted by hazardous materials that flow in stormwater from industrial sites. Credit: 2014 Georgia’s Dirty Dozen

This situation prompted the Georgia Water Coalition to include the Chattahoochee River in its 2014 edition of Georgia’s Dirty Dozen, a list of water pollution problems across the state that was released Wednesday. The Chattahoochee has made the list since the first edition, in 2011.

The release of Georgia’s Dirty Dozen also served as a changing of the guard for the Chattahoochee Riverkeeper. Sally Bethea, founding executive director, monitored a conference call to discuss the report. But it was Jason Ulseth, the incoming riverkeeper, who fielded questions from reporters.

“We need more funding and staffing to inspect facilities and provide assistance … on how to comply with clean water laws and prevent pollution from entering our waterways,” Ulseth said. “A lot of companies want to do what’s right.”

The problem is that the companies don’t have proper safeguards in place, and the state has only two employees assigned to manage the state’s approximately 2,700 industrial sites, according to the report.

Bethea said after the conference call that the Chattahoochee basin has about 500 industrial sites that do not comply with clean water laws. Half of them are in metro Atlanta, she said.

The cover of 2014 Georgia’s Dirty Dozen shows the location of the problem areas identified in this year’s report. Credit: Georgia Water Coalition

The following is a list of the types of industrial facilities that Georgia Water Coalition’s report says can be problematic:

Georgia Water Coalition produces the report to showcase what it views as the consequences of poor stewardship of water resources. The list is not intended as a ranking of worst offenders, or even as a list of worst offenders.

“It’s a list of problems that exemplify the results of inadequate funding for Georgia’s Environmental Protection Division, a lack of political will to enforce existing environmental protections, and ultimately misguided water planning and spending priorities that flow from the very top of Georgia’s leadership,” Joe Cook, of the Coosa River Basin Initiative, said in a statement.

“No matter what lens you look at this through, you see failures of state policies that affect almost every watershed,” said Gordon Rogers, riverkeeper and executive director of Flint Riverkeeper.

The coalition also opposes the state’s refusal to enforce an existing 25-foot buffer intended to protect coastal wetlands. A lower court has ordered the state to enforce the buffer and the state has appealed that ruling. Oral arguments are scheduled in January in Georgia’s Supreme Court.

However, the coalition is prohibited from taking any political positions without the risk of losing its status as a non-profit organization. The coalition says it includes 217 organizations with an interest in environmental issues that have a total membership of more than 300,000 Georgians.

More information about the following entries in 2014 Georgia’s Dirty Dozen are available from Georgia Water Coalition:

Previous Article
Dreams of jobs training hit reality; Atlanta vows it won’t surrender
Next Article
Proposed annexation by Brookhaven fuels push back from cities not even formed – Lakeside and Briarcliff