A handful of recent economic-types of reports portray metro Atlanta and Georgia as continuing a slow recovery from the depth of the recession. 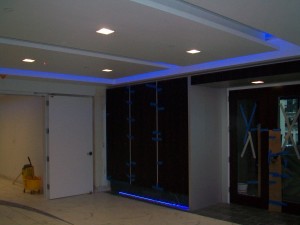 Commercial construction activity has continued to improve in 2013, according to the Federal Reserve Bank of Atlanta. This medical office building was under construction in Buckhead, near Piedmont Hospital. Credit: David Pendered

The news offers little hope for the type of immediate turn-around that’s needed by folks who post blogs saying they’ve been out of work for more than six months and aren’t getting call-backs to their job inquiries.  But most signs do point toward a rising tide that eventually will reach most boats.

A new report from the Metro Atlanta Chamber showed job postings in high tech and a few other fields grew faster in this region than nationally. The Federal Reserve’s report for the first quarter indicates a slow recovery in Georgia that’s broad-based. A Georgia State report in May predicts continuing headwinds from the sluggish global economy, with 2014 expected to be a better year for the economy.

The chamber tries to generate some enthusiasm by looking at the growth figures in its workforce trends report. The chamber’s Workforce Council retained Burning Glass International, a Boston-based labor data company, to review “all advertised job openings in key strategic industries from May 2012 to May 2013 in the 28-county metro Atlanta statistical area,” according to the chamber’s statement about the report. 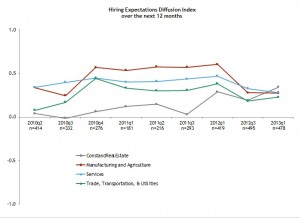 The rate of hiring in metro Atlanta is forecast to continue a trend of slow growth, according to this hiring index. Credit: Federal Reserve Bank of Atlanta.

“The increase demonstrates that metro Atlanta continues to be a thriving hub for business, especially in key industry sectors,” chamber President Sam Williams said in the statement.

The report on the number of job postings shows:

On the other hand, Georgia State’s report predicts job creation will cool in 2013. 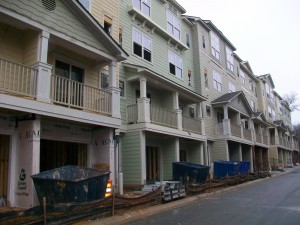 Residential sales are on the upswing but remain uneven across metro Atlanta, according to the Federal Reserve Bank of Atlanta. This development is aimed at pending demand in Buckhead. Credit: David Pendered

Georgia created 68,400 new jobs in 2012, which signifies an economic recovery, according to Rajeev Dhawan, director of Georgia State’s Economic Forecasting Center. However, Dhawan predicts fewer jobs will be created this year – just 63,300 jobs – with the greatest downturn to come in hospitality, retail, manufacturing and transportation sectors.

Other dreary indicators cited by Dhawan include the 3 percent decline in international revenues reported by Delta Air Lines on April 24, for the most recent quarter. The state’s export growth dropped to 3.2 percent in 2012, down from 20.1 percent in 2011, and hasn’t regained steam this year, according to Dhawan’s report.

The Federal Reserve Bank of Atlanta reports that business conditions in its southeast district continued the modest improvements recorded earlier this year. In the June 5 Beige Book, for the second quarter of the year, the Atlanta district reports that, “The outlook for most sectors remained positive as contacts anticipate further improvement in activity for the remainder of the year.”

Highlights from the report include: