No one thought they could do it.

Reaching concensus on a plan to build roads and transit across 10 counties in metro Atlanta was just too tough a task.

In the end, a retired Georgia Tech band director got 21 elected officials to play the same song. The region now has a 10-year plan to spend $6.14 billion to improve mobility. Voters next year will decide its fate.

That retired band director is Bucky Johnson, who served as chairman of the Atlanta Regional Transportation Roundtable. Norcross voters elected him mayor in 2008.

For 19 years, Johnson led the Georgia Tech Yellow Jacket Marching Band. He retired in 2001 to spend time with his family and leave his band post on a high note, according to a flattering story that appears in RamblinWreck.com.

Johnson’s professional background never was mentioned during the roundtable meetings. But it was evident in the way he guided the members to find common ground.

“Both issues are about people,” Johnson said of managing student musicians and elected officials. “About working with people and getting them to work together collaboratively.

“Obviously, there’s a certain rhythm with both organizations,” Johnson said. “You don’t want to move things any faster or slower than everybody can move together.”

In his own words: Bucky Johnson compares tasks of band director and chairmanship, and suggests a mascot. Credit: David Pendered

That attitude appeared in Johnson’s sudden calls for time out. When tempers flared, he simply used his prerogative as chair to send everyone for a coffee or bathroom break, or use the time to talk privately with an adversary.

Johnson wasn’t really supposed to chair the group. And one of the few allusions to how he got it barely touched the surface.

“I remember how you got the job as chair,” Decatur Mayor Bill Floyd said at the final roundtable meeting. “It was probably one of the best decisions we’ve made. You’ve done a wonderful job, an outstanding job. You have held this group together a lot of times when I gave up on it.”

Johnson took the gavel in January when he stepped down from the powerful Executive Committee to make way for Atlanta Mayor Kasim Reed. The roundtable had not voted Reed onto the five-person Executive Committee and – in a deal brokered at the state Capitol by House Speaker David Ralston – Reed was added in exchange for the resignation of one of the five members.

Johnson volunteered to step down and to serve as the non-voting chair. The position wielded great influence because the chair called meetings, set the agenda, and determined who could speak, and when.

Reed commended Johnson at the final meeting, on Oct. 13. Reed outlined the amount of work that Johnson oversaw.

“Twenty-one members with a vast array of backgrounds trimmed a list from $23 billion to $6.14 – and passed it unanimously,” Reed said. “We have proven that the [region’s] leaders are willing to work on a problem that we agreed needed work.”

Afterward, Johnson said the tasks of directing a band and chairing a meeting are more alike than not.

“It’s about understanding what people want, what your students want to play and what your crowd wants to hear,” Johnson said.

“What’s happening here [at the roundtable] is we’ve got the projects that local elected officials feel will move the needle and get us moving forward, but we also have what the constituents want and need to get to where they need to go.”

It’s also about respect for self and others.

“When I first went to Tech, it was a party band,” Johnson said. “I said [to them] that in order for people to be attracted to this group and sustain in this group, we need excellence. People are drawn to excellence. You can still party on, but you have to be proud of the product.

“It’s really about creating relations,” he said. “It’s about building community and a culture.”

That sentiment resembles comments made by Douglas County Chairman Tom Worthan in his final remarks.

“We listened to each other,” Worthan said. “I found out that even the larger cities, the inner-city counties, the outer-city counties – we just need to sit down and work together to solve our problems. And we’ve shown that we can do just that.

“It can only be good for the Atlanta region,” Worthan said.

By now, Johnson was getting ready to leave the roundtable’s public arena. It was approaching noon, time to join the rest of the roundtable members in a private celebratory lunch. Johnson had arrived an hour early from Norcross for the 9 a.m. meeting in Downtown Atlanta.

Johnson took a moment to share one last thought. He feels good about the chances that voters will approve a 1 percent sales tax to pay for the project list. Folks who live here, like the elected officials who serve them, seem to be about ready for what he called, “something like this.”

“Timing in music and timing in public life. There are a lot of similarities.” 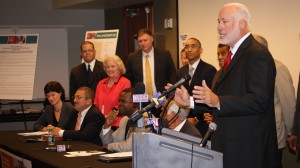