Atlanta Mayor Kasim Reed, the Atlanta City Council, and a host of Atlanta’s past leaders today celebrated Marvin Arrington, who served 16 years as council president and is retiring as a judge of Fulton County Superior Court.

“Indeed, you have made your mark,” Reed said. “Thank you, judge…. Please, carry this man in your heart, and when you see him around the city, tip your hat and say, ‘Thank you.’ God bless you, judge.”

Councilperson Michael Julian Bond presided over the ceremony. Both Bond and Arrington were 27 years old when they were first elected, at age 27 years. 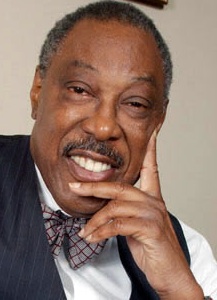 Arrington stood beside the podium as a line of local dignitaries commended him. His hand often lingered on the polished wooden podium he had stood behind for so many years.

“There is no word in Webster’s that could address my profound appreciation,” Arrington said. “Atlanta is one of the country’s greatest cities. Having served this city makes me feel so good about what we’ve accomplished and where we are going.”

Arrington spoke just a few minutes during his opening remarks. He recalled that there were signs for “white” and “black” water signs in City Hall when he was first elected to Atlanta’s Board of Aldermen, in 1969.

Looking into the future, Arrington said he is concerned about the crime rate, the divisive political atmosphere, and the education of young people:

“We have to make sure we have a foundation, in terms of where we are going,” Arrington said.

“Thank you, Dad, for all your years of service and leading me in the right direction.”

Arrington’s response to his son reminded the audience that he remains quick with a quip:

“Somebody said, ‘That boy looks just like you.’ I said, ‘That’s a damn good thing.’”