Rev. Dan Matthews was on phone as his father described 9/11 tragedy outside his window 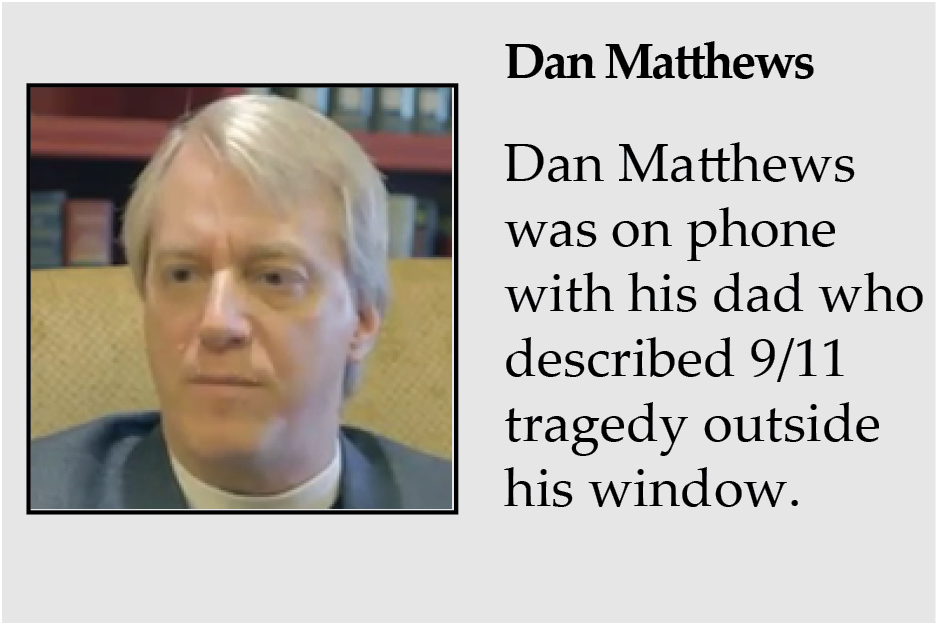 On September 11, 2001, Dan Matthews was reading in his office when the phone rang, disturbing his quiet time. The current rector of downtown Atlanta’s St. Luke’s Episcopal Church was then leading a congregation in Kingsport, Tenn.

It had been a rushed morning as Dan woke up his five-year-old daughter and his 11-year-old son, got them dressed, fed and delivered to school while his wife was on a business trip. He arrived at his office around 8:30 a.m., giving him a much-anticipated time of peace and quiet during the half hour before anyone else arrived at the office at 9:00 a.m.

When he picked up the phone, he heard the shaken and uncertain voice of his characteristically calm and collected father.

“Danny, I’m not sure what just happened,” his father said.

Dan’s father was rector of Trinity Church in New York’s Wall Street district. His office was on the 24th floor of a building behind the church, a mere stone’s throw from the Twin Towers of the World Trade Center.

“We were sitting in this meeting and suddenly we heard this whistling sound and an enormous explosion, and we looked up and something in the World Trade Center had blown up,” his father told him. “We don’t know if it was a bomb, or a plane, or a missile, we have no idea what it was. For a Moment we thought it was a movie, but I don’t think this is a movie.”

Indeed that explosion was not a movie effect – it was a very real and terrifying moment in the city of New York that would shake the world forever. Dan described the chilling Moment he experienced with his father on the phone as he and others came to a realization of what was happening.

Amidst the explosions from the office building, papers from the offices began to emerge out of the smoke surrounding the skyscraper and flutter through the debris falling to the city’s streets outside his window. It was a moment of realization that humanity had been affected –those papers had been handled by people who were trapped in the offices above.

“That was the Moment for him of realizing this was not a movie,” said Dan. “There is not any way of pretending this is something other than what it was – a catastrophic tragedy.”

They ended the phone call so his father could find a safer place as the uncertainty of the situation engulfed the neighborhood and the nation beyond. Dan joined the rest of the country in turning on his television and watching the scenario of 9/11 unfold, knowing his father and many others he knew and loved were at the front lines of the tragedy.

His father, also named Dan, and other parishioners went into Trinity Church after the second plane hit the second tower.

“When the second plane hit, and all of the explosions started happening, there was so much debris falling that people in the church surmised there were hundreds of planes were hitting the city’s buildings.

“There was a guy that worked for my father who went downstairs and got trapped in the boiler room and couldn’t get out and heard explosions going off outside and thought the building was coming down at any time. The people in the church think they are going to die. At one point, this guy comes up to my dad and says, ‘I’ve just made my confession, I’m ready to go.’ And my dad turns toward him and says ‘And we’ll be there today in Paradise together.’ And he said ‘I know that, I know that.’

“About five minutes later they are still trapped in the church and the same guy comes up to my dad and says, ‘I’ve made my confession again, and I’m ready to go.” My dad says, ‘you made your confession? You made one five minutes ago?’ And he said “God’s a little busy right now, I don’t want him to miss it.’

“Someone started to play the organ and others began singing. They were so unsure of what was happening, they sought what they could be certain of: their faith.

The coming weeks turned into months and years that often brought reflection to Dan about this tragedy and what it meant. He noticed the tragedy was supremely indentified by the deaths – how many deaths resulted from the planes, the buildings, the rescuers’ efforts – and those people were spoken of as though they were worth remembering solely because they died.

It was a reminder, Dan said, that “we will never find the important things – love, hope, dreams – in a destroyed building. Those are found in the Creator who gave them to us the moment we were given breath.”

In the years since, a small chapel owned by Trinity Church adjacent to the World Trade Center named St. Paul’s Chapel that was miraculously unharmed by the explosions functions today as an informal museum with photos, cards, drawings, banners, flags and other memorabilia is visited by 1.5 million people a year. Dan’s father survived the tragedy and retired a few years later.

In 2003, Dan joined St. Luke’s, a church historically involved in social issues with a consistent reputation for its outreach ministries. Dan recounted how St. Luke’s was a church that started schools, job programs, and other influential practices in a time when not many other churches were doing so. “Now,” he said, “St. Luke’s is still that church but also a church that realizes it has to provide ministry and spiritual growth to its members so they can also be active in their own lives in the world.

“This used to be the place where it all happened,” said Dan. “We more and more are seeing ourselves where plenty happens here but we are also equipping our people to be the front lines of our ministry.”

Just as each scrap of paper fluttering through the debris of the fallen Twin Towers had been touched by someone, Dan’s – and all of our lives – were forever changed by those died, as well as those who lived through the tragedy 11 years ago today.

Next in Moments: Mike Luckovich, Pulitzer-Prize winning cartoonist for the AJC.