For the past several weeks, I’ve been absorbed with the story of Richard Jewell – thanks to a book and movie that have resurfaced controversial memories of more than 23 years ago.

Jewell was the security guard at Centennial Olympic Park the night of the bombing that caused the death of two people and injured a hundred others. Originally, Jewell was heralded as a hero who saved countless lives by trying to move people away from a suspicious backpack.

Days after the bombing, a source leaked a tip to the Atlanta Journal that federal agents believed Jewell had planted the bomb. The news made the front page, and it was quickly picked up by news organizations around the world. 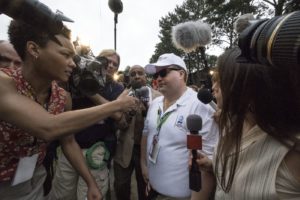 Then the news media staked out Jewell at the apartment where he lived with mother – disrupting any normalcy in their lives for two months. Federal officials finally acknowledged that Jewell was no longer a suspect. (Eric Rudolph was arrested in 2003 and pled guilty in 2005 of planting the bomb in Centennial Olympic Park).

Both the movie and the book provide deservedly sympathetic depictions of what Jewell experienced when he went from international hero to suspect and having his life held under a microscope to later being exonerated.

For me, the saga of Richard Jewell is an excellent opportunity for us in the media to reflect on our roles and responsibilities in covering and reporting news.

The book – “The Suspect: An Olympic Bombing, the FBI, the Media and Richard Jewell, the Man Caught in the Middle” by Kent Alexander and Kevin Salwen – provides a detailed and accurate depiction of the events from three vantage points.

The movie – “Richard Jewell” produced by Clint Eastwood – tells the tale from Jewell’s point of view. It has been criticized by some in the media for misrepresenting the journalist, Kathy Scruggs, who got the initial scoop from a source. And clearly, some of the scenes were fictionalized. Please read this piece from local blogger Nick Wolaver, who carefully presents a fact-versus-fiction description of the movie.

As someone who lived through Atlanta’s Olympics as a reporter and columnist for the Atlanta Journal-Constitution, I remember the drama surrounding Atlanta’s hosting of the world’s largest sporting event. 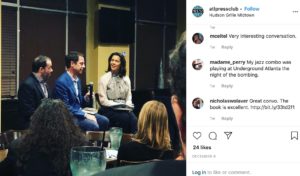 Looking back, the ‘90s were clearly the golden age of journalism at the Atlanta Journal-Constitution. We had such a robust team of reporters and editors covering every angle of the Olympics, and I was fortunate to cover the role Atlanta’s business and civic leaders played during that era.

The most memorable moments for me was a Sunday brunch after the bombing in the 40th-floor penthouse of Robert Holder, the co-chairman of the Atlanta Committee for the Olympic Games. Among those present were Billy Payne, ACOG’s president; former Atlanta Mayor Andrew Young, also co-chair of ACOG; Delta Air Lines CEO Ronald Allen; and retired Coca-Cola President Don Keough.

They all spoke of Atlanta’s spirit to rise from adversity.

“Every citizen of this country should stand a little taller as a result of what has happened here in Atlanta, both before and after the tragic event,” Keough said at the time. “You have to be proud of the leadership of the Games. After the bomb, I have never seen a group of leaders act more swiftly or more responsibly than they did. We are lucky.”

The other most memorable moment was the reopening of Centennial Olympic Park two days later. I’ll never forget Young’s passionate speech that comforted the thousands of people who had come for the event.

“We’re here to proclaim a victory. We’re here not to wallow in tragedy, but to celebrate a triumph of the human spirit,” said Young, who then described the green space as “the people’s park.”

All the journalists who were in Atlanta during the games all have our memories. 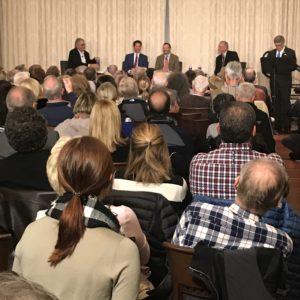 A program with the authors of “The Suspect” at The Atlanta History Center on Nov. 12 (Photo by Maria Saporta)

At a recent Atlanta Press Club event with the authors of “The Suspect,” Tom Johnson shared his recollections. At the time, he was president of CNN, and he made the decision to put the Atlanta Journal’s front page on air identifying Jewell as the target of the investigation.

Johnson had even called the highest-ranking official he knew at the FBI, who told him: “Tom, he’s the guy.” That’s when he gave the green light to go with the story, which spread like wildfire across the globe.

“It is one of the decisions I’ve regretted, not because it was untrue,” said Johnson, who has seen the movie twice. “It was true, but it almost became that Richard Jewell was the bomber. We staked him out at his house. We – law enforcement and the media – mistreated him and his mother. What bothered my conscience was the way we mistreated Richard Jewell and his mother through all that.”

It has always bothered me the Atlanta Journal-Constitution never settled or paid damages to how its coverage had turned Jewell’s life upside down. Doing so would have been an act of humanity and compassion, not an acknowledgement that its reporting had been faulty.

Journalist Henry Schuster, who was at CNN at the time, recently wrote a thoughtful piece in the Washington Post titled: “I helped make Richard Jewell famous and ruined his life in the process.” 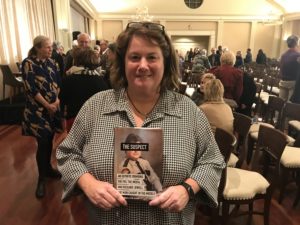 Dana Jewell, Richard Jewell’s widow, holds a copy of “The Suspect” at the Atlanta History Center on Nov. 12 (Photo by Maria Saporta)

“We in the media got it wrong, even though our reporting was right,” Schuster writes. “There’s the paradox: Jewell really was the FBI’s main suspect. Yes, the FBI has a lot to answer for, but this is about our responsibility.”

For Johnson, the lesson for journalists is to slow down.

Johnson thought the movie’s portrayal of Jewell “was magnificent” and that the movie captured the trauma brought on by the explosion of the bomb.

“Richard Jewell was a hero, and the movie portrayed him as a hero,” Johnson said. “I will go to my grave regretting what we did. We are human too.”

We all can learn from what happened 23 years ago.