Rights center to ‘take on the unexpected’ issues of the day, such as Sochi workers, African violence

Metro Atlanta hasn’t paid much attention to two global cases of alleged human rights violations, and yet they are good examples of the flexibility Atlanta’s National Center for Civil and Human Rights intends to bring to the raising of public awareness. 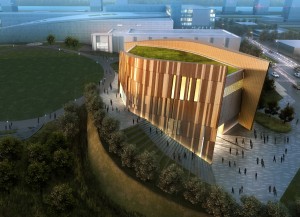 Allegations of abuse of construction workers preparing for the Sochi Winter Olympic Games have grown over the years. Violence in the Central African Republic has escalated just in the past month. The center’s curators would have ample time to prepare a Sochi program and would have to be nimble in the case of the CAR.

“Over time, as things arise, the center will be a place people will turn to for good information, insights, interesting perspectives on what they are getting a glimpse of if they are following what is happening in the news,” Shipman said.

There’s no suggestion the center envisions programs about either Sochi or the Central African Republic. These two situations simply present tangible examples for Shipman to discuss expectations that the center, due to open May 22, will provide smart programs on an array of topics both timely and timeless. 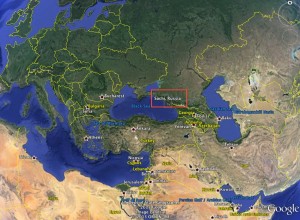 Some migrant constructions workers who built facilities for the 2014 Winter Olympic Games in Sochi were cheated of their wages, forced to live in unsanitary conditions, and had passports confiscated to compel their continued work, according to Human Rights Watch. Credit: earth.google.com

“The center’s really trying to do two things at the same time,” Shipman said. “Showcase the ongoing relevance of the civil rights movement and show Atlanta’s role. And, to talk about contemporary issues of human rights.”

Shipman said the center won’t compete with the Carter Center or duplicate its programs because the mission of the new center, located at Pemberton Place, adjacent to Centennial Olympic Park, is to educate and inspire. The Carter Center, according to its first guiding principle, “emphasizes action and results.”

The non-profit Human Rights Watch issued a report in February 2013 that alleged rampant violations of the rights of construction workers, particularly migrant workers. That was followed in June by concerns about gay rights, after the lower house of Russia’s parliament took the first step in passing a law that bans, “propaganda of nontraditional sexual relations.” This action fueled broader apprehensions about freedom of speech, and right of assembly, during the winter games.

These many facets present lots of potential programs regarding human rights that can be focused through the lens of the winter games. 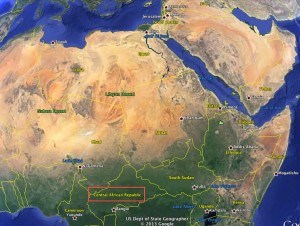 Sectarian violence in the Central African Republic has spread to attacks on civilians, prompting hundreds of thousands to flee their homes and hide in the bush, according to Human Rights Watch. Credit: earth.google.com

“Everybody will be watching Sochi as an Olympic games,” Shipman said. “Right around it are [issues] that would present a few different opportunities to talk about human rights.”

For example, the center could display a set of papers by Martin Luther King, Jr. that speak to the issue of voting rights for minorities in Russia, Shipman said. Interactive displays of the latest news could be presented in real-time via feeds from partners including CNN, Human Rights Watch and Amnesty International. The experiences of Olympic athletes could be explored in other exhibits and programs, such as one who Shipman predicted might say: “I can’t speak about certain things, or I might get kicked out of the Olympics.”

“All of these are examples to showcase how we are trying, over time, to cover issues, but to cover them in ways that take advantage of our environment so the center is vital in the conversation of human rights,” Shipman said. 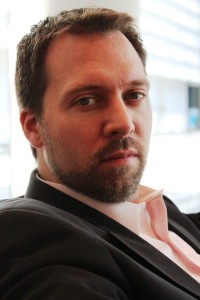 Since the report was issued, the pace of developments has been breathtaking.

On Sunday, the British-based Guardian newspaper reported the Red Cross had confirmed 13 deaths in the capital, Bangu, and that the Red Cross attributed the murders to “score settling.”

Shortly after noon Monday, the Daily News, of London, reported that a man had eaten the leg of a Muslim who’d been dragged off a bus and killed by Christians. The man said he wanted revenge for the murder of his pregnant wife.

Less than two hours after the cannibal incident was reported, BBC posted a report that chaos was ending and residents of the capital felt safe returning to their homes.

In this type of breaking news situation, curators at the center would have to work quickly to conceive and assemble displays and programs. This speed will be the bread-and-butter of programming that is tailored to fulfill the center’s mission of relating the message of human rights. These topical displays are designed to change by the week, always with an eye to events that affect civil and human rights.

“We’re really trying to build into our DNA, as an institution, the ability and willingness to update and take on the unexpected,” Shipman said. “We’ll make plans for what we think we will do, and be ready to showcase the issues as they occur. It comes from our general sense of trying to be relevant.”