Because she was from Puerto Rico, Rita Moreno had to play everything from Mexican spitfires to Native American maidens to doomed Asian lovers.

“Rita Moreno: Just a Girl Who Decided to Go for It” looks at her 70-plus years in show business with an appealing combination of awe and candor. 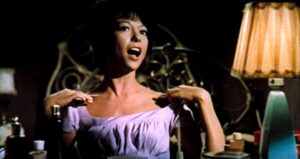 Taking its title from a T-shirt she likes, the documentary reminds us of her outsized talent and uphill battle in an industry that really didn’t know what to do with someone who could sing, dance, act and looked, as she puts it, like a Hispanic Elizabeth Taylor.

That’s how she presented herself decades ago when she and her mother were invited to meet mogul Louis B. Mayer in his penthouse suite at the Waldorf. The teenager and her mom were still so naive they didn’t know what the PH button on the elevator meant.

But smarts – which Moreno clearly has – weren’t what Mayer was looking for. Neither was fellow mogul Harry Cohn, who crudely propositioned her, or her own agent, who actually raped her (despite that, she ruefully admits, she remained with him). It was humiliating enough to be a woman in Hollywood, but for a Latina, things were even worse. 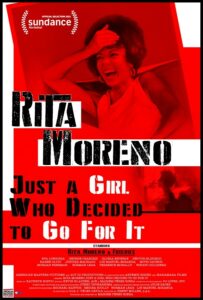 Poster of ‘Rita Moreno: Just a Girl Who Decided to Go for It”

Yet, the documentary is in no way a downer. How could it be given Moreno is one of those rare creatures, an “EGOT,” i.e., she has won an Emmy, a Grammy, an Oscar and a Tony. The Oscar came for her most famous role, Anita, in the movie “West Side Story.” After her charmingly rushed and breathless acceptance speech, she didn’t make another movie for seven years.

Yet she kept busy, on stage and TV and with a dismayingly on again/off again affair with Marlon Brando which ended with a suicide attempt – and a movie with Brando, the little-seen “The Night of the Following Day.”

“Just a Girl” reminds us of all the ways we’ve known Moreno: as the ingénue, Tuptim, in “The King and I,” as a cast member on “The Electric Company” (along with Morgan Freeman), as Sister Peter Marie in “Oz,” as the grandmother on the re-boot of “One Day at a Time.”  Interviewees range from Norman Lear and Lin-Manuel Miranda (they co-produced the picture) to Freeman, Hector Elizondo, Eva Longoria, Whoopi Goldberg and Gloria Estefan.

Even so, Moreno herself remains front and center. In her late 80s when the movie was made, she is still a fount of energy, charisma and self-effacing humor.  And, most of all, just a “girl” who decided to go for it. And won.

The documentary Rita Moreno: Just a Girl Who Decided to Go for It” is available on demand.