Award-winning documentarian Morgan Neville has always been astute in his choice of subjects. His “20 Feet From Stardom,” about A-list back-up singers, nabbed him an Oscar while “Won’t You Be My Neighbor?,” about Fred Rogers all but elected him to sainthood. 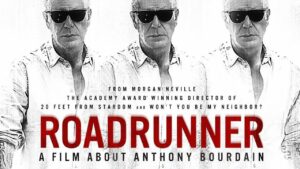 Poster of “Roadrunner” – a documentary about Anthony Bourdain

Bourdain radiated a kind of punk-rock authority, in the kitchen, on the page and, ultimately, in front of the camera. You felt drawn to him, even if you felt you couldn’t entirely trust him. He was an outlaw insider, willing to not only eat a cobra, but swallow its still-beating heart.  And describe it for us.

Neville captures lots of moments like this as he watches Bourdain road-run around the world.  He also shares his subject’s ruminations on everything from first-world privilege to third-world desperation. Bourdain on death? Maybe he should be tossed in a wood-chipper and scattered about Harrod’s.

This is hardly a throwaway. As most of us already know, Bourdain inexplicably committed suicide, hanging himself while in France in 2018. “Roadrunner” wisely makes no attempt to explain why but, perhaps less wisely, the film makes little attempt to explain almost anything about Bourdain. It’s as if Neville ran into a nut he couldn’t crack. 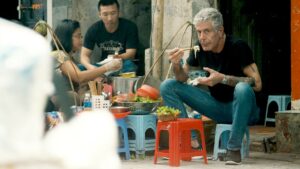 A scene from the “Roadrunner” documentary about Anthony Bourdain

The film is a semi- informative look at a decidedly opaque man.  A charmer, yes.  Also, an intellectual with a sensitive side and a cynic with a snarky streak.  Some insight is provided by friends, colleagues, girlfriends, ex-wives and a smattering of celebrities (David Chang of Momofoku and Eric Ripert of Le Bernadin).

But by the end of “Roadrunner,” we don’t feel we know Bourdain any more than we did after an episode of “Parts Unknown.” Perhaps that was Neville’s intention: the old enigma-wrapped-inside…

Unfortunately, that makes for an unsatisfying film, one that feels repetitive and a lot further than 20 feet from Anthony Bourdain’s particular stardom.

“Roadrunner” currently is in selected movie theaters, and it is available on demand.