Roberto Goizueta’s legacy lives on in Atlanta through family foundation

Upon walking into the new offices of The Goizueta Foundation off Northside Parkway, one is immediately enveloped with the presence of the late Roberto Goizueta, the legendary CEO of The Coca-Cola Co.

The secondary aura one feels is the presence of his widow, Olga C. de Goizueta, chair emeritus of the foundation who guided the foundation through most of the 17 years since her husband passed away.

Today, the day-to-day activities of the foundation have been turned over to the next generation — to the Goizuetas’ three living children — Roberto Goizueta; Olga Goizueta Rawls, who serves as its chair and CEO; and Javier Goizueta.

But the three Goizueta children have intentionally transformed the foundation’s offices into what could be considered a museum or a shrine to their father’s and mother’s legacies. 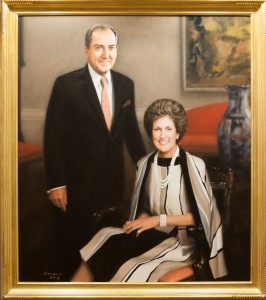 Portrait of Mr. and Mrs. Roberto Goizueta (images courtesy of the Goizueta Foundation)

The first image upon entering the offices is of a life-size painting of Roberto and Olga Goizueta, painted by Atlanta portrait artist Ross Rossin. The painting was a surprise gift unveiled at their mother’s 80th birthday party on April 18 at the foundation’s new offices.

Daughter Olga Rawls smiled as she recalled her mother’s astonishment and pleasure at seeing the portrait of her and her husband welcoming visitors to the offices.

It is only one of many touches that keep Roberto Goizueta’s legacy and values ever-present in the foundation’s offices.

The family has created an almost exact replica of his office at The Coca-Cola Co., and one can almost imagine Goizueta at his desk working or sitting with guests around the coffee table in his office.

Directly across the corridor from his office is the office of Mrs. Goizueta — giving the two of them an opportunity to sit across from each other in this life and beyond. 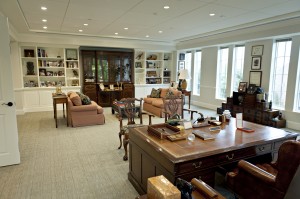 Replica of Roberto Goizueta’s office at the Coca-Cola Co.

But the core reason for creating a museum-like office is so that those interested in developing a relationship with the ultra-private foundation will truly understand the essence of the man and the family, and their values.

“Our father’s inspiration is evident everywhere at the foundation,” Rawls said. “His own story of being given the opportunity to come to America from Cuba to learn and eventually lead a company like Coca-Cola is captured in our focus and on our walls. He is present with us every day.” 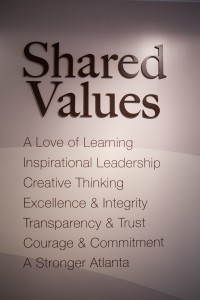 Shared Values of the Goizueta Foundation and family

The walls of the foundation’s offices are purposefully designed to explain what Goizueta stood for and what the foundation stands for.

The “shared values” are a love of learning, inspirational leadership, creative thinking, excellence and integrity, transparency and trust, courage and commitment, and a stronger Atlanta.

“The gallery was designed to tell the foundation’s story through the life of our father to grantees and prospective grantees,” Rawls said. “Each section represents one of the shared values, so that by the time you’ve walked through it, you have a better understanding of who he was, who we are and what we expect of our partners.” 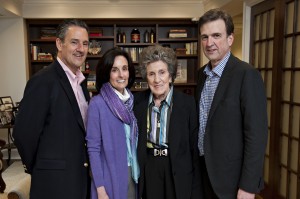 It is working with longtime grantees to develop strategic STEAM initiatives so students can have a more well-rounded education.

“The whole point of this is to transform the way of thinking about education,” said Kevin Glass, head of the Atlanta International School. The goal is to weave all these subjects into a multidimensional educational experience to best prepare students for the skills the world is going to need in 20 years.

The Goizueta Foundation provided the International School a $1 million grant in May to develop and accelerate its STEAM initiative. It is an evolution of a long-standing relationship that the foundation and the school have enjoyed.

Glass said he is seeing the children translate and continue the legacy of their parents through the foundation. 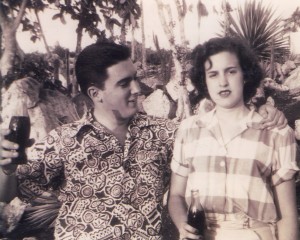 A long-lasting love: Roberto Goizueta, then 16, with Olga, 14, in Cuba. Both are holding bottles of Coca-Cola.

“It’s refreshing to me to see the generational legacy of the foundation,” Glass said. “They are projecting it forward so it will have an ongoing impact on the future.”

Georgia Tech also has been a beneficiary of the Goizuetas’ new focus, receiving a $5 million, five-year grant to support and enhance a research-based model called GoSTEM (for Goizueta STEM – before Arts was added). It targets academic achievement in K-12 – specifically for Hispanic and Latino students.

“The credibility of the Goizueta Foundation name opens doors,” said Donna Llewellyn, Georgia Tech’s associate vice provost for learning excellence and director of the Center for Enhancement of Teaching and Learning.

“This gave us an opportunity to reach out in the Hispanic community in the STEM area. We are having success in getting students coming here and becoming more engaged and educated in STEM.”

Rawls said the foundation is not interested in funding the status quo. Instead it wants to challenge organizations to “think big” and “to take intelligent risks.”

For her brother, Javier Goizueta, it is all about the new generation taking the baton.

“When we were small, dad put the fear of God into us,” Javier said. “Our last name is a brand, and we have to polish it every single day.”

Their father had high expectations of them and every one around him. It is clear the children still want their father to approve of how they are running the foundation. 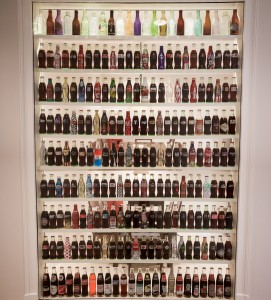 Wall of different Coca-Cola bottles in the Goizueta Foundation office