Georgia is going to be hard pressed to transport the poor, elderly and disabled from home to health care in rural parts of the state, according to an analysis of a new report by the Governor’s Development Council. 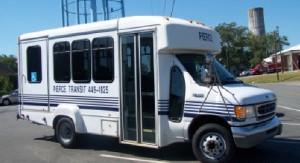 Pierce County already coordinates its transit service to contain costs, which is a method the state hopes to expand in order to address the rising cost of rural health transit programs. Credit: Pierce County

The consequence is that rural Georgia may become an increasingly difficult place to live for current residents who hope to age in place, and for those who move from a city to a small town or the countryside. The government likely will have to determine whether to pay for a steep rise in the cost of helping rural Georgians travel to see a doctor or get treatment such as dialysis.

Two years ago, consolidation of service providers seemed to be the solution for containing costs. The idea was that costs could be lowered through better management of services provided by three state entities – the departments of transportation, human services and community health.

Further research suggests that better coordination may not yield significant savings – because there’s already a good bit of coordination.

“In 80 percent of the counties, coordination is occurring,” said David Cassell, the state’s Rural and Human Services Transportation program manager.

For example, Pierce County coordinates two services to provide Pierce County Transit, according to Cassell’s report. Fares range from $4 for a 10-mile trip to $20 for medical trip of up to 100 miles. Seniors and the disabled get a 50 percent discount, and the attendant of a disabled person rides at no charge, according to the county’s website. 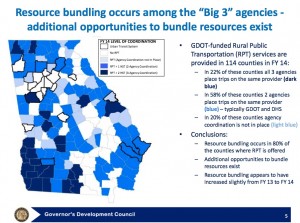 Click on the image to see a larger version.

One area of potential savings is in non-emergency transport, Cassell said Wednesday during his presentation to the council.

The non-emergency transports involve rural Georgians who need to travel long distances for medical care. The trips tend to be longer than the home-to-doctor trips, and the destinations are unique to a particular patient – meaning that there’s no economy of scale to be achieved by better management.

Based on the new findings, the council is considering four recommendations on ways to address the projected increase in costs. None seem to offer the silver-bullet solution that appeared possible in 2012, when the notion of better coordination offered the prospect of savings that other states that use that approach seemed to realize.

The four recommendations are: 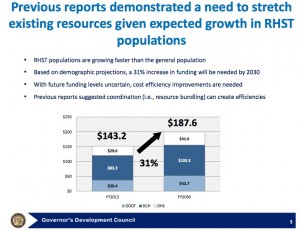 Click on the image to see a larger version.

The schedule calls for public and state entities to have a draft version by July 1. The council is slated to approve a final report on Aug. 13 and deliver it by a Sept. 1 deadline to the Office of Planning and Budget. OPB is the governor’s budget-writing arm and is to present the report to the state Legislature in January 2015.

One bright spot is that the current research indicates that costs are no longer expected to rise as dramatically as first predicted.

In each case, the forecasts were based on research indicating that the needy population is increasing faster than the general population. The objective is to maintain, if not improve, the current level of service.