Though the Screen Actors Guild Awards are only 27 years old, they have a considerable impact on their Big Bro, the 93-year-old Academy Awards. SAG’s Best Ensemble Award is considered a clear prognosticator for the eventual Best Picture winner at the Oscars.

True, SAG has been right 12 times, but there were also a lot of years when the eventual Oscar winner wasn’t even nominated for Best Ensemble. It happened quite recently with “The Shape of Water” and “The Green Book,” neither of which were contenders for SAG’s top prize. 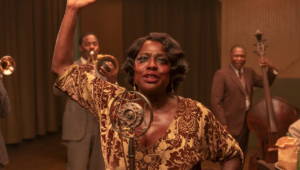 This year, Oscar front-runner “Nomadland” wasn’t nominated either (the SAG award went to “The Trial of the Chicago 7”).  My theory is that much was made about how many in the cast were “real” nomads, non-professional actors who lived the nomad life. It’s pretty unlikely they joined SAG to make the movie. Unions are typically unfriendly to those who don’t become members. And, since actors make up the biggest chunk of the Oscar voters, that could bode ill for both McDormand and her film.

Interestingly, if you factor in her awards for television roles, Davis has won more SAGs than any other actor. This is her 6th prize.

I’m not sure if that makes her a frontrunner for an Oscar. There’s the cancel-out factor of another Black actress, Andra Day, who plays a somewhat similar role in “The United States vs Billie Holliday.” The fight still seems to be between McDormand and Cary Mulligan (“Promising Young Woman”).

The SAG telecast itself was more than a little odd. It was pre-recorded and the nominees already knew who won; only Viola Davis tried to pretend it was a surprise, making a big “L’il Ol’ Me????”  fuss, but doing it quite convincingly. No wonder the show barely lasted an hour. And that includes awards to TV winners, including Jason Sudeikis who repeated his Golden Globes triumph for “Ted Lasso.” (This time, instead of the much-remarked-upon tie-dye hoodie, he wore a My Body My Choice T-shirt).

Still, even at an hour, the telecast seemed padded. The show opened with the now-traditional “My name is BLAH, and I am an actor.” Then, to separate the award moments, actors were asked to talk about actor-y things. Like their first headshot: Josh Gadd posed with a bench; Rita Moreno tried to pass herself off as a Hispanic Elizabeth Taylor (at 89, she is still ungodly gorgeous). 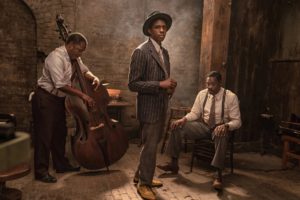 Then they talked about lying when asked what special skills they had – everything from playing the harmonica to horseback riding.

Worst Moment: Gabrielle Carteris, president of SAG-AFTRA, praised Hollywood for “bringing hope and solace to this nation” during the pandemic. The current box-office champ, “Kong vs. Godzilla,” brought a lot of things, but I’m pretty sure “hope and solace” weren’t among them.

Best Moment: Tie – Frank Langella’s gracious acceptance speech on behalf of the “Chicago 7” cast, which evoked Dr. Martin Luther King, Jr. who was assassinated on April 4 in 1968, and the late Chadwick Boseman’s widow, Taylor Simone Ledward, who looked lovely and spoke beautifully. Seems to me she’ll need one more stunning dress and one more heartfelt acceptance speech before this is all over.