Public interest in a fresh Georgia Tech study of the Northside Drive corridor in Midtown is being fueled by the proposed sale of state-owned land at Atlantic Station that was purchased as the site of a major transit station to serve northwest metro Atlanta. 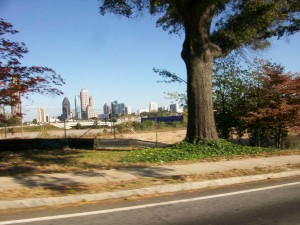 The state now intends to sell this site along Northside Drive, located near Atlantic Station, that once was intended to be developed as a transit hub. Credit: David Pendered

The 6.5-acre site was put on the block by the State Road and Tollway Authority, according to several officials who spoke Monday. Gov. Nathan Deal serves as SRTA’s chair. SRTA bought the site when then-Gov. Roy Barnes envisioned it as a transfer hub for future buses to and from Cobb County, commuter rail service, and possibly an Amtrak station.

Tech’s study of Northside Drive may already have influenced city policy. Moments before preliminary results were presented Monday to a crowded room, Atlanta’s transportation planner, Josh Mello, announced the city has decided to include Northside Drive as a transit corridor in the soon-to-be-concluded update of the comprehensive transportation program, Connect Atlanta. 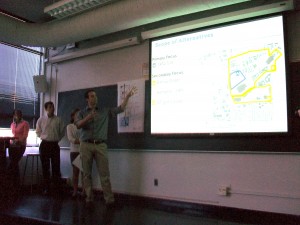 Discussions of all these potential developments unfolded in a scenario that typically generates scant public attention – a student studio in Tech’s School of City and Regional Planning.

The class is taught by Michael Dobbins, a Tech professor of practice and former Atlanta planning commissioner. Dobbins’ last Atlanta studio won state and national awards for its insights into redeveloping Fort McPherson.

McClinton and Dobbins have talked for more years than either cares to remember about retooling the section of Northside Drive from I-75 to I-20.

Dobbins describes Northside Drive in terms of its potential for reconnecting the city’s historic neighborhoods on the east and west sides of the central business district.

These communities have been separated by construction of the Downtown Connector and institutions such as the Georgia World Congress Center, Philips Arena, Georgia Dome – and the large parking structures built to accommodate passenger vehicles.

McClinton has tended to speak more forcefully about Northside Drive as a potential reliever for the traffic congestion that hounds the Downtown Connector. A revived Northside Drive also could be connected to I-20, which would ease gridlock near Turner Field while improving the economic viability of neighborhoods near a possible interchange.

Previous Article
An amazing tale of three men and a miracle drug changing lives of millions
Next Article
With AirTran acquisition, Southwest Airlines is thinking internationally