Passing the referendum for the transportation sales tax will require a majority vote from an Atlanta region that elects congressmen whose political positions on transportation funding are starkly divided.

Suffice to say that this group of five Republicans and three Democrats does not often vote together. Earlier this year, they joined many of their colleagues in Congress in spliting along party lines over the reauthorization of the nation’s transportation funding program – leaving the nation with no transportation spending plan after the current one expires June 30.

But their constituents will have to come together if the transportation sales tax proposal is to prevail. 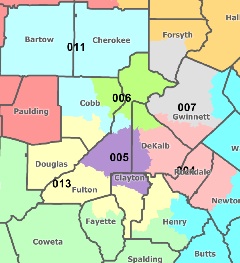 This prism of congressional politics seems helpful when considering recent polls that have different results about the likelihood the tax will be approved.

The results are so far apart that they do not shed much light on voter sentiment toward the transportation bill.

One poll of 600 likely voters, conducted by the advocates, shows 51 percent of voters will vote yes. The announcement did not include any information about the demographics of voters polled, nor did it include the margin of error.

WSB-TV released a Rosetta Stone poll that showed 42 percent of likely voters will vote yes. The margin of error was plus or minus 3 percent, and the news report did not include any information about demographics of those polled.

A 9 point difference would seem to point to a wide divergence of opinion in the region.

That same divergence appears in a reading of comments posted on various blogs that cover the topic, though the opponents do seem to be more strident in their position. But that’s just a back-of-the-envelop calculation.

Metro Atlanta’s congressional delegation has been relatively stable for a number of years. That would indicate the members are voting in Congress as their constituents want them to vote, as well as paying attention to routine services for the folks back home.

These are the same voters who will cast ballots on the July 31 transportation referendum.

The congressional delegation fell into party line over the federal transportation bill. For this discussion, the metro Atlanta delegation is defined as if the new boundaries that take effect for the November election already were in place.

Earlier this year, Congress could not resolve philosophical differences over funding of the nation’s roads and transit systems before the previous continuation funding bill was set to expire March 31. When those negotiations collapsed, President Obama signed a 90-day continuation bill to forestall a shutdown of federally funded highway and transit projects.

In April, metro Atlanta’s delegation split along party lines for a bill backed by House Speaker John Boehner. This version of the bill extended transportation and transit funding and is in a conference committee of the House and Senate.

The bill also contains two other provisions: It would allow the use of coal ash to be used in road pavement, a process that the Environmental Protection Agency is trying to halt; and it would allow for construction of the Keystone XL pipeline, which would transport oil produced from Canadian tar sands to Texas.

This is the campaign sign used by advocates of the transportation sales tax referendum. Credit: Metro Atlanta Chamber

The metro Atlanta delegation also split along party lines on the most recent vote taken on the transportation bill – a procedural vote on May 18 regarding an instruction to the conferees who are to work with conferees from the Senate to craft a bill that will pass both chambers.

Given this divide in metro Atlanta’s congressional delegation, the uncertainty about the potential passage of the transportation bill is understandable. Given that the Sierra Club has joined Tea Party members in saying the plan is not the best solution to the region’s mobility woes, the field does seem wide open.

This is the congressional delegation, as of the latest congressional redistricting, that represents the 10-county metro Atlanta area, according to Georgia’s Congressional Reapportionment Office: