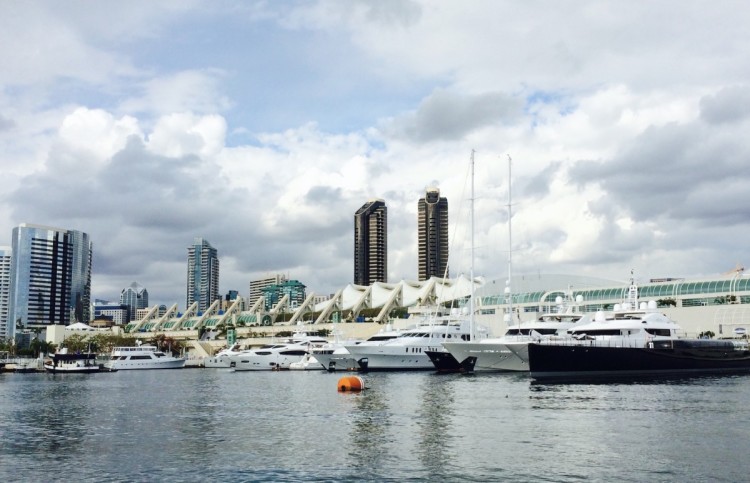 SAN DIEGO – Atlanta and San Diego share more than Top 5 rankings in the competitive convention business. Both favor architecture designed by Atlanta architech John Portman’s company, and both have litigated over the use of the hotel/motel tax to fund public projects. 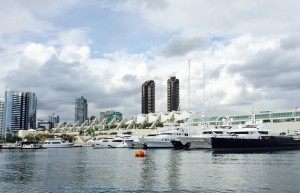 Of course, other similarities exist. Airports, for instance.

Not to overlook pro baseball, where both teams ended the 2015 season ranked fourth out of five in their division. The Braves ended at 0.414 percent, with 67 wins and 95 losses, according to espn.go.com. The Padres ended a little better, at 0.457 with 74 wins and 84 losses.

Both cities share an appreciation for Portman’s architecture and development.

On the northern tip of San Diego’s Embarcadero waterfront district, cranes are preparing to raise a dual branded Marriott hotel with 800 rooms that’s being developed by Portman Holdings and partners including the Port of San Diego. Horizontal construction appears to be almost complete and the facility is slated to open in 2016.

Incidentally, there’s an important distinction in the oversight of destination facilities in Atlanta and San Diego. In Atlanta, the Georgia World Congress Center and future Falcons stadium are owned and operated by an authority created by the state of Georgia. In San Diego, the San Diego Convention Center and some other properties are owned and operated by a creature of San Diego’s consolidated city/county government – the San Diego Unified Port District. 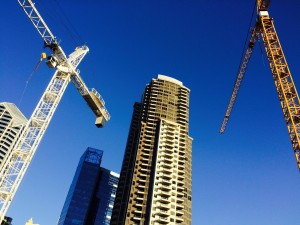 Portman Holdings, of Atlanta, is in a partnership to develop a dual branded Marriott hotel on a 5.7 acre site that once was part of Lane Field, home of the San Diego Padres until 1957. The property is located in front of this residential tower, along Harbor Drive, north of the San Diego Convention Center. Credit: David Pendered

The Marriott hotel is being built atop the former Lane Field, where the Padres baseball team played until 1957, when they moved to Mission Valley. Once complete, the structure will serve as Marriott’s Residence Inn and SpringHill Suites, operating under the same roof.

After the Padres moved to the suburbs, Lane Field was turned into a parking lot for the general public and cruise ship passengers. Now, after more than a decade of effort, the port district and its private partners are redeveloping the site into a hotel facing the Pacific Highway, and a 2-acre public park that’s to face Harbor Drive and overlook San Diego Bay at the northern end of the Embarcadero.

In another similarity between Atlanta and San Diego, Lane Field has a place in the annals of civil rights.

Jackie Robinson and two other black ballplayers from the Negro League worked out in a closed session at Lane Field. Under the eye of Brooklyn Dodgers General Manager Branch Rickey, the African American players practiced on Oct. 7, 1945 in preparation for desegregating Major League Baseball, according to the book, Jackie Robinson’s Signing: The Real Story, Part Two, by John Thorn.

Portman developed a hotel that’s likely to remain more prominent than the future Marriott. It’s a high rise Hilton located at the opposite end of the Embarcadero, across Harbor Drive and trolley tracks from the current home of the Padres, Petco Park.

This Hilton anchors the southern end of the tourist/convention district. The hotel opened in 2008 complete with artwork befitting Portman’s interest in sculpture, a collection of outdoor pieces titled, “Wind Palms 2008.” Sculptor Ned Kahn created seven installations of stainless steel sculptures that rotate and flutter in the breeze, giving a physical form to the west winds that long ago brought Spanish conquistadores past Point Loma into San Diego Bay and still blow today.

Kahn is a renowned California sculptor who specializes in environmental themes. Kahn won a McArthur Foundation “genius grant” fellowship in 2003. 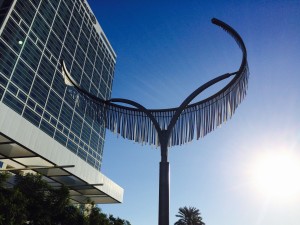 This is the point at which the paths diverge in the woods for San Diego and Atlanta.

The hotel/motel tax is the dividing point.

Atlanta is using its occupancy tax to help fund construction of the new Falcons stadium. Although a group of Atlanta residents filed a lawsuit to prevent the hotel/motel tax from being used for this purpose, the residents lost their bid. Residents lost in both Fulton County Superior Court and Georgia Supreme Court. The city, having prevailed, is proceeding with plans to provide the Falcons with up to $200 million for the new stadium.

The city lost a lawsuit filed by residents to block usage of the occupancy tax to fund an expansion of the convention center and a second phase of the Hilton hotel, which was to be another Portman project.

A California appellate court upheld a lower court’s ruling that voters should have been provided the opportunity to vote on the use of the occupancy tax to expand the public facility. The appellate court ruled such a usage of the hotel/motel tax as unconstitutional.

Four years of planning for the expansion went up in smoke. San Diego’s civic leaders are still trying to determine the next course of action. All sorts of proposals are floating, including one by the editorial board of the local newspaper, The San Diego Union-Tribune. 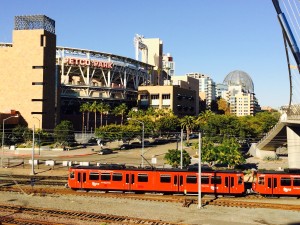 The U-T board supports a proposal that would bring the San Diego Chargers NFL team in from Qualcomm Stadium to be part of an expanded convention center. The move would consolidate sports venues near the convention center and, in theory, entice the Chargers to stop threatening to pull out of San Diego and move to Los Angeles – which is authorized to host an NFL franchise.

Former Padres owner John Moores paid for a number of feasibility studies. A shared facility priced above $1.4 billion was the outcome of one such such stud. In addition, a proposed facility with a convention center beneath an elevated football field was drawn by Populous, the same Kansas City-based company involved with initial planning for the Falcons’ Mercedez-Benz Stadium.

According to the U-T editorial:

Meanwhile, the clock ticks on the center’s major convention – Comic Con International – which attracts upwards of 130,000 conventioneers and is growing to the point that sponsors want a larger venue.

Comic Com’s contract is due to expire in 2016. Whether sponsors renew in San Diego, or consider moving to a place with a fantasy industry growing around the film business, say, Atlanta, remains to be determined. 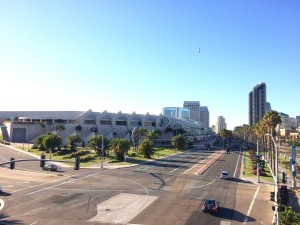 Looking north from the Hilton Hotel, the San Diego Convention Center is on the left and hotels and residences line the right side of the corridor. Petco Park is just out of sight, to the right of the traffic lights. Credit: David Pendered 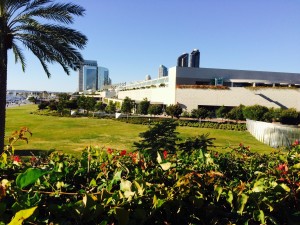 San Diego civic leaders intend to expand the San Diego Convention Center. One plan that’s been discussed is to expand on this side of the existing property, toward San Diego Bay. Credit: David Pendered

Previous Article
Beirut, Paris and the sudden enthusiasm for the French
Next Article
Working Together to Meet Complex Health Challenges