Sandy Springs faces test of its vision for a pleasant, walkable downtown

A significant test of Sandy Springs’ commitment to its vision of a pedestrian oriented downtown is to get its first public hearing Thursday before the city’s Planning Commission. 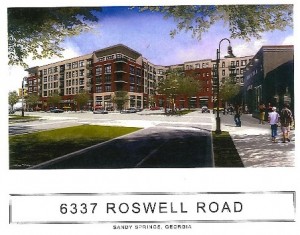 Sandy Springs city planners have said a proposed four-story apartment building along Roswell Road north of I-285 is too dense for the city’s planned walkable downtown. Credit: Sandy Springs

A developer proposes to rezone 10.9 acres along Roswell Road in order to build 329 apartments and 16,000 square feet of retail at the current Marshall’s Plaza. City planners say the four-story project is simply too dense for the walkable town center Sandy Springs intends to establish along this stretch of Roswell Road.

In a sense, this rezoning hearing is an early indication of how officials in the fairly new city of Sandy Springs intend to shape its future built environment.

Metro Atlanta’s current building cycle is the first one to present development-related decisions to Sandy Springs’ city government. Since the government was formed in late 2005, it has focused on establishing itself and fulfilling campaign promises to provide traditional city amenities.

Sandy Springs has developed an array of parks, established city services, and now has created a master plan that’s to provide a new identity for the city’s downtown district that flanks Roswell Road.

Quintus Development proposes this site plan for the redevelopment of a strip shopping center. Roswell Road is on the left. The proposed apartment building is in the center. Click on the image for a larger version. Credit: Sandy Springs

A new facility named City Center is to be the anchor of the new downtown. Carter and Selig Enterprises were chosen as master developers of a center that is to provide government office space, residential and retails, green space, and a performing arts center, according to legislation the city council adopted in September.

Now, a private developer proposes to add a significant number of apartments within walking distance of City Center.

Quintus Development contends its proposal is in complete accord with the city’s objectives in this part of town.

For starters, Quintus indicates in its rezoning application, the site is about to become a zombie.

Marshalls department store is to vacate the property before the end of this year. It will leave a site that was zoned in the 1950s and 1960s for a strip shopping center of 100,000 square feet. The only retail that’s not located behind a big parking lot is a Hudson Grille restaurant and BB&T bank building, according to the application.

Quintus’s application says the company will replace everything but the restaurant and bank with a modern mixed use project that’s consistent with the city’s development plan.

The proposed development is of a “human scale,” that will be developed on a grid pattern. And, it complies with the city’s desired density of more than 20 homes per acre in this area.

City planners tend to offer alternatives to elected officials who determine public policy. They did so in this case, as well.

If the mayor and city council do grant the rezoning, city planners suggested, the rezoning should be conditioned so that no more than 217 apartments can be built. All of the retail space could be built, according to conditions the planning staff included at the end of its report.