Sandy Springs’ efforts to build a fire station, add sidewalks and relieve traffic congestion in a high-traffic area near the City Springs municipal complex illustrate the challenges of retooling urban spaces when private owners object to the plan. 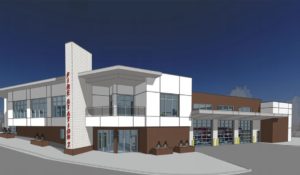 Sandy Springs’ plan to build a new Fire Station No. 2 is at the heart of a legal dispute over the city’s effort to rejuvenate its downtown area. Credit: sandyspringsga.gov

In the most recent situation, an outdoor advertising company is fighting the city’s efforts to remove the company’s billboards. The city owns the land and now wants to use it as a driveway for a temporary fire station. The company continued to rent space on the site, 6215 Roswell Road, following the city’s purchase of the land in 2016 from the company’s previous landlord.

The situation is part of the whole-cloth rejuvenation of this area that city leaders have been devising and developing since voters established the city in 2005.

A related project, this one involving sidewalks and traffic, intends to address long-standing problems west of Roswell Road, along Mt. Vernon Highway and Johnson Ferry Road. City officials opted for a scaled-down version of a solution, rather than face the processing of condemning private land for a public greenway. The result will be greenspace of about 0.8 acres, rather than 2.5 acres.

In the case of the billboard issue, Sandy Springs is poised to advance its plans to use the site as a driveway for emergency vehicles to be located at a temporary fire station. This station is to serve while a permanent replacement for Fire Station No. 2 is built. The sign company, Outfront Media, doesn’t want to remove the billboards.

Here’s how the city described its plans for the property:

The city won a summary judgment in November, 2019 in Fulton County Superior Court. In December, the company appealed a ruling that gave the city the right to remove the billboards, according to a statement from the city. 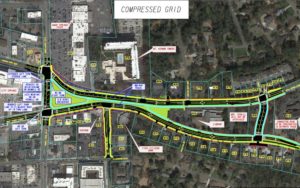 Sandy Springs opted for a smaller greenspace east of Roswell Road rather than face the likelihood of condemning property to create a public space. Credit: sandyspringga.gov

Sandy Springs’ leadership determined it doesn’t intend to delay construction plans during an appeal process that it says could last two years.

The city filed an emergency motion Jan. 17 seeking permission to remove the billboards, according to a statement released Jan. 24:

The replacement of Fire Station No. 2 is part of the city’s plans to retool and revitalize an area it’s grooming into a new central gathering point.

This area is located around City Springs, the city’s multi-use complex about a half-mile north of I-285. This stretch of Roswell Road has served for decades as an entertainment and dining destination.

Along with the new fire station, the city intends to retool two high-traffic roads popular with commuters traveling between the west side of Sandy Springs and the Perimeter business district. These two roads create an “X” shape, at an intersection just east of Roswell Road, and have been clogged with traffic for years – Johnson Ferry Road and Mt. Vernon Highway.

Johnson Ferry Road has a bridge over the Chattahoochee River and, as such, is a major gateway for travel between Cobb County and the Perimeter area. Mt. Vernon Highway is a popular access route between I-285 and the northern portion of the Perimeter area.

The retooling of these roads has been in discussion for about a dozen years. Sandy Springs is moving ahead with this project and the Sandy Springs City Council is slated to review potential designs of park space at its Feb. 4 meeting.

The next step is for the city to acquire property for the project. Construction could begin in the autumn of 2021.

Why save it? Just pave it – Conservation becoming tool of choice in Morgan County
Peter Dye March 15, 2020 4:38 pm