Sandy Springs has moved into the public comment phase of a redevelopment study of the Roswell Road corridor that has an interesting objective: Success.

Mayor Eva Galambos rattles off from memory two previous efforts that came to naught, the first of them in 1967. That was 38 years before the community incorporated, and occurred at a time when Sandy Springs wanted to become the retail district that instead went in 1971 to Perimeter Mall. A second study in 2002 fizzled out. 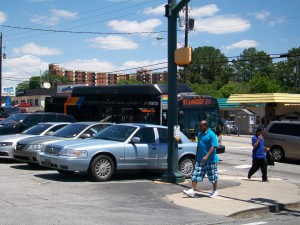 From this? – Roswell Road and the adjacent area is being evaluated for its potential redevelopment. Photos: David Pendered

“In neither instance did we know the property owners, and in neither case did we have economic realities as part of the plan,” Galambos said Thursday. “I don’t want anymore plans that are pie-in-the-sky and not realistic.”

Goody Clancy has its work cut out in Sandy Springs.

The city has not been spared the reality of the recession and its lingering aftermath. Vacant storefronts and available homes remain in several developments that sprouted up during the heyday of the suburban renaissance movement, which swept Atlanta’s close-in suburbs in the early 2000s.

Part of the problem facing those projects is the vicious circle of construction finance, according to several developers who lost their projects to lenders.

The developers explained that new places are expensive to build. That means leases are expensive, which results in restaurants or shops pricing their products accordingly. Often, they are too costly for the everyday needs of many nearby residents and the shops fail.

That said, Sandy Springs’ current redesign effort begins with support from the business community. In April 2011, the Main Street Alliance presented its wish list to a receptive Sandy Springs City Council. At the time, Galambos said it was the first time property owners joined in the conversation about reshaping the city’s downtown area.

One of the alliance’s main recommendations was for commercial properties to be allowed to share parking, storm water retention and greenspace, rather than require each property to provide for itself. Another idea was to create zoning codes that allow homes and shops to be built on the same property.

The area remains a busy commercial core where pedestrians, bicycles and cars vie for space on sidewalks that serve as driveways into strip shopping centers. Some cross-streets that seem to be tiny actually serve as arterials that drivers use to travel among Cobb, Fulton and DeKalb counties.

Goody Clancy also will evaluate the site of the now-vacant Target store, which the city purchased with ideas of demolishing and replacing with a City Hall or some type of public gathering place.

Galambos remembers the site as the home of Richway. The discount department store is what Sandy Springs got when its 1967 redevelopment called for Rich’s to build the type of flagship store that it later opened at Perimeter Mall.

The mayor said she thinks the Roswell Road corridor would benefit from more housing developments, such as condos or townhomes. The residents would support the shops and restaurants that hopefully will open. The area needs to have greenspace, though Galambos added: “We can’t be so green as to be unrealistic.”

Goody Clancy’s partners on the project include Kimley-Horn, W-ZHA, Zimmerman-Volk, and Farr Associates. The current schedule calls for draft versions of various designs to be complete from the end of summer through November.

Click here to see a link to the project from the city’s home page.

Click here to read about Goody Clancy’s urban design for the Clifton community.