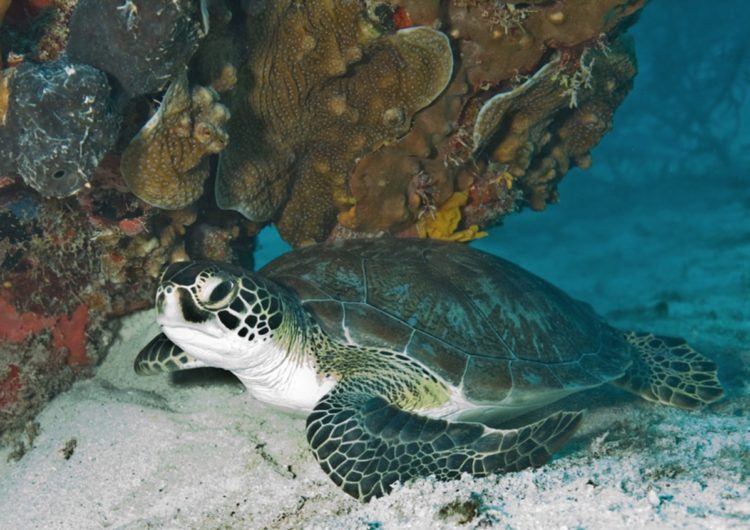 Green sea turtles have proved to be more prolific than expected in the waters being dredged offshore of the mouth of the Savannah River. Credit: seaturtle-world.com

The Savannah Harbor deepening project is killing a few more protected fish and turtles than expected. A new federal report says the higher death rates are acceptable, in part because this may mean more of these sea creatures are in the area than were expected. 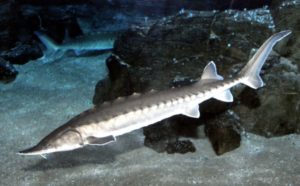 The number of Atlantic sturgeon killed during the dredging of the Savannah Harbor channel has exceeded expectations. Credit: otlibrary.com

The number of Atlantic sturgeon and green sea turtles killed, or captured alive, since dredging started in 2015 may appear to be statistically insignificant – numbering the single digits. But the numbers are high enough to have triggered a consultation under the federal Endangered Species Act, resulting in an increase in the permitted taking of creatures.

Both species are slow to mature and, therefore, slow to reproduce in numbers sufficient to recover from their status as threatened or endangered species.

Sturgeon are classified as threatened or endangered, depending on their birthplace. The fish are an ancient species, at least 70 million years old and the largest, longest-lived fish that reproduces in North America, according to a report by Yale University. The new federal report says Georgia’s sturgeon population was fished to near-extinction by the late 1890s. The females are about 29 years old before they have produced half of their lifetime egg allotment; that’s up to 10 times longer than other bony fish species.

The threatened green sea turtles are the world’s largest species of hard-shelled sea turtles and can reach a weight of 350 pounds, according to the federal report. Juvenile sea turtles tend to be wide-ranging travelers, but by adulthood tend to forage within their native rookeries. These turtles take 20 to 50 years to reach sexual maturity.

The new federal report is positive the harbor dredging operation doesn’t present any dangers greater than those the creatures already face. According to the report’s cover letter:

The review process that resulted in the report began when the U.S. Army Corps of Engineers noticed the number of sturgeon and green turtles caught by dredgers exceeded the permitted number. The final report, completed by the National Marine Fisheries Service, was dated Oct. 13 and released Oct. 27.

On Jan. 24, the NMFS received a request from the corps to increase the number of Atlantic sturgeon and green sea turtles that could be taken during the dredging of the entrance to the Savannah channel.

Research completed before the dredging started estimated that four Atlantic sturgeon would be killed during the entire dredging operation that is to conclude in 2018. The actual number killed was five, during the first two seasons of dredging that was conducted from 2015 into 2017.

“Lethal takes are an unfortunate occurrence during dredging operations,” Erik Blechinger, the corps’ deputy district engineer for planning, programs and project management in Savannah, said in a statement.

“We require our contractors to perform their work in certain ways to minimize those takes, but some takes still occur,” Blechinger said. “The Corps of Engineers takes great care to minimize the number of lethal takes and have successfully relocated many turtles and fish away from dredges.” 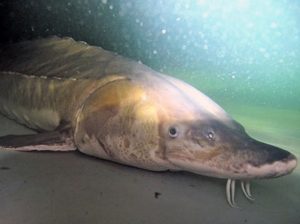 A new federal report grants more time for construction of a fish passage to be built near Augusta around a dam that prevents shortnose sturgeon from reaching historic spawning grounds about 20 miles upriver from the dam. Credit: fws.gov

In its Jan. 24 letter, the corps asked for the limit to be increased. The NMWS service supported the request after citing various issues concerning sturgeon and a number of threats to the fish that are unrelated to the dredging operation. The limits for Atlantic sturgeon changed from four lethal and 23 non-lethal takes to 20 lethal and 195 non-lethal takes, according to a statement that accompanied the report.

Actually, the NMWS considered the impact of dredging on Atlantic sturgeon that have migrated to the Savannah area from five different geographic regions, known by the technical name of distinct population segments. Sturgeon from four of these DPS’ are listed as endangered – Chesapeake Bay, New York Bight, Carolina, and South Atlantic. Atlantic sturgeon from the fifth region are listed as threatened – Gulf of Maine. In each case, the report’s operative language observes:

Green sea turtles were not part of the original planning for dredging operations of the Savannah channel. At the time, the turtles had not been encountered in the area and therefore were not considered at risk. By 2013, when another review was conducted, green sea turtles had been discovered near Brunswick and were added as a potential concern of the Savannah Harbor deepening project, according to the report. 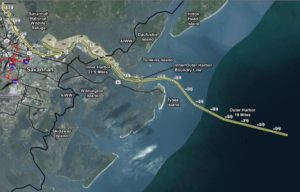 The current dredging operation is underway in the ocean off Tybee Island. The next phase calls for dredges to move into the Savannah River. Credit: National Marine Fisheries Service

The expectation was for three green turtles to be killed by dredging of the channel entrance. Three live green sea turtles were expected to be captured by a trawling operation intended to remove Atlantic Sturgeon and green sea turtles from the path of the dredgers.

However, five green sea turtles were killed in the dredging operation and two were recovered live, but injured.

The injured turtles were taken to the Jekyll Island Rehabilitation Center and released after completing a full recovery, according to the report. NMWS researchers make it clear that survival is extremely rare after a critter has been caught up by a dredger: 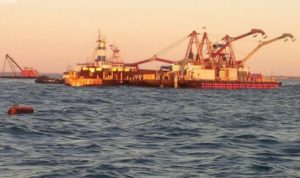 The dredging operation in the ship channel off the Savannah River has involved a spider barge with dredge Alaska loading material onto scowls for disposal in EPA-approved sites. Credit: U.S. Army Corps of Engineers via dredgingtoday.co

The shortnose sturgeon is a concern in the dredging operation because of a fish passage that was to be built near Augusta, at the New Savannah Bluff Lock and Dam. The dam prevents sturgeon from reaching their historic spawning areas at the Augusta Shoals, located about mile miles farther upstream from the dam.

The original dredging plan called for the passage to be built before or concurrent with the completion of the dredging of the Savannah Inner Harbor. That project was derailed when Congress passed in December 2016 the Water Infrastructure Improvements for the Nation Act. The law removed the dam from federal purview.

The report set new criteria for the project.

Construction of the fish passage is to begin before January 2021 and be complete within three years. Bypasses for the sturgeon are to be in place during the construction period. Any additional land that’s needed to build the fish passage or provide an access road to it is to be purchased by the corps. 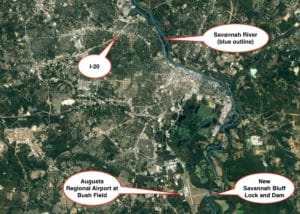 The New Savannah Dam and Lock is located about 14 miles down river of the site where I-20 crosses above the Savannah River. File/Credit: Google Earth, David Pendered