Blueberries, grapes and citrus fruits from certain South American countries are to arrive on the docks of Savannah starting Sept. 1 under a pilot program that aims to treat for pests with cold temperatures rather than methods such as fumigation. 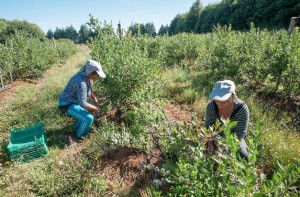 A USDA pilot program will enable blueberries and other produce grown in South America to be imported through the Savannah port after a pest treatment involving cold temperatures before and during transport. Credit: remsberg.com

The shipments are to begin under a USDA-approved pilot program. The treatment method already is used in states including Florida and California, according to trade publications. In Savannah, the program could bolster the port’s role as a leading way station for food entering and leaving the country.

“South American fresh fruit destined to the Southeast market has traditionally been shipped to Northern U.S. ports,” Curtis Foltz, executive director of the Georgia Ports Authority, said in a statement. “Delivery to Savannah means fruits won’t have to be trucked as far to reach Southeastern markets, allowing fresher offerings for stores and longer shelf life for consumers.”

Traditional shipping patterns call for South American produce to be delivered to ports in the northeast. There, it is treated for pests and shipped to markets as distant as south Florida.

The pilot program for Savannah calls for produce from certain South American countries to be treated with cold temperatures before and during transport to the U.S.

According to the statement released by the ports authority:

If the program works as envisioned, with the cold temperature eliminating pests, the program could replace traditional pest treatment approaches such as fumigation. This is the idea, as reported in the trade publication marinelink.com:

The U.S. does not hesitate to require fumigation to prevent pests from entering the country via fruit shipments, according to a report in the trade publication thepacker.com.

In January, the USDA required blueberries from Chile to be fumigated after multiple finds of the European grapevine moth were discovered. Initially, the produce had to be fumigated in the field, a rule that created huge disruptions in the production process. The USDA later determined the produce could be fumigated at ports in Elizabeth, N.J.; Long Beach, Calif.; Miami, Fla.; Wilmington, Del.; and Philadelphia.

The USDA has determined that Chilean blueberries arriving in cold storage and treated with methyl bromide and stored at 40 degrees for three hours will mitigate the moth, according to the report.

Florida recently began testing a cold treatment program similar to the one to be tested at Savannah.

Florida began in late 2013 by allowing grapes and blueberries from Peru and Uruguay. Florida intends to ask the USDA to expand the list of permitted produce and countries of origin if the pilot program is deemed a success, according to a statement to customers released by Customized Brokers.

The Savannah program is to be tested for at least a year. A USDA administrator indicated hope that the program will be successful.

“We will work closely with the Georgia Port Authority and Customs and Border Protection over the next year to evaluate the application of cold treatment and monitor its progress,” Osama El-Lissy, a deputy administrator in USDA’s Animal and Plant Health Inspection Service, said in a statement. “Bringing cold treatment to the Port of Savannah is just one example of USDA’s commitment to facilitating trade while protecting American agriculture.”