The SCLC is adding its voice to the call for Georgia to install a statue of the Rev. Martin Luther King, Jr. at the State Capitol, on the site left vacant by the removal of a statue of Tom Watson. 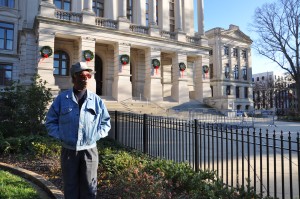 The SCLC will announce Friday its support of a bill filed in December 2013 by state Rep. Tyrone Brooks (D-Atlanta) to place a statue of the Rev. Martin Luther King, Jr. at the Georgia State Capitol. Credit: Donita Pendered

Friday at 11 a.m., four leaders of the Southern Christian Leadership Conference are slated to deliver this message on the first floor of the Capitol. The Rev. Joseph Lowery, an SCLC president emeritus, expects to attend if his health permits.

“We think it’s the right thing to do,” SCLC CEO Charles Steele, Jr. said Thursday. “Time is of the essence because of the imagery Dr. King can project 50 years after the March on Washington, and the anniversary of the 1964 Voting Rights Bill.”

The idea of erecting a monument to King on the capitol grounds is pending before the General Assembly in the form of House Bill 706. The bill was introduced in December by Rep. Tyrone Brooks (D-Atlanta), a lifelong civil rights worker who worked with the SCLC when he was a young man.

“I’m very pleased and happy that my mentors at SCLC, where I was raised, are going to hold a news conference and embrace House Bill 706, which will bring a statue of Dr. Martin Luther King, Jr. to the Georgia State Capitol,” Brooks said.

Steele said the SCLC will call for a King statue to be erected on the same spot where the statue of Tom Watson once stood. The Watson monument was removed in October at the behest of Gov. Nathan Deal and placed across Washington Street in a gated park that is becoming a statuary garden.

Brooks’ bill does not specify a location for a King statue, so long as the monument is erected on the frontage of the capitol, along Washington Street.

Steele emphasized that the King statue would further the SCLC’s renewal of its poor people’s campaign. King started the campaign in 1968 to call for economic and human rights for the poor. 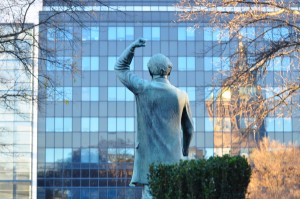 The statue of Tom Watson still faces west, toward the Fulton County courthouse, from its new site in a park across Washington Street from the Georgia State Capitol. File/Credit: Donita Pendered

“What we’re saying is poor people have no organization to advocate for them; we’re going to continue what Dr. King started prior to his assassination,” Steele said.

“We’re talking about people hurting,” Steele said. “Dr. King saw the impoverishment of young people … not having anything to eat … not receiving attention from anyone.”

In modern times, three types of poverty have taken root across the country, Steele said.

“The working poor, the poor, and the po’,” Steele said, going on to explain the origin of his three categories.

The proposed statue of King is one of two monuments proposed for the capitol’s frontage. State Rep. Greg Morris (R-Vidalia) has dropped HB 702, which calls for a monument of the Ten Commandments to be located at the old Watson site.