By Maria Saporta and Amy Wenk
Published in the Atlanta Business Chronicle on Feb. 6, 2015

The prospective buyer of Underground Atlanta envisions developing about 1,000 new residential units as part of his firm’s redevelopment plans — including a new high-rise residential tower on Peachtree Street.

T. Scott Smith, CEO of WRS Inc., which has a contract to buy the 12 acres from the city of Atlanta for $25.75 million, has submitted the preliminary site plan of the project to the city. Smith said when completed, WRS and its development partners will invest between $150 million to $200 million to redevelop Underground.

Even though Smith said it is still early, the site plan provides an indication of how WRS and its future partners intend to redevelop the site.

The tower on Peachtree and Wall streets could be “a student or multi-family high rise with retail on the bottom,” said Smith, whose expertise historically has been in retail developments.

“It’s going to be up to other developers to do the residential,” Smith said in a telephone conversation with Atlanta Business Chronicle on Feb. 3 when he provided a detailed analysis of the site plan and the current status of the project. “We have not picked anyone. We have been in communications with several, and the interest looks very good.”

When asked how tall the high-rise would be, Smith said that WRS is conducting engineering studies to determine “what size load” the development pads on the site can support. 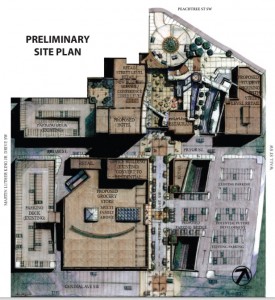 The property is complex because Smith will primarily be developing new buildings above ground without disturbing the historic integrity of Underground. But the above-ground portion of the property really is like a second floor of the city. (Underground was formed in the late 1800s when Atlanta built raised streets to cross over the traffic-stopping train tracks at the center of the city.)

One of the most-highly talked about amenities of the Underground redevelopment will be Smith’s commitment to put a major grocery store along Upper Alabama Street between Central Avenue and almost to Pryor Street.

Smith said the plan is to have a grocery store of about 65,000 square feet (that could vary between 50,000 and 70,000 once he finishes negotiating the deal) at street level, and then put a multi-family development above.

“We will not have a discount store there,” Smith reiterated, even though he stopped short of identifying which grocer he has been talking to.

Luring a grocery store downtown could be challenging. But if a deal gets done, it could be a catalyst both for the overall redevelopment of Underground and spark revitalization around the Five Points MARTA station, said John Bemis, Atlanta retail market leader for real estate services giant Jones Lang LaSalle Inc.

“A grocery store could be one factor in driving permanent residents to the downtown area and would have a very positive impact on downtown in the long run,” Bemis said.

Typically, retail development follows rooftops, or dense areas of population. But with this project, the grocery store could be built first or simultaneously with some residential units. Ultimately, the amenity may spark more interest from residential developers.

The grocer “could be an enticement for a residential developer and could lead to higher rental rates,” Bemis said.

Publix Super Markets Inc. appears to be a front-runner to lease the space, although Scott said it was too early to name potential tenants and that there has yet to be a lease signed or a letter of intent.

Smith said he may be interested in luring back former Underground restaurants, such as Dante’s Down the Hatch, once an Atlanta institution known for its fondue and crocodiles.

“I’d be glad to talk to him,” said former owner Dante Stephensen, who first opened Down the Hatch at Underground in 1970. He later opened a second location in Buckhead that closed in the summer of 2013. “I’m interested in downtown becoming a healthy place again.”

Stephenson said his former restaurant at Underground is mostly intact and it could be reopened, but how easy that would be “remains to be seen,” he said.

A third residential tower, at the corner of Pryor and Upper Alabama, currently is slated to be a hotel — but Smith said that also could change depending on market studies and demand.

“I’m 100 percent sure we will be putting livable spaces there. We will be catering to multi-family and students.”

Smith said the plan is for the 1,000 residential units to be apartments, but that a development partner would have final say.

The site plan also calls for a new “parking bridge” to be built over the MARTA tracks to connect the grocery store with an existing parking lot that Smith does not own. The site plan does identify that parking lot as “potential future development.”

When asked whether WRS had interest in that property, Smith said his goal was to make sure there is as much residential density in the area as possible.

“We want to build a community down there,” he said.

In the meantime, Smith said that there is not another full grocery store within 1.5 miles of that location, and some people will be wanting to drive there. “We need to make parking convenient — a walk over the bridge,” he said.

To make that connection, WRS will have to build over the existing MARTA tracks. It also is talking to the state about shoppers being able to park in that lot. It is the only undeveloped piece of property that separates Underground from Georgia State University.

Smith insisted that the preliminary site plan is still a work in progress.

“There are a zillion different components going on,” said Smith, adding that the concept plan was one of the initial milestones required as part of the city’s contract. Smith said he expects to close the deal by late summer and for construction to start by the second quarter of 2016.

Since announcing his intention to buy Underground on Dec. 17, Smith says he hasn’t had any second thoughts about taking on such an ambitious project in the heart of Atlanta.

“Nope,” Smith responded without hesitation. “This is a project that WRS is really looking forward to completing.”

Smith said WRS has developed larger retail projects — some as large as a half million square feet. Underground’s total retail will be about 250,000 to 260,000. It also is not the most expensive deal WRS has ever developed with other partners.

But Smith acknowledged that Underground is the “highest-profile piece of property we’ve ever done.”

For Smith, there is no turning back.

“I guess a lot of people think I’m a little naive,” said Smith, who has a hard time containing his enthusiasm about the future of the heart of Atlanta at its zero mile marker. “This is the most exciting piece of property we will have ever developed.”

Previous Article
The Namesake
Next Article
Is choosing to vaccinate or not vaccinate a personal choice?