Here’s the thing about something like the Screen Actors Guild Awards, which were handed out Sunday. Do you review the show itself or do you review the results and what they might bode for the Oscars, which happen on March 27?

Well, why not a bit of both…

The SAG Awards matter as an Academy Award prognosticator mostly because the Academy’s largest branch, by far, is comprised of actors. Sure, it’s nice if the Best Sound Editing folks like you (or, as Sally Field so famously said when she won her second Best Actress prize for “Places in the Heart” decades ago, “You really like me”). But the bottom line is numbers. 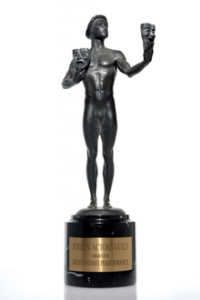 The Winner: Troy Kotsur (“CODA”) who not only became the first deaf actor ever to win a SAG, but also jumped to the head of the Oscar race. The cynical response is that Hollywood has found its new minority. The non-cynical response is that Kotsur is quite good. I’m thinking Oscar should go ahead and line up someone who’s an expert at translating sign language.

The Winner: Ariana Debose (“West Side Story”). In any other year, she’d have the minority slot sewn up (she describes herself as an “Afro-Latina queer woman of color”).  She is also, like Kotsur, really good. She’s been an early favorite since the Oscar nominees were announced. Her SAG win just continues the momentum.

The Winner: Jessica Chastain (“The Eyes of Tammy Faye”). Here’s a win that actually matters. Oscar’s Best Actress race hasn’t really had a clear front-runner. “Tammy Faye” probably isn’t Chastain’s finest work, but she’s been doing fine work for years. And she’s always been an outspoken advocate for the treatment of women in the industry. The Winner: Will Smith (“King Richard”). He’s been sort of neck and neck with Cumberbatch, so a win here has weight. Oscar-winning weight. Plus, sitting at his table was a real heavyweight – none other than Venus Williams herself. Now that’s a photo opp that Oscar would find very hard to resist.

The Winner: “CODA.” The title stands for children of deaf adults. The movie is genuinely feel-good. The major Oscar competition – this is SAG’s equivalent of Best Picture – is “The Power of the Dog” which, oddly, wasn’t even nominated.  Your guess is as good as mine. Probably better.

And the show itself? After a two-year pandemic-imposed moratorium (more or less) on awards shows, it was somewhat breathtaking to be reminded just how gaudily self-infatuated Hollywood is. Not that there weren’t the usual political statements (Ukraine edged out trans-gender rights), but the sheer show-biz glitz was a bit startling, if only because we haven’t seen it in a while.

If memory serves, she was talking about the woman’s dress, not the Ukraine.

Previous Article
Spring is in the air as Atlanta reopens with relaxed COVID restrictions
Next Article
It was the country’s first, but it didn’t last