The sea turtle nesting season is off to a slow start this year along Georgia’s coast and other southern beaches. 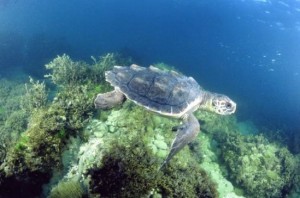 Loggerhead turtles, like the one, crawl ashore to lay eggs in nests along the southeastern coast. Credit: noaa.gov

The Georgia Department of Natural Resources reports that the first loggerhead nest to be found in Georgia this year was located May 13 on Wassaw Island, off the coast of Savannah. May 5 is the average arrival of the first female to lay eggs. Last year the first nest was discovered April 25 on Cumberland Island.

North Carolina beaches evidently are a little more inviting this summer. The first loggerhead nest to be spotted this year in the Tar Heel State was found May 12 on Oak Island, near Wilmington, according to seaturtle.org.

Like Georgia, other states are reporting sluggish starts to the sea turtle nesting season. 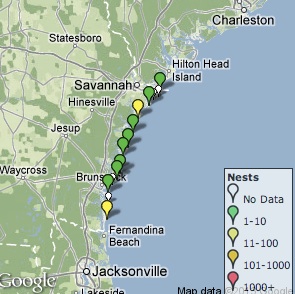 Down in Alabama, the first sea turtle nest of the season was spotted May 20 along a stretch of private beach west of Gulf Shores.

And along Florida’s very long waterfront, the season is slightly delayed because cooler water temperatures are keeping the turtles at sea, according to a group named Turtle Time that watches the coastline near Fort Myers. The state’s first turtle nest was spotted April 20 in West Palm Beach, and the first nests on the state’s west coast were spotted April 28 on Captiva Island.

Georgia officials are not raising concerns about the comparatively late start to the nesting seasons. Record totals have been recorded in Georgia over the past three summers, including a 24-year high of 2,241 nests located in 2012.

Mark Dodd, who coordinates the sea turtle program for the Georgia DNR, said the start of the nesting season is no predication of how the season will go.

“There’s not a correlation between when nesting starts and how high nesting numbers will be,” Dodd said in a statement. “No need to panic.” 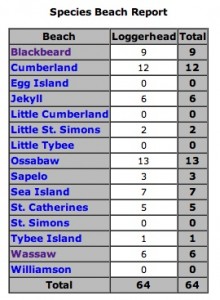 All the sea turtle nests found along Georgia’s coastline, to date, were made by loggerhead turtles. Credit: seaturtle.org

This year, other loggerhead nests were discovered May 15 on St. Catherines and Ossabaw islands. DNR views those discoveries as evidence that the sea turtle season is beginning.

So far this year, 64 turtle nests have been discovered and all have been loggerhead, according to seaturtle.org. The website provides some very detailed information about turtles and other species around the world.

For example, the snapshot of Georgia’s sea turtle nests so far this year shows: