One of the biggest challenges facing the Greater Seattle region is “Seattle Nice.”

That’s what Phil Bussey, president of the Greater Seattle Chamber of Commerce told a delegation of about 110 metro Atlanta leaders visiting the region on the annual LINK trip.

“We can not make a decision until everybody is happy,” Bussey said. “It took us 13 years to build a third runway.” (A later speaker actually said it took 19 years).

In talking to the Atlanta group, Bussey touted all the attributes of the Seattle region. It’s an area that values innovation — from Bill Boeing in the early part of the last century to Bill Gates 75 years later.

It’s an area that values the natural environment and enjoys a green, healthy lifestyle.

And it’s an area focused on the global community with strong ties to the Pacific.

When businesses were asked about the top benefits that Seattle has to offer, the No. 1 answer — 60 percent — answered “quality of life” and the “environment.”

So Bussey said the region seeks to keep its quality of life so that it will keep its skilled workforce and high tech jobs in the community.

When asked about the areas challenges, Bussey mentioned that the business community is in a current standstill with Seattle Mayor Mike McGinn, who was elected in November, 2009. 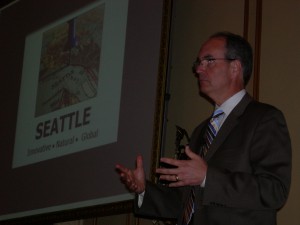 Business, community and state leaders for nearly a decade have wanted to tear down the earthquake-damaged Alaskan Way Viaduct. A couple of years ago, there appeared to be consensus between city and state leaders to replace it with a tunnel that would open and unobstructed vista to Seattle’s waterfront.

But Mayor McGinn, a former state chairman of the Sierra Club, is steadfastly against the tunnel, preferring a surface boulevard that would accommodate cyclists and transit.

“The biggest challenge we face right now is getting this infrastructure issue resolved,” Bussey said, adding that he personally views the tunnel project as a legacy he can leave his grandchildren.

Stating that folks from Seattle seek consensus by playing “Seattle Nice,” Bussey said that approach hasn’t worked with the mayor.

“We’ve tried,” Bussey said. “Thus far there has been no compromise.”

McGinn, who is supposed to be introduced by Mayor Kasim Reed, will be addressing the Atlanta delegation late Wednesday evening (after 11 p.m. Atlanta time) at Canlis Restaurant