Atlanta Business Chronicle’s Maria Saporta visited Seattle May 4-7 with local executives and government officials as part of the Atlanta Regional Commission’s LINK trip. LINK stands for Leadership, Involvement, Networking, Knowledge. The trip let Atlanta leaders see how Seattle has evolved since LINK visited the city more than a decade ago, reflect on how the Atlanta region has developed, and compare the two leading U.S. cities.

So when a delegation of metro Atlanta leaders went to Seattle on May 4 to May 7 for the annual LINK trip, a small group took a private tour of Qwest Field to understand the funding model of how it was built, how it fit in with the community and what Blank found appealing about the stadium.

Among the Atlantans on the trip was engineer Tim Lowe, chairman of the Georgia World Congress Center Authority, which is working with the Atlanta Falcons on its future plans. 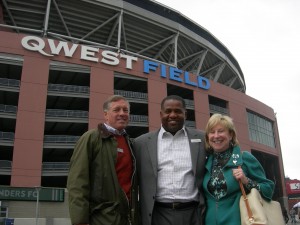 Tim Lowe, chairman of the Georgia World Congress Center Authority; Ceasar Mitchell, president of the Atlanta City Council; and Penny McPhee, president of the Arthur M. Blank Family Foundation, stand in front of Qwest Field in Seattle. Arthur Blank has said his vision of an open air stadium in Atlanta would be similar to Qwest Field. (Photos by Maria Saporta)

“This is the second visit to Seattle Seahawks’ Qwest Field,” Lowe said. “Each time I have been impressed with the iconic view of downtown Seattle. Whether this model is suitable for Atlanta remains to be seen.”

The Georgia World Congress Center Authority in February approved a master plan that showed a number of alternatives for the Atlanta Falcons, including a renovated Georgia Dome and a new open-air stadium. The authority also voted to enter into discussions with the Falcons to work on an understanding that would serve both parties. The negotiations are expected to continue throughout the year. 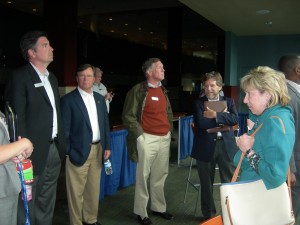 As for Qwest Field, the $430 million stadium was designed so that most of those in the stands have dramatic views of Seattle’s downtown skyline. The stadium, designed by architectural firm Ellerbe Becket (now AECOM), seats 68,536 fans.

About 70 percent of the seats are covered by its roofline, according to Ann Kawasaki, executive director of the Washington State Public Stadium Authority.

Voters approved the open-air stadium in a referendum that called for up to $300 million in public funds going toward the project. 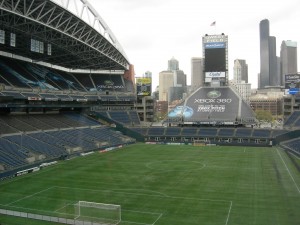 The view of downtown Seattle from Qwest Field. About 70 percent of the seats at Qwest Field are covered, but it is an open air stadium

The vote was a show of support for Paul Allen, Microsoft Corp.’s co-founder and Seattle billionaire, who pledged to buy the Seattle Seahawks if a new open-air stadium were built. Allen’s development company — First & Goal — agreed to cover the $130 million balance of the construction costs and any possible overruns. Qwest Field replaced the former Kingdome, demolished in 2000 and similar in some ways to the Georgia Dome.

A new open-air stadium for the Atlanta Falcons likely would be in addition to the Georgia Dome. Like Seattle, the funding model also would be a public-private partnership with a portion of hotel-motel taxes going toward building the facility. The public funding piece is expected to be about $300 million.

But a new stadium for the Atlanta Falcons is expected to be nearly double the cost of Qwest Field — probably between $700 million and $800 million. Blank and the Falcons have said they will be a full partner in helping pay for the stadium.

A few other differences: Seattle’s Qwest Field has limited surface parking for tailgating opportunities. A 1,000-space surface lot is much less than what the Falcons have said they would like to have around their new stadium. But tailgating is not a big part of Seattle’s game day experience because the consumption of alcohol is not allowed. In all, there are nearly 5,900 parking spaces in nearby garages and lots, and it usually costs about $35 to $40 to park on game days. 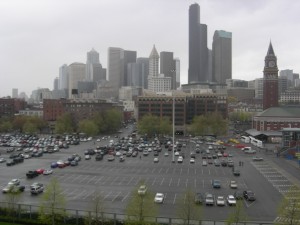 Also, some critics of a new Falcons stadium have questioned the rationale behind building a facility that would only be used eight to 10 days a year.
But Susan Darrington, vice president of facility operations and services for Qwest Field, said that there are activities and events about half the days of the year.

The city’s major league soccer team — the Sounders — also uses the facility about 30 days a year.

Interestingly enough, despite being an open-air stadium, it has artificial grass because the field gets limited sun. Natural grass, however, is required to host major international soccer games, such as the World Cup, according to Penny McPhee, president of the Arthur M. Blank Family Foundation, who was on the LINK trip’s Qwest Field tour.

And Seattle has not been awarded a Super Bowl despite having built a new facility. The impression in Atlanta is that it would not be chosen by the NFL to host another Super Bowl unless it built a new stadium or had an extensive overhaul of the Georgia Dome.

Qwest Field also has had to work closely with three neighborhoods that surround the facility. The $430 million budget included $10 million that went to “mitigation” of the negative impact it would have on the community. A South Downtown Foundation of neighborhood residents was established, and it made $6.1 million in grants in the community, Kawasaki said.

When the Georgia Dome was built, there also was a $10 million pledge made to the community, but Atlanta City Council President Ceasar Mitchell, who was on the tour, said that it is not clear what happened to the money.

McPhee, however, said that Blank and the Falcons want to work with the community to minimize the impact a new stadium would have on the area.

Previous Article
While only some of us use transit, all of us NEED transit
Next Article
Atlanta airport concessions contracts for food, beverage to define Southern cuisine