Thanks to a longstanding partnership between Park Pride and the Robert W. Woodruff Foundation, Atlanta is creating a more equitable park system that will better serve the city’s lower-income communities.

It’s part of an ongoing effort at Park Pride to focus on equity and to make sure every neighborhood in the city has thriving parks — especially in communities with limited resources. The nonprofit group works with Friends of Parks organizations to help develop this vision. 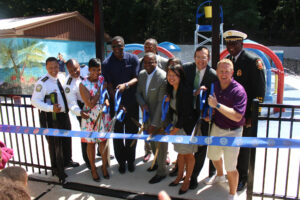 With the support of a Park Pride Legacy Grant in 2016, Adams Park celebrated a brand-new splash pad and renovations to the pool – just in time for summer (Special: Park Pride)

As originally designed, Park Pride used the Woodruff dollars to invest in Atlanta’s neighborhood parks as long as the community identified public or private matching money to make improvements.

After the murder of George Floyd in 2020, the heightened awareness of racial inequities throughout our society compelled Park Pride to go beyond its prior efforts to invest in lower income communities. The requirement for neighborhoods to provide matching dollars only reinforced already existing inequities and created a power imbalance that favored some communities over others.

So, with support from the Woodruff Foundation, Park Pride waived the requirement for a match in Atlanta’s lower-income census tracts. At least 30 percent of the Woodruff dollars would be set aside for those communities.

“Since we made that change, we have seen the creation of 10 new Friends of Park groups that did not exist before,” said Michael Halicki, Park Pride’s executive director.  “As we have lowered the barriers to entry over the past two years, we have found that community leaders are accessing resources.”

Park Pride serves as the fiscal sponsor and back-office administrator for smaller Friends of Parks groups throughout the city – helping communities build capacity to nurture their parks.

“Our sweet spot is community-led park projects,” Halicki said. “The legacy grants program has been the catalyst for change within our organization. Not only has Woodruff increased its support over time, but it has also inspired the Home Depot Foundation and other funders to support our work.”

In all, the Foundation has made $12 million in grants to Park Pride, which has then invested those dollars in 101 separate grants. Park Pride will announce another 15 grants totaling $1.4 million to community parks within the next month. 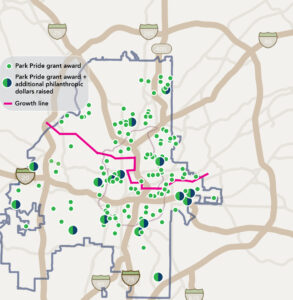 The map shows the distribution of grants awarded within the City of Atlanta from 2004 to the present. The “growth line” (first introduced as part of Atlanta City Design, 2017) shows areas of strong or stable growth (above the growth line) and those areas of low or no growth (below the line).

Park Pride coordinates with the City of Atlanta when planning park improvements.

One recent example is Mozley Park in west Atlanta, which had a ribbon-cutting on a dog park and other improvements on Dec. 9. At the ground-breaking earlier this year, Mayor Keisha Lance Bottoms said her mother remembered when Mozley Park was segregated, and she peered through a fence to watch white children swimming in the pool. To show how Atlanta has changed, now her daughter was Atlanta’s mayor.

“We did a visioning plan for Mozley Park in 2019 before we removed the matching grant requirement,” Halicki said. “The city restored the playground, and we leveraged additional resources to build out an exercise fitness trail.”

That’s only one example of how public-private partnerships have helped improve Atlanta’s community parks. Once a community has come up with a vision and design for a park, the City of Atlanta must accept the improvements and agree to maintain those investments.

This should help Atlanta improve its national ParkScore, ranked by the Trust for Public Land. In the most recent ParkScore ranking, Atlanta went from 40th among the top 100 cities to 49th – largely because TPL included equity as part of its ranking. Halicki is optimistic Atlanta’s ParkScore rating will improve in future rankings.

Also, the City of Atlanta has just adopted a new strategic plan for parks – Activate ATL – and Park Pride helped coordinate the public engagement for the strategic plan thanks to a separate $250,000 grant from the Woodruff Foundation.

The plan has several priorities, including:

“It really feels like it’s a new day for public-private partnerships for parks in Atlanta,” said Halicki, who has been with Park Pride for eight years. “I feel we are in a good place to achieve greater impact.”