The Segway, a feature of downtown Atlanta, protected by federal trade ruling

The maker of Atlanta’s beloved Segways have just received an ounce of prevention from the federal government, which shut down the import of devices built with technology stolen from Segway.

The federal prohibition came in the form of a ban on the import of “certain personal transporters.”

The ban was aimed at hoverboards, those two-wheeled devices that proved to be the hottest gift of the 2015 Christmas season. Within days, they were denounced for bursting into flames while in use or charging, and for depositing adult riders on the ground in most injurious of ways.

Segway’s patent holders filed a complaint in 2014 claiming that the hoverboards were based on technology stolen from Segway. Segway is privately owned.

Hoverboards caught on the way Segways never could. Price is the reason. A hoverboard costs a few hundred dollars and provides a level of service similar to a Segway. A Segway costs from $6,000 to $8,000 for a basic unit, according to segwayforsale.net.

The government determined the hoverboards were enabled by a two-wheel balancing technology that Chinese engineers had adapted from technology patented by the designers of the Segway, according to the notice posted on the Federal Register March 16 by the U.S. International Trade Commission.

It turned out, according to media reports, that Chinese engineers mastered the technology to balance a hoverboard through a process of shared technology. Various engineers adapted each other’s improvements, all with an eye to lowering production costs. This reason Chinese hoverboards cost about $1,000 less than boards made in other countries.

The problem was that the cheaper versions hadn’t passed safety tests and tended to burst into flame. 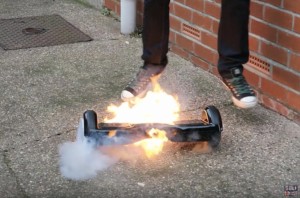 Cheaper batteries lowered the price of hoverboards, but created the danger of the boards bursting into flames. Credit: technewsdb.com

Segways have been common in downtown Atlanta for more than a decade. Segway tours are popular, and various organizations use Segways to transport their employees.

There was a time, a decade ago, when Mike Dobbins was the Atlanta planning commissioner who described in vivid terms an urban lifestyle where commuters would step off a transit vehicle and complete their last quarter-mile trip on a vehicle such as a shared Segway.

Today’s version of this idea is Atlanta’s program to provide bicycles for riders to pick up at one location and drop off at another.

The federal trade restriction aimed at hoverboards came as Atlanta considering banning them from use by most passengers at Hartsfield Jackson Atlanta International Airport. Major airlines have already banned them from flights.

The proposal was formally considered March 16 by the Transportation Committee of the Atlanta City Council. Committee chair Yolanda Adrean said the measure was duly noted and would be considered at the committee’s March 30 meeting.

Presuming the ban is approved, it would be considered by the full council at its next meeting. That date is April 18, according to the council’s meeting schedule.