Shakespeare and the business model that made his plays must-reads 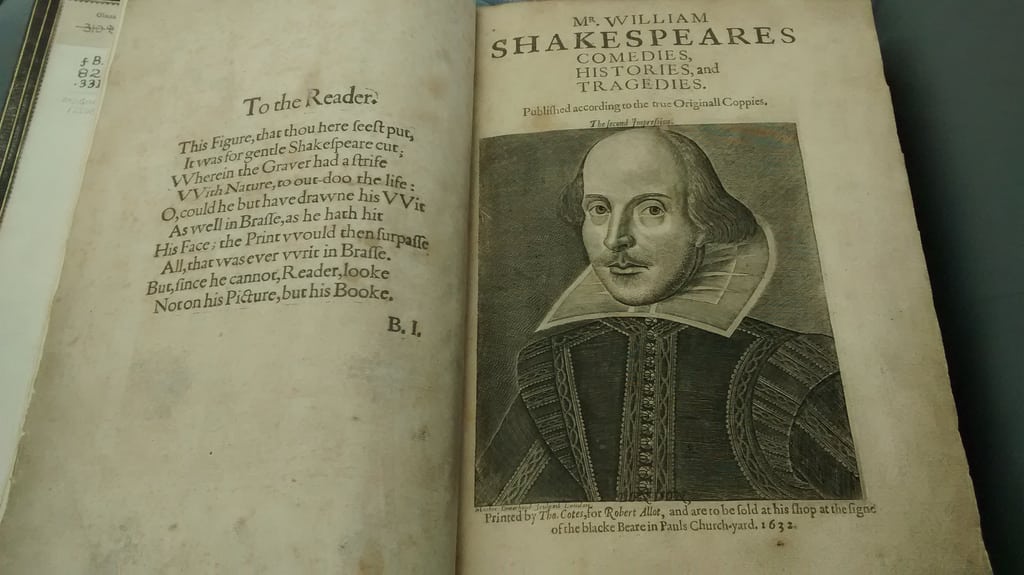 This week, in anticipation of the arrival of Shakespeare’s First Folio in Atlanta, JUSTIN SHAW, a graduate student at Emory University, shares the stories of the first four Shakespeare folios and their place in seventeenth-century culture.

Everyone has a Shakespeare story, whether they know it or not. Some stories begin in that fateful winter of 1623 when actors John Heminge and Henry Condell had the First Folio (the first collected edition of Shakespeare’s plays) printed, or perhaps in 1594, when Titus Andronicus and what we now call Henry VI, Part 2 (Shakespeare’s first theatrical publications) were published in quarto.

This Shakespeare story begins in 1650, with the 30-year-old Edward Dale. Dale was one of many English royalists who immigrated to the Virginia colony in the mid-17th century. Over time, he became rather wealthy and influential. Upon his death in February 1695, he owned a copy of an ever-collectible Shakespeare Folio (though not a First Folio).  According to the Folger Library’s research team, Dale is the first known person to possess a copy of a Shakespeare publication (the Second Folio of Mr. William Shakespeare’s Comedies, Histories, and Tragedies) in the New World.

What is the big deal with the Second Folio (1632), or the Third (1663/4) or Fourth (1685) for that matter? For starters, they tell us about English print culture and help us understand the rise of Shakespeare from a producer of popular entertainment to a literary icon known the world over.

The Second Folio isn’t much different from the First, save for around 1,700 minute textual additions, spelling changes, and new errors. There are also some slightly different variations on the iconic Droeshout engraving (a portrait of Shakespeare that appears on the frontispiece), but that’s it. None of the four folios, I should add, include The Two Noble Kinsmen or Shakespeare’s wildly popular poetry. The key to good marketing is to convince people that new equals better. The appearance of the Second Folio also suggests much about the potential for more profit and notoriety with the new volume.  An unknown graduate student named John Milton was moved to submit what would become his first printed poem – “An Epitaph on the Admirable Dramaticke Poet, W. Shakespeare” – for inclusion in the volume. 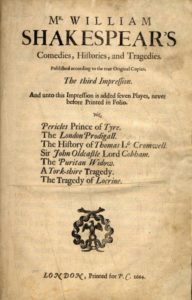 By 1664, the Restoration was in full swing, and the Second Folio faced stiff competition from new editions of comparative volumes from other Renaissance playwrights like Francis Beaumont, John Fletcher, and Ben Jonson, to be precise. Consequently, a number of “new” Shakespeare plays were “discovered,” and the volume’s printers decided to really beef up this edition by adding “seven Playes, never before Printed in Folio.” Printers tacked on these seven plays in about 100 pages to the back of the volume, behind the tragedies, as a sort of appendix, creating the impression that this new Third Folio wasn’t  as “canonical” as the standard 36 carried over from the First and Second Folios. It could also suggest that the printers didn’t know how to properly categorize them.

In 1666, two years after the Third Folio went to print, the city of London went up in flames in a devastating event known as the Great Fire. During an evacuation, many of the booksellers thought it would be a good idea to save their books by storing them in the “impenetrable” cellar of nearby St. Paul’s Cathedral. In under a week, almost 15,000 buildings turned to ash. Like an early modern Titanic, St. Paul’s was also completely destroyed in the flames and with it, many of the books in its cellars and around the churchyard. Most of the Third Folios that remain to this day are only due to those who lived away from the fire and those few who had the resources to carry their big folios out of London to safety. According to a 1990 study by Harold Otness, there were 90 Third Folios in American institutions (compared to about 180 Second Folios), though a full census has never been taken of any of the folios other than the First. (The First Folio, though pricey, isn’t that rare of a book for its period. With some 235 known copies, it may not even be the rarest of the four Folios.) 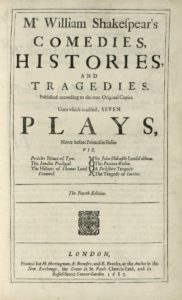 With a great many Third Folios gone from the face of the earth, and London recovering from devastation, it was time for another printing of Shakespeare’s plays. In 1685, four new publishers compiled yet another Folio, basically an updated Third Folio featuring an array of textual revisions and some admittedly sloppy formatting differences. Many believe that the appearance of the Fourth Folio is a product of speed rather than accuracy. For example, if you look closely at the title page, you can see that the “S” in “Plays” is upside down, and there’s a play called Muchado (for Much Ado About Nothing).

On the title page of each Folio, much is the same – the Droeshout engraving, the title, the Ben Jonson poem – you know what you’re going to get when you open a Shakespeare Folio up. Consistency made for profitability. The printers were invested in making money, but also in curating an idea of Shakespeare. The Folios are intentionally organized as literary volumes for reading, contemplation, and display that prove the success of Heminge and Condell’s 1623 attempt to establish theatre as a sustainable and artistic form of literature. While the story of the Second Folio brought the Bard to American shores, it is the iconic First Folio which first experimented with the idea of a literary Shakespeare that continues into the present day and, as Jonson proclaims, “for all time.”

On November 5, Emory University will welcome the traveling exhibition First Folio! The book that gave us Shakespeare. Be sure to visit To the Great Variety of Readers: Publishing Shakespeare, an exhibition of the Second, Third, and Fourth Folios, on display in the Stuart A. Rose Manuscript, Archives, and Rare Book Library through October 28.

Justin Shaw is a Ph.D. student in English literature at Emory University. His research engages issues of race, disease, and disability in early modern literature and culture. Currently, he works as site manager and curator for Shakespeare and the Players, an online archive of Victorian and Edwardian theatrical postcards, and is an Andrew W. Mellon intern for the exhibition The New World in the Age of Shakespeare at Emory’s Michael C. Carlos Museum.

Previous Article
Photo Pick: JapanFest by Kelly Jordan
Next Article
Atlanta’s selection as one of 100 Resilient Cities to help it face unforeseen challenges