It would be easy to joke around and say “The Shape of Water” is like “Mad Men” meets “The Creature From the Black Lagoon” with a “Dr. Strangelove” gloss.

But Guillermo del Toro’s sublime fairy tale romance/Cold War commentary is so much more than that. It’s an utter original and not really what we would expect from the director of such memorable fantasy-tinged horror films like “Pan’s Labyrinth” and “The Devil’s Backbone.”

“The Shape of Water” movie poster

It’s the early ‘60s and the United States is up to its flag-waving neck in a space race with the Russians. Elisa (Sally Hawkins) is a cleaning woman at an icily monolithic lab where a team led by Strickland (Michael Shannon), a brutish government bully, is trying to figure out how to best use something they refer to as The Asset (Doug Jones) in their research.

Said Asset, a scaly amphibious something-or-other captured in South America, is top secret. Except, nothing is secret from Elisa and her fellow charwoman Zelda (Octavia Spencer) who wander the building unacknowledged and unappreciated. As Zelda says, “Some of the best minds in the country pee all over the floor.”

Elisa, by the way, is a mute, but Zelda understands sign language and translates for her. So does Elisa’s lonely neighbor, Giles (Richard Jenkins), a closeted gay man who loves to share his passion for old films. Fittingly, their tiny apartments are over an aging movie palace, the Orpheum, which is currently showing a Hollywood potboiler, “The Story of Ruth.” (For those of us who know our Bible, the Book of Ruth’s most famous verse, “Whither thou goest, I will go” turns out to have a special resonance later in the movie).

Back at the lab, things are getting bleak for The Asset. Strickland wants to dissect him. The Soviets want to steal him. Elisa, however, has begun a shy courtship; she leaves him hardboiled eggs, just like Elliott’s trail of Reese’s Pieces in “E.T.” 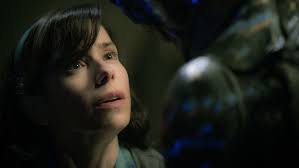 Scene from “The Shape of Water”

A romance of sorts develops, as does Elisa’s determination to rescue him.

“The Shape of Water” unfolds like a wonderstruck B-movie — but with an artist’s expertise. At times, del Toro seems to be emulating Jean-Pierre Jeunet. Elisa recalls Audrey Tautou’s mute gamin in “Amelie” and the slightly surreal production design suggests Jeunet’s “The City of Lost Children.”

But del Toro doesn’t really need to borrow from anyone. His style is peculiarly his own — simultaneously florid and poetic. And almost always unexpected. He gets us laughing with oddball period touches — everything from Mr. Ed to Mr. Magoo to Maynard G. Krebs, “Dobie Gillis’s” stalwart beatnik.

And then he breaks our heart with something as simple as Elisa’s explanation of love: “He sees me for what I am, as I am. He’s happy to see me.”

Frankly, we’re all happy to see Sally Hawkins. This extraordinary Brit has been singularly brilliant in a string of movies, from “Happy-Go-Lucky” and “Blue Jasmine”  (for which she earned an Oscar nomination) to “Made in Dagenham” and this year’s “Maudie.” A very strong ensemble supporting cast helps, but Hawkins is “The Shape of Water’s” heart and soul.

That she and Del Toro somehow found each other is as marvelous as what happens between Elisa and her amphibian soulmate. Sometimes, movies just ask you to go with them.  And sometimes, it’s wonderfully easy (and gratifying) to do just that.

Previous Article
What Do Charity Watchdog Ratings Really Mean?
Next Article
Apparently, while at Fort Mac, he had some time on his hands