Shining a spotlight on our Civil Rights history; hoping to preserve our precious past 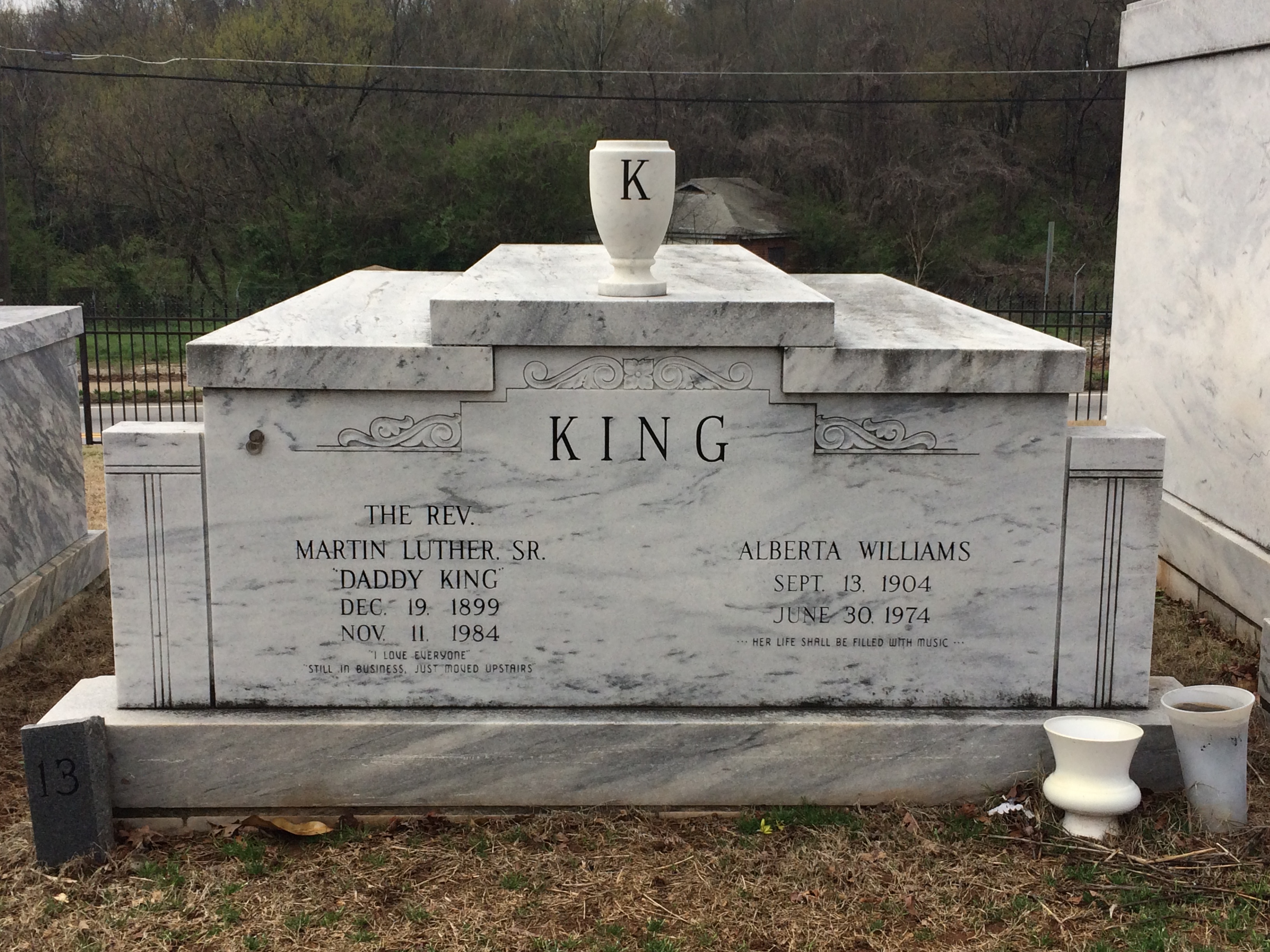 This is the second in a series of columns in Maria’s Metro about Atlanta’s preservation past and present.

Riding on the bus as part of Tom Houck’s Civil Rights Tours Atlanta is sobering.

Whether it is Auburn Avenue or Martin Luther King Jr. Drive, the message is two-fold. These are sacred places. It was here in Atlanta where some of the most significant moments in U.S. history took place – the Civil Rights movement.

But most of the places are now vulnerable of just becoming markers our memory banks. So many buildings and places are in various states of disrepair – suffering from years, even decades, of disinvestment. 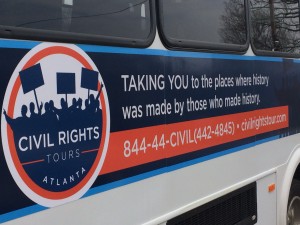 “It’s my life’s work, our nation’s work to keep this history alive for all of us,” Houck said during a preview run of his Civil Rights tour. “Unfortunately it needs a lot of repair.”

Houck arrived in Atlanta in 1966 to work on the voter registration drive being organized by the Southern Christian Leadership Conference. While working with SCLC, Martin Luther King Jr. and Coretta Scott King ended up hiring Houck to serve as their driver.

So when Houck is conducting the tour, he sprinkles his own memories along side the official stories that identify the historic landmarks. And he can’t help lamenting the fact that several places where history was made are in danger of being lost forever. 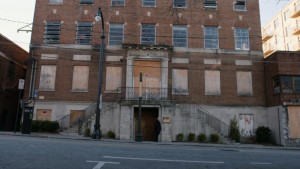 The tour begins on “Sweet Auburn” – coined by John Wesley Dobbs, who was the grandfather of Atlanta’s first African-American mayor – Maynard Jackson. Houck points out the historic Ebenezer Baptist Church, the SCLC headquarters, places where King would go eat barbeque or play pool, the other legacy churches on the corridor – Wheat Street and Big Bethel to name a couple..

“This is a a very historical street,” Houck said. “Much is still blighted unfortunately.”

Then he points to the Butler Street YMCA – once a thriving spot where people would congregate to strategize about Atlanta’s future. The Hungry Club Forum was a place where leaders would go to give major speeches. Now it’s all boarded up. 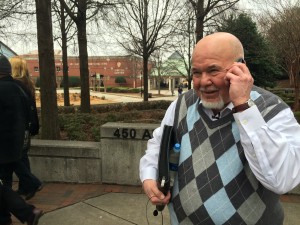 Albert Cooper, a film-maker and photographer, is providing color commentary on the tour.

“In 1956, Forbes Magazine called this the richest black street in America,” Cooper said. Because they were shut out of other areas, black businesses congregated on Auburn Avenue. “Nobody had to go out of this neighborhood for anything that they needed.”

Then Houck brings up one of the sad ironies of the passage of time and place.

“This area became a victim of what we were marching for – integration,” Houck said. “Many folks moved out, and it became blighted over the years.” 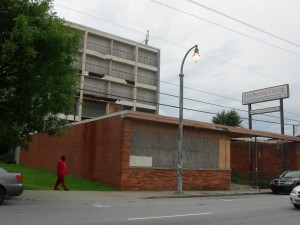 The historic headquarters of Atlanta Life remain boarded up – waiting for a new lease on life. The new Atlanta Streetcar has made the area attractive to developers and new property owners – such as Georgia State University. But the question is whether the historical integrity of the corridor will be respected and preserved.

As the tour heads over the westside near the Atlanta University complex of historically black colleges, the story is much the same.

The tour bus goes by the legacy Paschal’s Motor Lodge and the old Carousel nightclub. 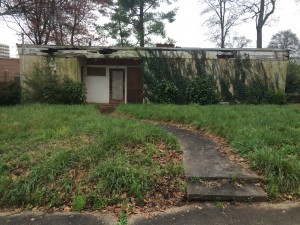 “It was the meeting place for all the Civil Rights leaders,” Cooper said.

“It was the black City Hall,” Houck chimed in.

Today the historic Paschal’s is boarded up and just a skeleton of what it used to be. Only the most courageous dreamers can see the potential of a renovated Paschal’s complex that could become a touchstone for Atlantans and visitors to experience history where it was made.

The tour traveled down Sunset Avenue to see the home where King and his family were living at the time of his assassination in 1968. Several houses along the street have stories to tell. The house where Maynard Jackson lived. The home of Michael Julian Bond’s mother. And so many other houses in dire need of repair. 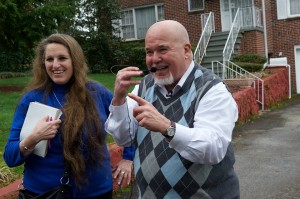 The bus went by the Herndon Home – built by Alonzo Herndon, the son of a slave owner and a slave. Herndon, founder of Atlanta Life, was the first black millionaire in the city.

Just across the street from the Herndon Home was the overgrown modern home of the late Grace Hamilton, the first African-American woman elected to the state legislature. It’s hard to know how long will that house remain standing in its current condition.

The tour continued to Morehouse College and the other universities. One can see where notable Morehouse College President Benjamin E. Mays is buried. Then the bus went by Booker T. Washington High School, the first high school where blacks could attend and receive a high school diploma in Atlanta. 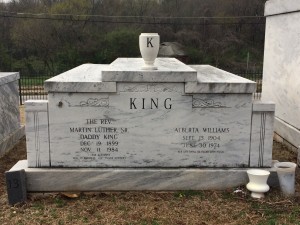 Ron Wilson, an architect who also is providing color commentary, points down a street and said: “That’s where Gladys Knight and Pips lived.”

Houck also takes the tour by South View Cemetery, which is called one of the best kept secrets in the country.

It was King’s first resting place after he was assassinated before being moved to the King Center, where one can see his crypt next to Coretta Scott King’s crypt.

South View, however, is where his mother and father are located. Daddy King’s inscription is poignant: “I love everyone. Still in Business. Just moved upstairs.”

It is also where John Wesley Dobbs and his wife, Irene, are buried. 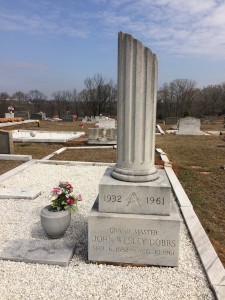 But their grandson, Maynard Jackson, has a spot at the historic Oakland Cemetery overlooking the city’s skyline.

The tour is coming to an end – where it began – at the National Park Service’s Martin Luther King Jr. Historic Site and visitor’s center.

Houck acknowledged that the reason he started the Civil Rights Tour was to raise awareness about the significance of the history that happened in Atlanta and helped change the South, the nation and even the world.

If people are more aware of the historic power these places represent, then there may be a greater incentive to preserve and protect them for future generations to see.

Already so much is gone.

“The last two houses where Martin Luther King lived before he moved to Sunset have been torn down,” Houck said. “It shows we don’t have the appreciation of history that we should.”

At least we can hope that one day soon our city will celebrate and preserve what has made Atlanta such a special place. 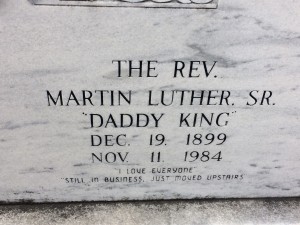 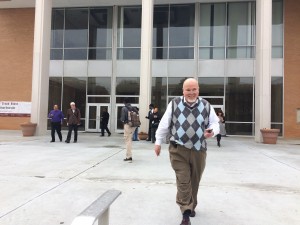 Note to readers: Next week, this column will visit the legacy of the Fox Theatre and the role it has played in Atlanta’s preservation movement.

Previous Article
“Class of ‘65”: The moral guts of a bullied middle child
Next Article
As more people move to the City of Atlanta, having quality parks is key