Should ARC ban developers from its board? Tax groups press the question

The simmering battle over the structure of regional governance got hot at Wednesday’s meeting of the board of the Atlanta Regional Commission. 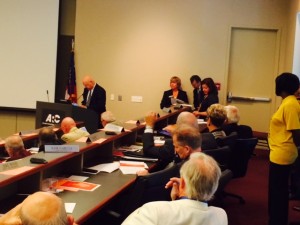 At least nine organizations sent representatives to voice opposition to proposed revisions to the ARC’s bylaws. They want the bylaws to prohibit the ARC from seating on its board developers and others who have an interest in development. The proposal does not do that.

“I have a problem with a person or employer who could benefit” from actions taken by the ARC board serving on the ARC board, said Fayette County Commission Chairman Steve Brown.

If Brown isn’t leading the revolt, he certainly is a standard bearer.

The ARC board is scheduled to vote on the proposed bylaws at its September meeting.

At the Feb. 4 meeting of the Fayette County Issues Tea Party, Brown delivered remarks and a presentation that states:

ARC’s past chair was Tad Leithead, who chairs the Cumberland Community Improvement District, which Leithead’s linkedin.com profile says is “directly responsible for almost $3 billion of transportation improvement in Cobb County.”

Leithead also serves on the board of the North Fulton CID, which is chaired by Kerry Armstrong – the current chairman of ARC’s board of directors. 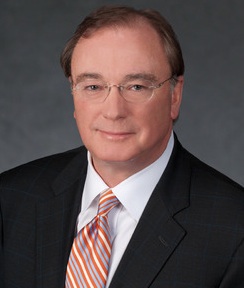 ARC Chairman Kerry Armstrong has come under fire for his work in the development field.  Credit: atlantaregional.org

Armstrong now serves as a senior vice president at Pope and Land Enterprises. Armstrong previously served nearly 22 years with Duke Realty, which absorbed his former employer of Weeks Corp. and before that A.R. Weeks and Assoc., and is a past chair of the Gwinnett Chamber of Commerce and a number of other locally significant organizations, according to an announcement of his hiring by Pope & Land.

Incidentally, Armstrong’s former business associate, Ray Weeks, was named in 2005 by then Atlanta Mayor Shirley Franklin to chair the Atlanta BeltLine Partnership, the organization that was to raise private funding to build the public amenities associated with the BeltLine.

For its part, the ARC contends the bylaws revision is a simple housekeeping matter.

The bylaws need to be updated to “align the bylaws with the current operating environment,” according to a summary the ARC released Wednesday. This step is the necessary outcome related to the vote by the ARC board in 2011 to adopt an “Evolution Strategy and Plan,” according to the ARC.

The proposed bylaw changes named in a summary by Cherokee County Chairman Buzz Ahrens include topics such as “Revised purpose, objects and functions language,” and “Updated and clarified board membership and terms of office,” and “Drafted a stand-alone ethics policy.”

“I don’t hold anything against anybody in this room,” Brown said. “I don’t want anyone to take anything I say that way. … I respectfully disagree with the point of a CID board member being a citizen member of ARC.”

Incidentally, President Obama is the bigger target of these groups’ broader effort to combat what they perceive as efforts to create a mandatory regional government in metro Atlanta.

Their prime example of the Obama philosophy is the regional transportation sales tax proposed in 2012, which would have compelled counties to participate regardless of their voters’ wishes.

According to the Transportation Leadership Coalition, represented by Field Sercy at Wednesday’s meeting of the ARC board, the ARC’s proposed bylaws will put the ARC even further away from the control of voters.

“I want you to see that, at the end of the day, taxpayers and voters are in change of this government,” said Viola Davis, president of Unhappy Taxpayers and Voters.

“If these changes are approved, then ARC will go even further off-track than it was intended.”