Sidney Poitier in the movie "A Raisin in the Sun"

For those of us of a certain age, be we black or white or something in-between, the miracle of Sidney Poitier remains as indisputable as it is somewhat inexplicable.

Here was this smashingly handsome man, the epitome of the Noble Negro (or Magical Negro to some) who somehow executed a racially charged balancing act that most of us could never manage, much less understand.

There never was anyone like Sidney Poitier and, as this film’s A-list acolytes (Spike Lee, Harry Belafonte, Morgan Freeman, Denzel Washington, Andrew Young, among others) eagerly attest, there never could be again.

For years, he carried the burden of representing an entire race, and he did so with a touch so true, so attuned to the often-obscene echo chamber of our mid-century life, that it’s almost impossible to imagine cinema without him. 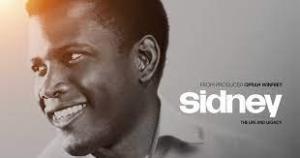 Movie poster of “Sidney” – a documentary about Sidney Poitier

The documentary “Sidney,” directed by Reginald Hudlin and dotted with the above bright and shining names isn’t in and of itself a brilliant work. It doesn’t need to be. Its brilliance consists of letting us learn the Poitier backstory z – not the whole backstory; Hudlin only has 2 hours – as best we can.

This is not the warts-and-all version.  It is, rather, unabashed hagiography with, here and there, a maybe a wart peeking through. Nor is the film executed with any cineaste flourishes. It’s straightforward and plainspoken and that, I think, is the key to its power.

Because think about it. Who else could have negotiated the racial labyrinth that was 20th-century America in general and Hollywood in particular? In his very first film, “No Way Out,” as he enters the operating room, Dr. Poitier hears his patient protest, “I don’t want him! I want a white doctor!”

And so, it goes.  “Cry the Beloved Country,” “Blackboard Jungle,” “Porgy and Bess,” “The Defiant Ones.” Good pictures, but not quite enough to make him a star. Then his buddy Harry Belafonte turns down “Lilies of the Field,” and Poitier becomes the first black man to win an Oscar (the year is 1964; his only predecessor is Hattie McDaniel in 1939).

Meanwhile, Poitier’s iconic presence is needed on another front. Namely the Civil Rights Movement. Young notes that, back in the early ‘60s, “Harry and Sidney made this a global event before Martin Luther King said a word.”

Before we get to the Summer of Sidney, as I think Lee dubs it, i.e., 1967 with the triple whammy of “In the Heat of the Night,” “To Sir, With Love,” and “Guess Who’s Coming to Dinner?” the movie makes certain we have the basic biographical facts.

Born in 1927 in the Bahamas (two months premature and expected to die), young Sidney moves to Florida and encounters his first “For Colored Only” signs. He washes dishes in Hell’s Kitchen where a kindly Jewish waiter teaches him to read. He works to get rid of his island accent by listening to the radio. And then a break: Belafonte (again) has to take a garbage shift, and Poitier, his understudy, goes on in the Broadway production of “A Raisin in the Sun.” Sidney Poitier in the movie “In the Heat of the Night”

It’s an awful lot to cover, and Hudlin does his best. But there’s a skimmed-over feeling, especially when we get to the crucial period in the late’60s when the Black Panthers are the new hip thing and Poitier begins to be smeared with the dismissive accusation of Uncle Tom-ism (The New York Times even writes an article “Why Do White People Love Sidney Poitier So?”)

“Was it lonely?” Poitier asks rhetorically.  “Of course.”

Here’s where “Sidney” could probably use another hour or maybe be separated into a 2-part series. That transitional time between the slap heard around the world (Poitier lets a white a-hole have it in “In the Heat of the Night”) and the actor’s switch to directing and less “weighty” projects is a crucial moment that deserves more examination.

Still, you leave “Sidney” feeling frankly uplifted. His balancing act has never been equaled – and has yet to be fully explored. At least this documentary is a good start. And at the end, when Oprah Winfrey, who also produced, breaks down in tears because, well, Sidney Poitier is so magnificently Sidney Poitier, you may feel like doing the same thing.

Previous Article
Enhancing the Resilience of Our Region
Next Article
Music in the Park – Elevate ATL on Historic Peeples St – West End – Oct. 9, 2022