The Sierra Club has named the Atlanta BeltLine as one of the best transportation projects in the country.

The BeltLine was included in the latest report of the national organization’s campaign titled, “Beyond Oil.” The campaign’s goal is to move the United States off oil in 20 years.

The Sierra Club of Georgia was among the earliest supporters of the BeltLine. During the recent campaign for a regional sales tax for transportation, the group opposed the tax – in part – because members thought the tax promoted sprawl and did not provide more money for the types of transportation options represented by the BeltLine. 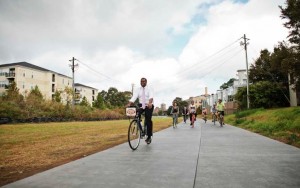 “We should heavily invest our transportation dollars in this kind of forward thinking, 21st century project,” Colleen Kiernan, director of the Georgia chapter, said in a statement announcing the release of the national report.

The BeltLine was included in a report titled: “Smart Choices, Less Traffic: 50 Best and Worst Transportation Projects in the United States.”

In introductory remarks, the report notes that some transportation projects continue a pattern of oil dependence and poor air quality, which is a result of tailpipe exhaust. One example cited in the report is the proposed Outer Beltway around Washington, D.C.

Atlanta’s BeltLine, on the other hand, is held up in the report as a good transportation project:

Kiernan described the BeltLine in broad language that invests the project with a lot of hope:

“Transportation infrastructure we build today will be with us for decades. We can and should demand the best use of our transportation dollars,” Kiernan said in the statement.

“The Atlanta BeltLine will give us the choices we need. The 22 miles of light rail and trails will help make getting to work, school, shopping and recreation without a car easier, make walking and biking in our city safer and increase our access to transit.”

The national report goes on to provide this description of the BeltLine: