The silent thud of public response to the pending completion of the Fall Line Freeway is an indication of how far the politics of roads in Georgia have evolved in 25 years.

There was a time the very words “developmental highway,” which is what the Fall Line Freeway is, sparked strong response from friends and foes. However, there was barely a peep after the state announced Wednesday the final contract to complete the road was let – for $53.8 million with completion set for 2015.

Georgia’s developmental highway program was nothing less than mind-boggling when created in 1989 by the Legislature. It now calls for establishing 19 development corridors along 3,273 miles of roadway. The ambitious goal was to place 98 percent of all Georgians within 20 miles of a four-lane road, according to the Georgia Department of Transportation.

The Fall Line Freeway is one of these corridors.

The Fall Line Freeway is a 215-mile freeway that crosses the state – and a host of intersecting highways – from Columbus to Macon to Augusta. GDOT has paid more than $500 million since its construction began, according to the department.

Once complete, it is to promote trade routes across the state and unblock the route from the industries of Columbus to the port of Savannah.

The final segment to be built by 2015 stretches nine miles, between Ga. 24 and U.S. 441. The road is south of Milledgeville, in Baldwin and Wilkinson counties. Balfour Beatty Infrastructure, Inc., of Fleming Island, Fl. will do the job.

This section of the freeway is a feat of engineering that helps explain why there’s not been a highway in the area previously.

Just this one nine-mile stretch of road will have a total of eight bridges across the Oconee River and two area creeks. 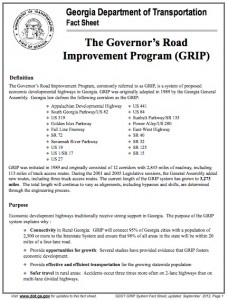 Back in the 1980s, criticism to the state’s developmental highway program emanated from across the political spectrum.

Some environmentalists complained about paving the way to sprawl, of paving over culturally significant areas, of hastening the end of some good things about Georgia’s rural heritage.

Other opponents criticized the idea of spending taxpayer dollars on “roads to no where,” highways that passed dying towns better left to fade quietly.

All the opponents ran into backers such as Bobby Parham, a fierce advocate for the developmental highway program named the Governor’s Road Improvement Program, or GRIP.

“I’ve spent four years on this [GDOT] board and 34 years before that in the Georgia House of Representatives,” Parham said in a statement released by GDOT. “A lot of my work during those years was devoted to the Fall Line Freeway. To finally see it completed and witness its benefits to Middle Georgia will be wonderful.”

Johnny Floyd is another strong supporter of GRIP. Floyd now chairs the state Board of Transportation, after serving the Cordele area in the state House from 1989 through 2007.

“This is a great day for Middle Georgia and a great day for the GRIP Program,” Floyd said in the GDOT statement. “The purpose of GRIP – to stimulate economic growth throughout the state – has never been more important than it is today. The Fall Line Freeway and the other GRIP corridors will help Georgians in their daily lives and also help us sustain and grow Georgia’s economy.”

Previous Article
Nature Conservancy buys 6,277 more acres along Altamaha River in Georgia
Next Article
Movies in 2012 – Eleanor’s choices for the 10 best and the 10 worst